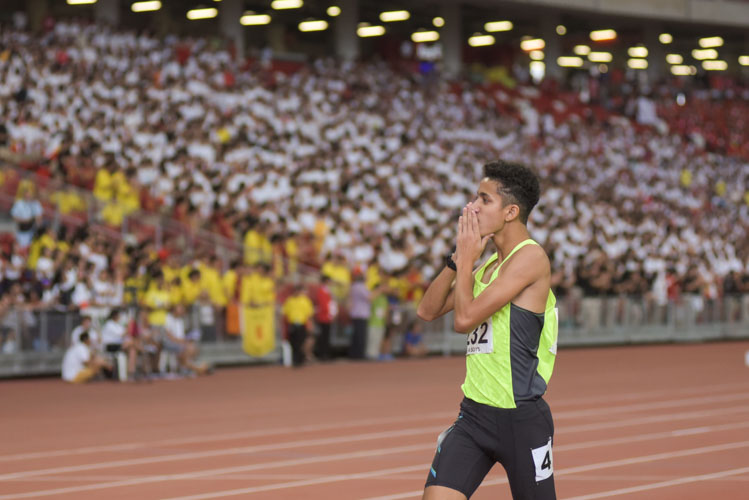 Syed Hussein Aljunied (#232) of Victoria Junior College clinched his third gold medal this season with a timing of 4:13.29 in the A Division boys’ 1500m. (Photo 1 © Cheah Wenqi/Red Sports)

National Stadium, Friday, April 28, 2017 — After winning golds in the cross country and 5000 metres this year, Victoria Junior College’s Syed Hussein Aljunied sealed his treble of distance titles with victory in the A Division boys’ 1500m at the 58th National Schools Track and Field Championships.

The first-year VJC student stopped the clock at 4 minutes 13.29 seconds, a good seven seconds ahead of Raffles Institution’s Shafiq Anshad (4:20.83) – who had also won 800m silver – and VJC teammate Gabriel James Neo (4:24.79), who claims his first medal this year after only finishing fifth in the 3000m steeplechase.

For Hussein, he has essentially completed a double-treble, after also clinching a hat-trick of golds last year – in the cross country, 1500m and 3000m – while running for Pasir Ris Secondary in the B Division.

Hussein’s gold-winning time still fell short of his personal best of 4:11.16 clocked at the 43rd Singapore U18/U20 Athletics Championships in March, and the A boys’ electronically-timed championship record of 4:06.40 set by Anglo-Chinese Junior College alumnus Nigel Foo in 1995.

However, Hussein shrugged it off. “After the first 300 metres I already knew that it wasn’t going to be a good time,” he said. “So I just came out there for the win.”

Still with a year left in the A Division, Hussein has his sights set on securing a triple-triple next year.

“Of course it would be harder next year to retain the golds,” he said. “This is only my second time so hopefully I can do it once more. It will be harder but I would have to work towards it.”

Maintaining that he has no regrets for the season, Hussein said, “This season has been going really well for me – I went for my first overseas competition at SEA Youth, so I’m really happy and I couldn’t have asked for more.”

“(The Asian Youth meet) is going to be harder than SEA Youth, but there’s going to be a good field (of competitors),” he said. “So hopefully I can do a good time, and hopefully even win a medal if everything goes well.”

In a measure of his incredible range, Hussein stormed through a sub-50s second leg for VJC’s bronze-winning 4x400m run barely two hours after his 1500m final, helping the school clinch its first medal in eight years in the relay.

While Hussein’s two golds at the track championships have helped contribute to a good showing by VJC – they finished third overall in the A boys’ standings, and second in the A girls’ with six golds – Dave Tung finally claimed St. Joseph’s Institution’s first and solitary gold this year in the B boys’ 1500m final.

Dave’s win also gave him his only medal at the track championships this year, after only managing 13th place in the 2000m steeplechase. It also improved on his individual fifth-place showing at this year’s cross country championships.

Additionally, it is Dave’s second 1500m gold, after also winning in the C Division in 2015 – the same year he had won cross country gold. Last year in the B Division, the best he achieved was silver in the steeplechase, adding to a pair of fifth-place finishes in the cross country and 1500m – two races which were won by Hussein.

This time in the 1500m final, Dave had a go from the start, before HCI’s Ethan inched forward to lead the pack after 300m. Dave sat and sat, waiting for the right moment to pounce. And finally in the last 200m – knowing it was his last race in SJI green – Dave kicked. And kick past Ethan he did, all the way to the finish.

“It’s my last year racing for SJI, so I wanted to do my best,” said Dave. “It’s all about the mental game when everybody is the same as you.”