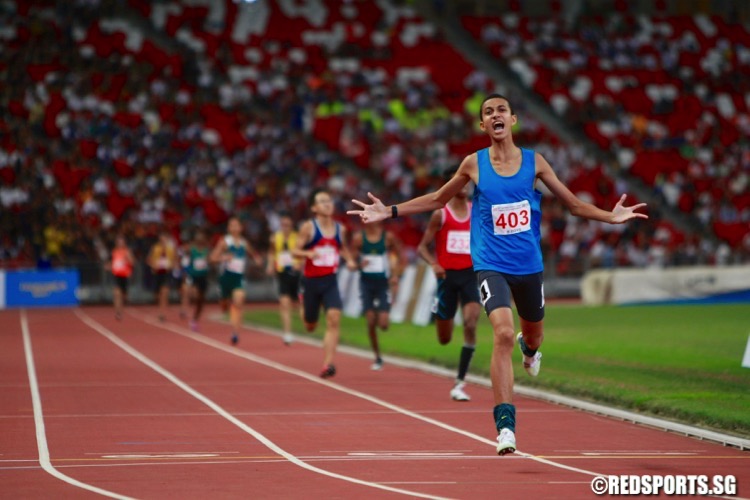 National Stadium, Friday, April 29, 2016 – In an exhilarating race, Syed Hussein of Pasir Ris Secondary managed to edge out the competition and take home the B Division Boys’ 1500m gold with a timing of 4 minutes 15.33 seconds at the 57th National Schools Track and Field Championships.

Hussein also won the B Division Boys 3000m, and was also the B Division champion at the 57th National Schools Cross Country Championships held a month ago.

Hussein’s winning time is also faster than the A Division winner.

The electronically-timed record for this event still stands at 4:12.61, set by Anglo-Chinese School (Independent) alumni, Zachary Ryan Devaraj, in 2010. The hand-held record stands at 4:07.30, held by Bukit Batok Secondary alumni C Veeramani in 1994.

Thiruben of National Junior College and Joseph Hee of Nan Hua High came in second and third with timings of 4:18.18 and 4:19.11 respectively.

The race started off fast, with Hussein claiming the lead from the start and establishing an ever widening lead. He maintained the lead throughout the first lap, followed by Thiruben and Philip Wong of ACS(I).

The second lap saw Hussein barely clinging on to his lead as Thiruben and Philip managed to close the gap. The trio maintained this status quo in the front until the start of the final lap, where Dave Tung of St Joseph’s Institution (SJI) surged into the lead and increased the pace.

Not one to back down from a challenge, Hussein sped up to regain the lead, followed by Thiruben. The latter kicked with 250m left to go, surging past Hussein, who refused to give up on the lead and stuck to his competitor.

Hussein and Thiruben were neck and neck in the final 150 metres, but a final-stretch kick by Hussein gave him the lead which he managed to maintain until the end to win the title, three seconds ahead of Thiruben.

When asked about the race, Hussein said, “The race was overall a good one, but my first 300 metres was too fast as I did it in around 45 seconds. The subsequent laps were good and I led all the way.

“At the 400 metre mark, someone cut into my lane and almost pushed me off the track but I managed to maintain my lead. I was also challenged by Thiruben in the last 400 metres but managed to overtake him in the end.”

“I was confident coming into the race, and the feeling of running in the Sports Hub felt great. Though I felt nervous and there was a lot of pressure, but during the race I remained focused.

“It was a good experience racing here and I hope they will hold races here again next time. I would like to thank my coach, parents, brother and friends for this win,” he added.