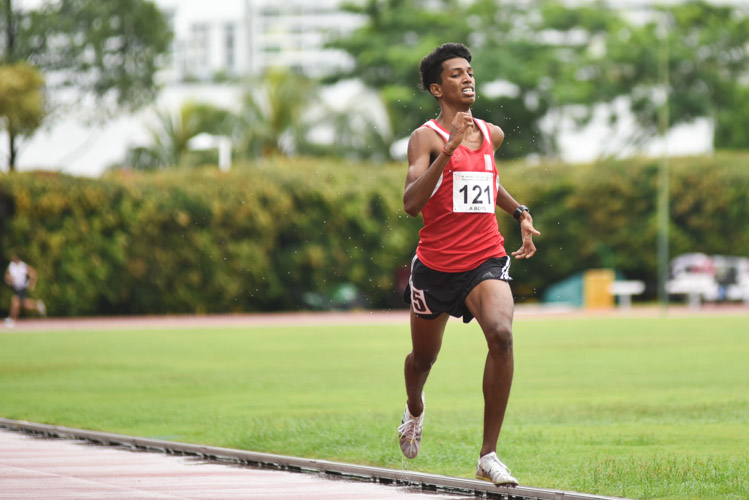 Bishan Stadium, Friday, April 21, 2017 — He had just claimed victory in the A Division 400 metres final, clocking the second-fastest timing in the event’s history at 48.71 seconds.

Silver medallist Shafiq Anshad of Raffles Institution finished more than seven seconds behind in 2:02.85, while ACS(I)’s Gideon Phong completed the podium in 2:03.25.

Thiruben burst forward from the get-go in the rain-delayed race, leaving his competitors at least 50 metres behind. He completed his first lap in an eye-catching 54s, and the rest was history.

“I feel really good because I hit my target for the first lap,” the 16-year-old said. “I guess the race preparation wasn’t as great as it could be, as there was a delay. During the warm up, I suddenly felt the fatigue of having so many races in one week, so I’m just glad that I pulled through and broke my PB by two seconds.”

This is Thiruben’s third straight 800m gold in the national schools championships, after winning B Division gold for the past two years.

Winning last year in 2:00.47, he had been attempting to break the two-minute barrier until the start of this year. The breakthrough finally came in February at the Singapore Athletics (SA) Series 2, where he clocked 1:58.50, with the help of good friend Syed Hussein Aljunied who ran 1:58.95.

From then on, Thiruben’s timings only got better – clocking 1:57.62 at the 43rd SA U18/U20 Championships, then 1:57.07 at the 12th Southeast Asian Youth Athletics Championships last month.

Having shaved five seconds off his personal best in a matter of months, Thiruben attributes his rapid improvement to a change of mindset.

“I think one of the main reasons that I’ve improved so much is a change in my race mentality,” he said. “Last season, I was too focused on the timings I was supposed to hit. I put a lot of pressure on myself to break the 2-minute barrier. But because I kept thinking about it, I wasn’t relaxed enough in my runs and that affected my timings.”

“This year, I decided to care less about the results, and focus more on enjoying myself. It really helped – being more relaxed, I find that I run better.”

“I would just like to thank him for showing so much belief in me, because prior to this season I did not expect to be improving so much. He has given me a lot of confidence to push my timings, and I wouldn’t have gotten here without his faith in me,” he said.

Moving forward, Thiruben is racing in the 800m at the 79th Singapore Open Championships, happening at the National Stadium next Thursday. He relishes another opportunity to lower his personal best time again.

“I would want to improve from today, maybe a 1:54,” he said. “I think it’s going to be a good experience, because I haven’t run an 800m at the Sports Hub before. It’s going to be a fast track, and there’s going to be a lot of competitors, especially those from overseas. So it’d be good to finally have people in front of me to push me, so I can hopefully break my PB again next week.”

“I think I’m peaking at the right time, in time for the Asian Youth Championships,” he added.

He said, “For the technical stuff like training matters, we leave it to the school, teachers, and coach. As parents, what we do is support him with all the daily makan, making sure he has enough rest, and also encouraging him to be humble and respect people. For my part, I always give him a massage after every race.”

The facilities maintenance supervisor took half-day’s leave to watch his son rewrite history in the 800m final. He said his wife had come down to watch the 400m final the previous morning despite just ending a night shift at work, so it was his turn this time. “Even if I’m busy, I would come down to give him my moral support,” he said.

Father, like son, is also a runner. In fact, Mr Verasalam had just returned from Daegu, Korea last month where he competed at the World Masters Indoor Athletics Championships. He clocked 59.32s in the 400m and 2:23.58 in the 800m.

Next month, he will compete at the Singapore Masters Open Track and Field Championships in the 400m, 800m and 1500m – the very same events his son specialises in.

In a reversal of roles, son guides dad as Thiruben tailors training programmes for his father, who usually trains late at night after work.

In a nice touch, Thiruben acknowledged his father’s huge influence on his running career.

He said, “My dad has been running since he was really young, but maybe since he grew up in Malaysia, he didn’t have as many opportunities as we have right now. He’s always been a role model to me – how he is still so fit, so active, even at his age. He’s really an inspiration to other people around his age.”

“I guess I would like to thank him for his genes too,” he added.

Now that he has secured both 400m and 800m golds, Thiruben’s attention turns to helping NJC do well in the relays.

He had little time to recover after the 800m final, as he ran the 4x400m relay heats in the afternoon, helping NJC qualify fifth-fastest for the final.

“This has probably been the most physically and emotionally draining week in my life, I would say. I’m just glad that my individual races are over and I managed to do well. It’s a huge relief,” he said.

Thiruben will also run the 4x100m relay heats next Monday.

On his expectations for both relays, he said, “I would say NJC are definitely underdogs, compared to the traditional powerhouses. But definitely, we have good team spirit going, and you never know what can happen in the relays.”