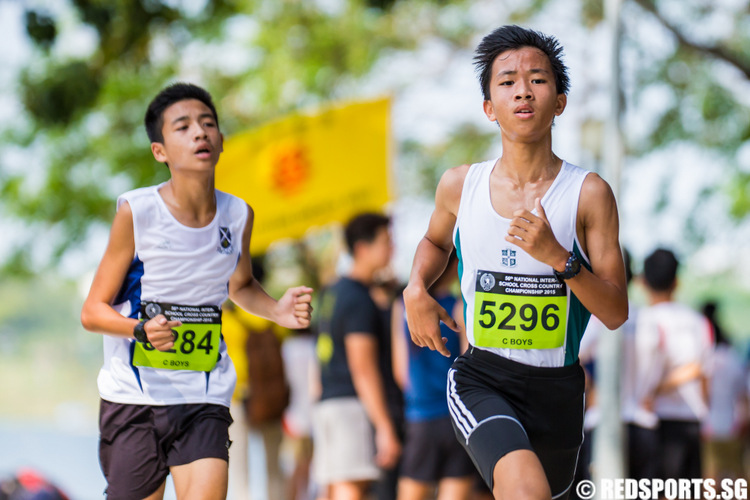 “I’m very happy with my race and extremely satisfied with my performance because I was not expecting such results in my current condition,” said the 14-year-old Dave. He had sprained his ankle just two weeks before the race.

Dave was glad that all his hardwork at trainings had paid off, which has eventually led him to taking a huge leap from 77th in last year’s race to first placing this year.

St. Andrew’s Secondary’s Jerrell Lim was the first runner-up with a timing of 12 minutes and 22.5 seconds. This is his second inter-school race and he was gunning for a top 3 finish. He was pleased with his performance, but felt he could push himself further.

In the girls’ race, Caylee Chua of Crescent Girls’ School won by a convincing 6.5 seconds over top contender Vera Wah from Cedar Girls’ Secondary. Caylee’s timing of 14 minutes and 6.7 seconds is a personal best.

Caylee Chua of Crescent Girls’ felt she had put in her maximum effort for the entire 3.6 kilometres race.

“I don’t think I could have gone any faster already. I really pushed myself and I’m very happy right now,” said the bubbly 14-year-old.

Vera made a costly mistake towards the end of the race, when she had thought the finish line was nearer and started the final sprint too early.

Eventually, Vera finished second in her debut with a timing of 14 minutes and 13.8 seconds. She felt that the pace of the race was much faster, but still manageable.

All four runners will be competing in the 1500m and 3000m races in the upcoming National Inter-School Track and Field Championships.

In the team event, Raffles Institution and Raffles Girls’ took home both the boys’ and girls’ titles.