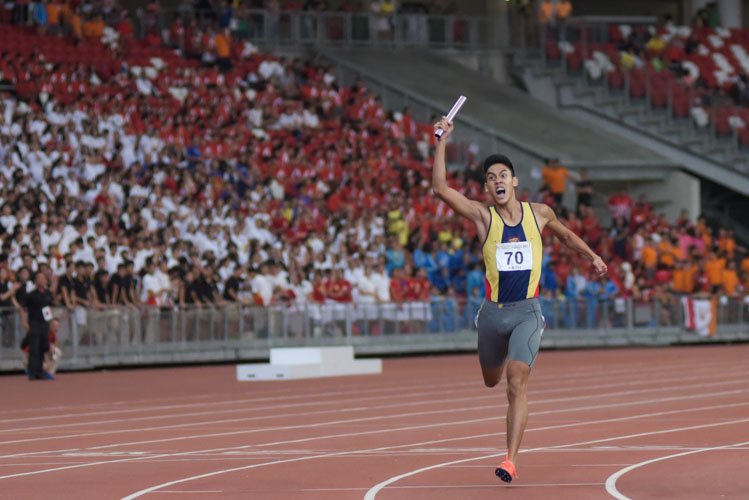 National Stadium, Friday, April 28, 2017 — The last time Anglo-Chinese School (Independent) won a relay gold at the National Schools Track and Field Championships was three years ago, in the C Division boys’ 4 by 400 metres.

Just like it was then, Joshua Lim anchored ACS(I) to a 4x400m relay gold again, this time in the A Division. The ACS(I) quartet of Ryan Lee, Oliver Lim, Peter Koh and Joshua Lim stopped the clock at 3 minutes 27.6 seconds.

The win gave ACS(I) only its second gold this year – the other being Samuel Lim’s in the C boys’ 200m – and also ACS(I)’s first ever A Division relay gold.

But it did not come easy.

Facing a couple of injury setbacks prior to the championships, Joshua could only express relief for the victory.

“(My team) has really been an amazing one to work with,” said Joshua, who won bronzes in the 200m and 400m this year. “I’m really glad that the whole team pulled together especially through so many setbacks throughout the year – one of our athletes tore his meniscus, and the other one broke his hand.”

David Tameeris, double silver medallist last year in the B boys’ 100m and 200m, was slated to compete in the century sprint and long jump this year – but suffered a torn meniscus just a few days before the meet began. He was a key figure when ACS(I) won the 4x400m at last month’s SPH Schools Relay Championships.

To compound the injury situation, Oliver sustained a broken thumb on his right hand – causing him to withdraw from the individual 400m and 800m.

Thankfully, he recovered from surgery in time for the relay final. With a brace wrapped around from palm to forearm, Oliver blazed through on the second leg for ACS(I)’s gold-winning run.

“I think throughout this whole season we just saw a lot of God’s grace just leading the whole team through,” said Joshua, who also holds the 400m record in both B and C Divisions. “Especially through such a trying time, we managed to pull together, and work together well as a team. So it’s really been amazing. I thank God for such a wonderful team and wonderful season, and we thank God in victory and in defeat.”

Based on the event’s recent history, the race saw an unconventional top three, with St. Andrew’s Junior College (SAJC) claiming the silver in 3:28.82 and Victoria Junior College (VJC) the bronze in 3:31.12. It meant that traditional powerhouses Raffles Institution (RI) and Hwa Chong Institution (HCI) were both denied of the podium, finishing fourth and fifth respectively.

The last time both RI and HCI finished outside the top three in the A boys’ 4x400m was eight years ago. Coincidentally, it also happened to be the last time VJC ended up on the podium in this event.

Even prior to this final, VJC were not fancied for a medal – qualifying only sixth-fastest from the heats. But with a change of two runners for the final, they altered the script.

VJC were in the lead by the end of the second leg, aided by Syed Hussein Aljunied’s sub-50s split.

The first-year VJC student, who had won the 1500m final barely two hours earlier to add to his cross country and 5000m titles, expressed immense satisfaction in clinching a medal for his team.

“We came into the final in sixth (from the heats), so I was just hoping to do well,” said Hussein. “All I wanted to do was give them the lead, and give them a good feeling going into the next leg. My leg went well – I ran with tired legs, but I’m happy to have a sub-50s split even after the 1500m.”

“We don’t have any 400m specialists, and that’s what makes it even better to get the bronze.”

The VJC quartet was made up of Hussein, jumper Gerald Beh, 800m runner Hemanth Srinivas, and 100m-200m sprinter Alexander Singh.

Following sister Grace Shani’s lead – who earlier brought Raffles Girls’ School from fifth to second in the B girls’ 4x400m – SAJC anchor Dinesh Hulbert stormed through the last leg to clinch silver for his team, after receiving the baton in fourth.

“I think all we wanted to do was have fun and do our best since it was our last race for the school,” said Luke Chiang, who ran SAJC’s third leg. “We knew a medal was not going to come easy because all the teams had pretty solid individual 400m runners. We told ourselves we would be satisfied with whatever result, and that any medal would be a bonus.”

“In the end, we were happy with the result because it was a PB and a position better from last year,” added Luke, whose other relay teammates were Dillon Lim and Sheldon Ow on the first and second leg respectively.

Despite missing out on the podium in the meet’s last race, HCI and RI had done enough to top the overall A boys’ divisional rankings in first and second respectively. HCI’s title adds to three other overall trophies they had secured in the boys’ B and C Divisions, as well as the A girls’.

VJC and ACS(I) finished third and fourth in the A boys’ standings, with SAJC seventh.