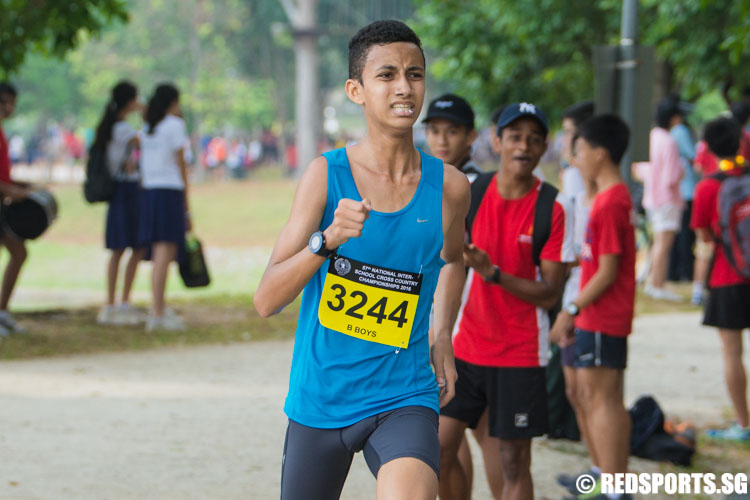 Syed Hussein of Pasir Ris Secondary emerges as the champion in the B Division boys race with a timing of 16:01.66. (Photo 1 © Jerald Ang/Red Sports)

His timing set a new course record, and he was the fastest boy across the A and B Divisions.

His time was almost 14 seconds faster than the 16:15.07 that Isaac Tan of Anglo-Chinese School (Independent) clocked to win the A Division race. The boys in the C Division ran a shorter distance of 3.65km.

Earlier this season, Hussein had also emerged first in his category in both the Singapore Athletics Cross Country and Wings Cross Country championships. For last year’s National Schools race, he did not finish as he was pushed midway, so the scintillating form that he has shown this year is redemption for him.

This was his first ever individual win in a National Schools cross country race.

Hussein led this race from start to end as he finished almost 10 seconds ahead of his nearest competitor, Ruben s/o Loganathan (16:11.26) of Guangyang Secondary. The front pack started out at a reasonable pace, and as they reached the hilly portion of the route, Hussein began to open up his lead.

Ruben then started inching closer again when they approached the turning point of the route, closing the gap to only five metres at the curve.

Alas, in the second half of the race, Ruben began to tire slowly as Hussein took the opportunity to quicken his pace and pull away, and then kicked towards the finishing line.

Hussein, a Secondary Four student, was the only representative from Pasir Ris Secondary and trains individually under Mr Ghana Segaran, who is the Chairman of Cross Country and Road Running at Singapore Athletics, and also the national coach for middle and long distance running.

“It is very lonely during trainings, but then sometimes it also helps me during my races with the fact that I don’t depend on others – so I can run independently and run at the front,” he said.

“I want to thank my parents, my coach and also my school teachers, especially my teacher-in-charge Mr Ow Kok Meng – he’s the one who let me run all these races.”

Hussein has big goals for the upcoming National Inter-School Track and Field Championships in April – to clinch the gold medal in both the 1500m and 3000m events, and also break the championship record for the latter event. The current championship mark of 9:21.26 for the B Division Boys 3000m has stood for 13 years.

The last boys’ B division runner to complete this exact treble of titles was Heng Yu Jie, then of Catholic High School, in 2012.

Meanwhile, it was not all gloom for Ruben, as his second-place finish greatly helped Guangyang Secondary clinch the B Division Boys’ team title for an historic first time. Brian Ye (7th), Yogaraj Rajendran (17th) and Try Aprison (37th) made up the other three runners from Guangyang to first cross the finish line.

Guangyang’s achievement is remarkable because since unfancied Bartley Secondary won the B Division team title in 1993, the championship has only gone to a handful of schools – Victoria School (13 titles), Raffles Institution (3), Catholic High (3), ACS(I) (2), and Chinese High School (1).

Bartley had then beat Victoria by a single point, scoring 72 points. Guangyang’s title this year was won with 64 points, the most since then. Points are calculated from the positions of each team’s first four runners.

On his personal and team’s performance, Ruben said, “I feel really great because this is the first time I have done this well. But it’s not only my effort, it’s my team’s effort as a whole, so I have to say well done to them too.”

The B Division boys trained under an external coach, Rameshon Murugiah.

Zorndrix Dass, one of the Guangyang cross country coaches, said, “I’m very happy, the boys did very well. We actually didn’t know what to expect before today. Bur for today’s race, all of them did better than expected, better than how they usually do.”