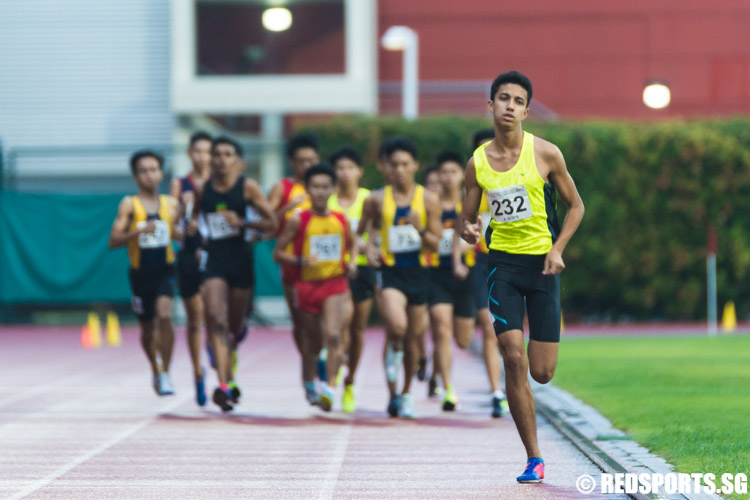 Bishan Stadium, Tuesday, April 18, 2017 — A treble winner of cross country, 1500 metres and 3000m titles in the B Division last year, Syed Hussein Aljunied is now one step away from replicating a similar feat.

Fresh from winning the A Division individual cross country crown last month, the first-year Victoria Junior College (VJC) student has earned his second gold this season in the 5000m at the 58th National Schools Track and Field Championships.

When asked if he had the championship record in mind, Hussein was quick to insist that it was not his priority.

The 16-year-old said, “I wasn’t going for the record, because I knew I’d be too far off. So I just tried to go for the win, and if I do a good timing, it would be a bonus. The delay (due to lightning risk) took a big toll on me, but in the end I’m happy with the win.”

The championship record still stands at 15:40.58, held by Darshananth S/O Jayaraman, then of Innova Junior College, since 2006.

On his race plan, Hussein said, “I planned to go hard at the start, but I didn’t want to go too hard that I would die at the end, so I tried to control myself, pace myself, and go from there.”

“I tried to go into the race without thinking about anything or anyone. I just had to overcome myself to do well.”

Hussein established a significant lead from the start of the race, one which he did not relinquish until the finish. Behind him, a middle pack consisting of Timothy, Isaac and Hwa Chong Institution duo Fang Yiyang and Er Wen Han were battling it out for the remaining podium positions.

Wen Han and Yiyang held the second and third positions for most part of the race, before losing out to stronger finishes by Timothy and Isaac.

“This is my first ever medal, so it’s a pleasant surprise,” said Timothy. “I wasn’t sure whether I could keep up with the front pack, but today was either go big, or go home.

Finishing fifth in the national schools cross country meet, Timothy’s silver showing this time round was one to savour for both athlete and his team.

Said Hussein of his teammate, “I knew he was in really good form, and I wanted him to do well, but I wasn’t really thinking that he would do that well. He really surprised me, and I’m really happy for him.”

Coached by Mr Ghana Segaran, Hussein has shown to be incredibly versatile across the middle to long distances. Clocking 1:58.95 over 800m and 4:11.16 over 1500m earlier this year, he also ran a huge personal best of 9:10.98 in the 3000m at the 12th Southeast Asian Youth Athletics Championships last month.

Definitely in the form of his life, the former Pasir Ris Secondary student will now look to complete his hat-trick of titles with a gold in the A Division boys’ 1500m. The event will take place on April 28 at the National Stadium.