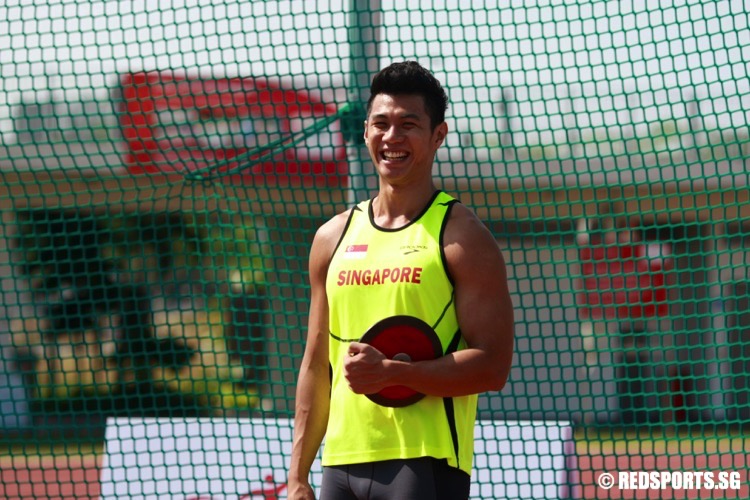 Landdis Su, a former distance runner in secondary school and a short period of time in junior college before he got injured, transformed himself into a thrower and will now represent Singapore at the upcoming SEA Games in the discus event. (Photo 1 © Les Tan/Red Sports)

When Landdis Su set about his injury-forced transformation from distance runner to discus thrower in 2008 while in junior college, he endured playful jibes from friends as he followed a strict eating schedule in an effort to bulk up. According to him, teachers were also skeptical of his decision to take up throwing and thought it a joke.

He then went on to win bronze in the A Division boys’ discus throw at the 2009 National Schools Track and Field Championships, achieving the rare feat of having won medals in both distance running and throwing events at the competition.

Speaking about the effort he invested to add mass to the distance runner’s body he used to have, Landdis said, “It was not easy for me. Back then, I had my mum cook chicken breast (a few pieces steamed that together added up to approximately 500g everyday) for me to bring to school. I would sometimes eat an omelette with rice at the canteen, and I also had my own tub of chicken to eat. People would laugh at me (for) randomly taking my chicken out and eating it at any point of time in the day. They would ask, ‘Why do you eat so much?’ Sometimes, I can even puke into my own plate from eating too much.”

As if the quantities of his diet were not nauseating enough, Landdis also had to put up with the smell of the chicken when it grew cold. He added, “The chicken was very dry. It’s first hot (when it’s cooked in the morning), but when it becomes cold, there’s this foul odour. I ate (portions of) it throughout the whole day. I recall even vomiting because it was so disgusting having to smell the chicken over and over again, without much seasoning.”

The reward for his resolution is a 90kg — up from the 63kg he used to weigh — physique that has been honed in the gym.

Time spent in the gym has been important for Landdis. When the communication studies major went on an internship last June to December, he would train after work. However, the track and field floodlights at his alma mater, Anglo-Chinese Junior College (ACJC), were often turned off, so he hit the gym instead. The gym work, done at ACJC under the eye of his mentor, coach Qu Zengchu, the ACJC track and field coach, coupled, ironically, with the time spent not throwing provided the platform for a breakthrough earlier this year.

At the Institute-Varsity-Polytechnic (IVP) Track and Field Championships in January, the 25-year-old recorded a personal best 44.62m, over three metres further than his previous best.

Landdis said, “During the internship, I didn’t have much time to throw because we ended work late. So I had to spend more of my time in the gym, doing strength work. Then, during end-December and the first few weeks of January, I focused on technique and more plyometrics work like sprints and jumps.

“This six-month internship period let me un-learn my (throwing) technique. I forgot the bad habits I had though I also lost the good ones. Then, when I learnt afresh, I could develop a better technique than before. So, after I threw a 44.62m, I felt exhilarated. As I was stuck at 41m for awhile (his previous PB of 41.04m was set in October 2013), I was quite demoralized. At points in time, I was thinking whether this was the best I could do, and whether this was it for me and whether I should continue throwing.”

That was not the only occasion that left Landdis dejected. He once attempted to lift 140kg (which would have been a 5kg personal best) with a clean and jerk (a composite of two weightlifting movements) that caused him to strain both his wrists.

“It (the strain) was very bad, until even turning on the light (switch) was painful. I was out for half a year and I couldn’t do much. My parents were very upset because they said it was very dangerous. They asked me to focus on my studies but it didn’t deter me (from continuing with his discus training),” said the left-hander.

Come the SEA Games, Landdis is aiming to surpass 45m. Even if that distance is some way off the gold medal mark of 51.32m thrown by compatriot James Wong at the 2011 SEA Games in Palembang, Indonesia, Landdis does not feel the pressure of throwing in the shadow of the retired discus veteran.

“I look up to him as a discus thrower because of his achievements, but I don’t feel pressured, because we cannot compare. My coach always tells me that I have to focus on my own goals and slowly make my way up,” said Landdis.

Landdis will have to face competitors taller and heftier than him at the SEA Games, such as Malaysia’s 1.89m, 102kg Muhammad Irfan Shamsuddin, the man who dethroned James at the last SEA Games as the region’s discus king.

While acknowledging that size helps to a certain extent, Landdis said, “When I go to a competition, usually, I am the smallest. It used to scare me a bit but not anymore. I realize that size is not the only factor because not everyone who is big throws well; there’s a technique component to it.”

He reveals that the biggest impediment to the technical execution of his throws and his performance is himself, specifically his mind.

Describing the process of the discus throw, Landdis said, “There’s a first rotation, then you land, then you throw. Every time I land, I always hesitate before I throw because it’s a natural reflex. If you’re always afraid of committing a foul, you’ll always be slowing down subconsciously, even though you’re telling yourself you want to move faster with your legs and your arm.

“I would say it’s about letting go and not being afraid of the foul, because it’s not about the average of the six throws (that throwers are usually allowed in a competition). It’s still the best one. It’s hard at points of time because it’s a pervasive habit of mine, and this will be the barrier. (I will) keep working at it and trying to relieve myself of this bad habit, so that I can reach greater heights.”

He reckons one thing that could aid him reaching those heights on competition day would be the support of the home crowd. Landdis said, “I would envision myself using the adrenalin from the sea of red (of Singapore supporters) and making sure that I throw to the best of my abilities. This is, after all, my first SEA Games, and even though I can be nervous, I think being in Singapore can have a calming effect.”