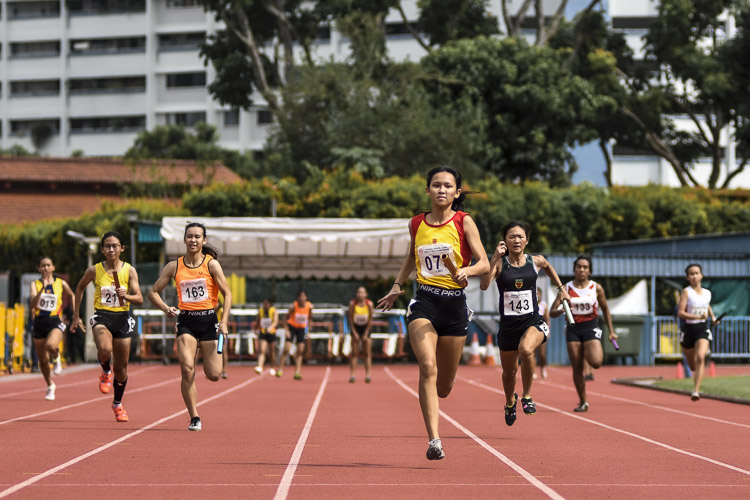 Bukit Gombak Stadium, Thursday, May 5, 2022 — With their tag as traditional powerhouses in schools’ track and field, one would think that Hwa Chong Institution (HCI) are dominant in the marquee relay events. They turned out to be, but not before erasing a few relay gold droughts in the girls’ A Division and C boys’ 4 by 100 metres at the 63rd National Schools Track and Field Championships.

“I was definitely relieved, because at the start I was quite nervous,” said Alexia after the 4x400m win. “But I was also confident that my teammates would do well and get us the lead.”

The 4x400m quartet, meanwhile, was made up of Alexia, Nikko Chng, Ho Zhi Ling and Heng Ann Xin.

“I felt nervous because RI were very close, and we knew that Sports School would put a good fight too,” said third runner Ann Xin, who placed fifth and seventh in the 200m and 400m finals respectively.

Zhi Ling, who ran the second leg, also acknowledged the nerves they were feeling going into the final.

“I think there was definitely some pressure because we expected to do quite well from our timings in the heats,” she said. “But I think all of us put up a good effort.”

Nikko, the only first-year HCI student amongst the quartet, played down the win and highlighted the strong bonds they have forged within the team.

“The team is very close-knit… so you always feel like no matter how you do, your coach and your team would be proud of you,” said the 400m hurdler who finished fifth in her final.

HCI sprints and hurdles coach Lee Cheng Wei, who has taken the school’s A Division female athletes under his wing for six years and the A boys for over a year, said his charges’ performances went beyond his expectations.

“I think they are happy with their performances, they really did above what I expected of them. All in all, I am very satisfied,” said the former national sprinter, a four-time SEA Games 4x100m relay silver medalist.

He also highlighted the strength-in-depth of the team, nothing that there were other fast athletes who did not run in either relay, inclusive of jumper Jade Chew who pulled her hamstring during the long jump event.

Crediting the team’s attitude, he praised the work ethic they put in during the pandemic-stricken period where competitions were few and far in between.

“It’s been tough, mostly for the athletes, because they struggled to get some sort of routine just to train,” he explained.

“But I would say I’m proud of them because sometimes even when I gave them home workouts to just keep up their fitness, they would go to parks to do some jogs on their own… they’ve been a great bunch to coach,” he added.

HCI’s relay double capped off another dominant overall showing from the powerhouses, claiming both divisional titles in the boys’ and girls’ A Division for the fourth National Schools meet in a row.

Meanwhile, HCI’s C Division boys also clinched the 4x100m relay gold, remarkably the school’s first in the division since 2002, back when they were called The Chinese High School. In that same period spanning 17 editions of the Championships, SSP won the C boys’ 4x100m nine times, RI and Anglo-Chinese School (Independent) three each, and Victoria School and Tanglin Secondary one each.

The HCI quartet of Jonathan Philip Hoare, Sun Zizhuo, Jervis Lim and Rafael Chong, who are under the tutelage of coach Han Zhong Jian, crossed the finish line first with a time of 47.34s, as Catholic High School claimed silver in 47.64s and RI took bronze in 47.86s.

Though it was HCI’s first C boys’ 4x100m relay win in two decades, it capped off their 20th straight overall team title in the division since 2001 (The Chinese High School).