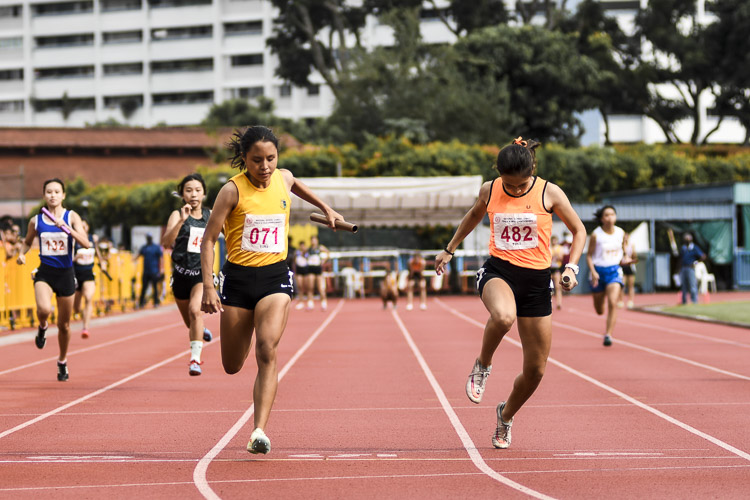 Bukit Gombak Stadium, Thursday, May 5, 2022 — Cedar Girls’ Secondary claimed three out of a possible four relay golds at the 63rd National Schools Track and Field Championships, clinching double relay victory in the girls’ C Division and crossing the line first in the B girls’ 4 by 100 metres race. It was the first time the school has won three or more relay golds in the same meet since the alumnae of 1999 also won both C girls’ relays as well as the B Division 4x400m.

“Our school track is a 280-metre odd-shaped track… I’m really surprised at the relay performances,” she added.

Cedar’s relay double in the C Division capped off another strong showing by the school, clinching their fourth C girls’ divisional title in a row.

“I’m quite proud for the 4 by 1, because I think it was one of the best starts I’ve had out of the three 4 by 1 races,” said Jia Yi, whose other teammates were Ayra Azman Tan, Ess Claudia Joan Shi En and Caelyn Chew.

Caelyn, gold medalist in the 800m and silver medalist behind Jia Yi in the 400m, said: “I feel very happy because my team got first, and it’s been a very long time since we got first… because in primary school we kept getting second or third.”

“There was a bit (of pressure), but most of the time we just encouraged one another so that we won’t feel the pressure,” added Caelyn, who has been running together with Jia Yi and Ayra since their days in St. Anthony’s Canossian Primary School.

Ayra, who took silver in the 80m hurdles event and placed fifth in the individual 100m, also admitted there were nerves going into the 4x100m final.

“I feel very proud of them, because even though we got first for the heats and semi-finals, I feel like there was big pressure because anything can happen during finals,” she said.

“The third runner Claudia, she was like freaking out… since she was freaking out, I was also freaking out… all of us were freaking out, but Coach Joy told us to be chill and calm down,” added Ayra, referring to teammate Claudia who placed fourth in the triple jump the same day and sixth in the long jump.

“I guess we just encouraged one another to chill and just focus on making the passes efficiently.”

Methodist Girls’ Chloe Chee, champion in the C girls’ 100m (13.19s) and long jump (5.12m), got the baton in fourth place in the 4x400m final before running a strong anchor to help her school finish with the bronze.

It was MGS’s first relay medal at the National Schools since 1998.

The B Division girls’ 4x100m final saw an equally thrilling conclusion as the Cedar seniors edged out Sports School by 0.08 seconds, stopping the clock at 50.06s against the latter’s 50.14s.

“Honestly, I couldn’t really take it in… it was so surreal to me,” said Cedar anchor Meredith Lee, who placed fourth in the individual 100m and fifth in the 200m.

“When I crossed the line, I knew I was first, but I still had that kind of doubt in my mind, like, was I actually first?”

Second runner Megan Ying, champion in the B girl’s long jump (5.26m) and silver medalist in the 100m (13.07s), pitched in: “I’m very proud of them, because it was not guaranteed that we were going to get first.”

“But Meredith pushed, and we all pushed, and we managed to come in first,” Megan continued, adding that the win was redemption for her individual 100m final, of which she was disappointed not to take gold after qualifying fastest from the semis with a personal best 12.90s.

Cedar third runner Nerys Elizabeth John also could not contain her disbelief after the relay final.

Lead-off runner Sharlene Soh rounded up, saying: “I’m very proud of all my teammates, and want to thank our coach for helping us get gold for this relay.”

The next day, Meredith and Nerys finished fourth in the 4x400m together with Calyne Low and Isabel Toh, in a race won by Singapore Sports School.