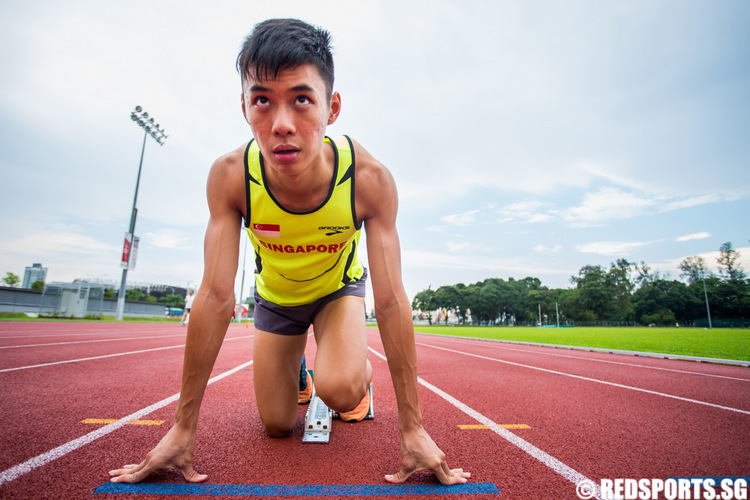 In 2011 and 2012, Ng Chin Hui was the season leader in the men’s 400m event with times of 47.97sec and 47.92sec respectively. The Anglo-Chinese School (Independent) and Raffles Institution alumnus looked the most likely to break Godfrey Jalleh’s 40-year-old national record of 47.4sec.

But that was before the 400m national youth record holder had to enlist for National Service (NS) and the emergence of 18-year-old Zubin Percy Muncherji.

Zubin would then go on to break the national record last year with a time of 47.29sec, as Chin Hui managed only a 49.92sec.

During those two years in National Service (which ended when he reached his operationally-ready date in December 2014), Chin Hui had to battle the frustration of not being able to train as much as he wanted.

He said, “During NS, when Zubin broke the (national) record and my other counterparts were doing so well, and I’m stuck there, (it was) really frustrating. I really wanted to get out and do something, but I couldn’t, so it was really frustrating and at times I couldn’t focus on what I was doing in camp.”

Explaining his efforts to reestablish himself at the fore of his event, the 21-year-old added, “The moment right after I finished (NS), I had to double up two sessions a day for about three months, to do whatever I could to get back on form. The first few months weren’t easy at all. But I can say that I’m really glad I somehow made it back. I wouldn’t say 100 per cent, but maybe 90 per cent on form, after the three to four months of really hard training.”

In his first race this year in January after returning to intensive training, Chin Hui clocked 49.30sec at the Track Series 1. By the Singapore Open Track and Field Championships in April, he cut down a further second to record 48.24sec, which is the year’s leading time by a Singaporean by two hundredths of a second over Zubin.

Chin Hui welcomes the challenge posed by Zubin. He said, “I’m happy for him. Having him as a competitor, I like the challenge. I don’t know how I’ll fair against him, but I think we will have a good fight.”

At this SEA Games, both of them will have to face the likes of Archand Christian Bagsit (47.22sec) and Edgardo Alejan Jr (47.45sec), who won gold and silver respectively in the men’s 400m at the last Games in Myanmar. Bronze medallist, Edy Ariansyah (47.78sec), is not entered for the 400m this time.

Having finished one position out of the medals, in fourth, in his maiden appearance as a 17-year-old at the SEA Games in 2011 in Palembang, Indonesia, Chin Hui is determined to avoid heartbreak this time, so much that he sometimes lies awake at night envisioning success.

“I’ve always had these nights when I just lie in bed and envision running the race, crossing the line, winning, and it gets me all very jittery and excited. It happens really often, randomly,” said Chin Hui. “I definitely want to finish on the podium at home. It’s been my ambition these few years. I was less than two metres away from the guy who got bronze (at the 2011 Games), so that was really painful to lose to him. I really know how much I want to win this time.”

A good result would bolster Chin Hui’s confidence to cast his eye on the biggest sporting stage, the Olympics, after having been snubbed for a 400m spot at the Asian Youth Games in 2009. The dream to compete at the Olympics has in part influenced his choice of university for undergraduate studies.

“I love sprinting. I do dream of competing in the Olympics one day, so that’s the ultimate dream,” said Chin Hui. “I first decided on the University of Oregon last year when I was still in NS, around July or August. I think Oregon is perfect for me because it is one of the best track teams in the US. Academically they’re pretty strong also. I dare not say how far it (the move) can take me, but I really think it is the stepping stone for me to go that much further. I’m really motivated and really excited to start training with them over there.”

But, before that, the athlete coached by Mr Loh Chan Pew hopes to create and bring with him some memories from home. Chin Hui said, “I want to see a big crowd, the whole stadium filled up. Loud cheers and screams when you walk past the grandstand. That fuels my adrenalin, so it’s very important to have the support of the home fans. That will really make the difference, because I will go in a lot more hungry, a lot more motivated to run a better race, to run a perfect race. And when the gun goes off, that’s it man. I’ll unleash everything I have all the way to the line.”