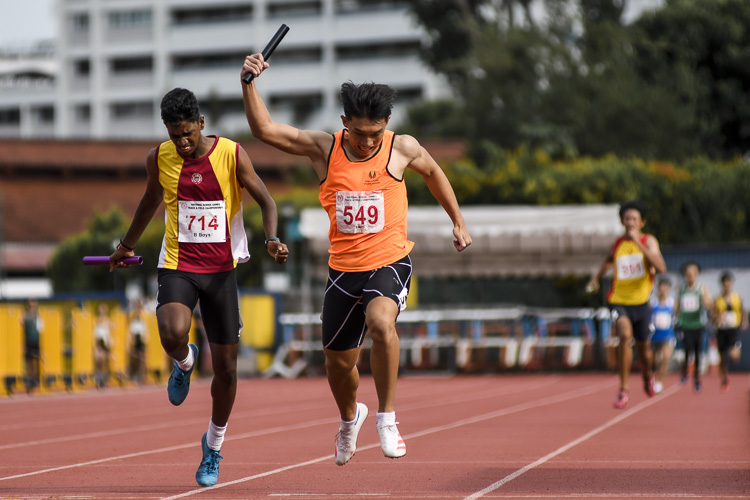 Bukit Gombak Stadium, Thursday, May 5, 2022 — When Singapore Sports School (SSP)’s Huang Weijun received the baton on the anchor in the B Division boys’ 4 by 400 metres relay final, he knew a massive winning streak was on the line for his school in the event. The B boys’ 100m-200m sprint king was up against Victoria School (VS)’s 800m champion and 400m silver medalist Subaraghav Hari who got the baton slightly earlier, and he understood the assignment.

Weijun took advantage of his speed to overtake the latter within the first bend, and never relented as he brought the gold home for SSP in 3 minutes 31.47 seconds, a marginal 0.18s ahead of VS (3:31.65). Hwa Chong Institution (HCI) took the bronze in 3:35.44.

SSP also holds the B boys’ championship record of 3:26.16 in the event, set in 2016 by alumni Shawn Jong, Chong Wei Guan, Irfan Qabeel and Marcell Tan.

“Before I ran, I was confident that I would catch (VS’s Subaraghav) after the first 100 metres. After I overtook him, I had more confidence that we would win. But I must thank my teammates, I feel very proud of them,” he added.

Weijun’s 4x400m teammates Lucas Fun, Edsel Poh and Emir Muhammad Rashid acknowledged the stiff competition put up by their rivals during the final but relished the experience of competing this year.

“I was quite nervous… but I felt confident with every race that I ran, and I did well,” said third runner Emir, a Secondary 3 student running at his first National Schools. He placed sixth and seventh in the 200m and 100m finals respectively.

Second runner Edsel Poh, champion in the 400m hurdles and silver medalist in the 110m hurdles, said: “There was quite a lot of pressure, but I think I handled it well and I made use of it as motivation.”

“It was very scary (to run the 4x400m),” quipped Lucas Fun, the lead-off runner. “There was a lot of pressure but it was very fun also, because after I finished I could cheer for my teammates and watch the whole race.”

SSP’s continued domination in the B Division relays comes in spite of a shift in focus of its Track and Field Academy towards a Long-Term Athlete Development (LTAD) model, which avoids early specialisation in events. It is this approach that has seen the school produce multi-eventers such as national under-20 decathlon record holder Kang Jun Jie and recently-crowned national U-20 heptathlon record holder Tyeisha Khoo.

This versatility amongst SSP athletes is also exemplified by the school’s quartet that set the B boys’ 4x100m relay meet record (42.41s) in 2015 — which consisted of Jun Jie, who was mainly a thrower then, pole vaulter Joel Ho, 400m hurdler Muhammad Nur Haqim and sprinter Edwin Tan.

Lucas Fun, who won the B boys’ long jump and came in second in the high jump this year, is potentially the next multi-event prospect — he ran both relays and has also recorded decent performances in the 110m hurdles, javelin and shot put at other meets.

“We just focused on ourselves, not too pressured by other schools, and ran our own race… it means a lot to us, because we’ve been waiting for this moment,” said Afzal, who led a 1-2-3 podium sweep for SSP in the 110m hurdles final, finishing ahead of teammates Edsel Poh and Abdul Raqib.

Meanwhile, VS’s double relay silver in the B Division is their first double relay medal haul in any division since 2003, while it is the first time the school has won medals in both B boys’ relays in the same meet for at least 29 years.

SSP’s female counterparts also reclaimed the B girls’ 4x400m relay gold and clinched the 4x100m relay silver in the division, narrowly missing out on victory by 0.08s to Cedar Girls’ Secondary.

“It was an okay run,” said first runner En Yu, who took bronze in the individual 200m and placed seventh in the 100m hurdles. As the only Secondary 3 student in the quartet, it was her first National Schools meet.

“At first I was a bit skeptical about (running the 4x400m), I was just afraid I would let the team down… but it turned out fine,” added jumper and third runner Marsya, who claimed the long jump bronze.

Laavinia, the B girls’ 400m-800m champion, was satisfied with her performances at the meet and paid tribute to her teammates’ support.

“I was thinking about my team (when I crossed the finish line)… I want to make them and my coaches proud, and I was very grateful for the opportunity to compete after two years of Covid,” said the anchor runner.

Audrey, champion in the 400m hurdles and silver medalist behind Laavinia in the flat 400m, echoed her teammates’ sentiments of cherishing the opportunity to compete this year.

“There are less supporters in the stadium, but I still feel very happy because after two years, we get to compete and actually show our talent,” she said. “And we feel like our hard work has paid off.”

The B girls’ championship record of 4:01.98 in the event was set by 2011 SSP alumnae featuring Tallulah Braganca, Wendy Enn, Tyra Summer and Shanti Pereira.

Meanwhile, CHIJ St. Nicholas Girls’ silver in the 4x400m relay — spearheaded by B girls’ sprint double champion and anchor Jayme Ng — capped off the best overall showing by the school in 17 years, clinching the divisional title for the first time since 2005.

RGS’s bronze also added to their medal of the same colour in the 4x100m relay, making it the first time the school has won a medal in both B girls’ relays since 1999.