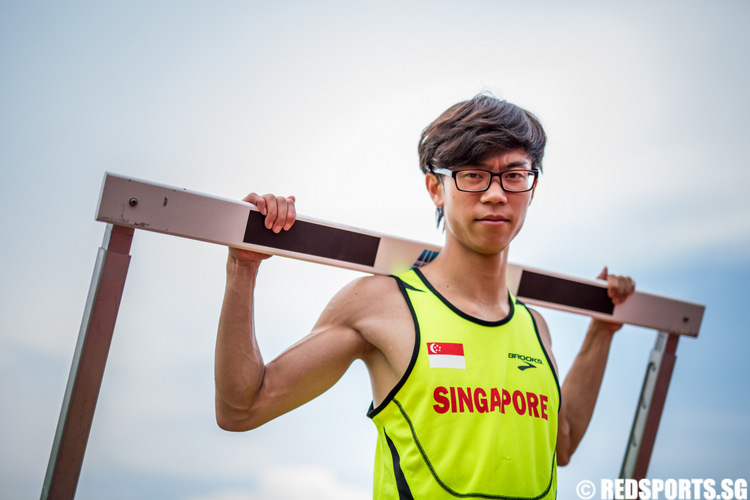 At 19 years of age, it was not long ago that Raymond Scott Lee was a Secondary Three student at St. Joseph’s Institution and decided to try the 400m hurdles event for the first time at his school’s Sports Day.

He won in a time his coach, C Veeramani, thought was promising and was thus encouraged to focus on it.

The next year, in Secondary Four, he made another breakthrough, qualifying for the final of both the 100m (in which he was contesting for the first time) and the 400m hurdles. He won silver in the 100m but it was in the longer event that he really signalled his ability, improving over five seconds from his previous year’s time to win the gold.

“That year (2012), I ran 55.04sec for my 400m hurdles. It was the first time I won a medal at National Schools. (It was) a gold and also a (still-standing) National Schools (B Division boys’) record,” said Raymond, who would go on to study at Hwa Chong Institution. “I definitely believed that I could achieve greater (things) because, when I ran the race, I felt it wasn’t the perfect race. I had the potential to go faster. I had been doing the event for two years and my competitor (referring to Calvin Quek, who finished runner-up to Raymond by 0.01sec but also broke the previous record held by Timothee Yap) had been doing it since he was in Secondary One.”

Later that year, he would see his peers represent Singapore at the Southeast Asian (SEA) Games in Myanmar.

“I remember a few of my friends, my batchmates, people like Zubin (Percy Muncherji) and Shanti (Pereira) – they went for (the SEA Games) and I felt that I wanted to be like them also,” said Raymond.

Fast forward two years and the National Service pre-enlistee has fulfilled his wish, selected as one of two representatives in the 400m hurdles for the upcoming SEA Games in Singapore. But, in the lead up to selection for the event, Raymond has had to contend with having to study and sit for the GCE A-Level examinations and an injury before he secured his spot.

“I took time off from training for about six months last year, so this year has been a real rush to get myself prepared to run a good time. I had to study for the A-levels. Last year, I was out almost the whole season with a lower back injury. I basically only ran one proper (400m) hurdles race (at the National Schools Track and Field Championships, where he clocked a personal best 54.67sec to win gold). My training was disrupted. A lot of stuff that I could have done last year to prepare myself this year was not done, so I had to really rush, restarting from square one,” explained Raymond.

But Raymond has managed to get himself up to speed in this race against time, and also finds himself in the 4x400m relay selection pool of six runners (alongside Zubin Percy Muncherji, Ng Chin Hui, Kenneth Khoo, Seow Yeong Yang, and Tan Zong Yang) after recording 50.01sec for the flat 400m at the Singapore Open in April this year.

Raymond professes that it is an honour to be part of the relay team, especially as he will have the opportunity to handle the same baton as Kenneth Khoo, the athletics team captain and veteran of five SEA Games (including the 2015 Singapore edition).

Raymond said, “Before I ran the 4x400m (at the Singapore Open) with Kenneth, I was really tired and mentally unprepared to run the 4x400m because I ran two races before that – the 400m heats and 400m hurdles heats. And they fell on back-to-back days, so I was really feeling sore, tight, and mentally quite a wreck. But before the race, Kenneth got us all together as a team and then he said that our countrymen are watching us, so we have to run fast and chase and not let the Philippines team get too far away from us. I felt that his taking leadership of the team and encouraging us – it really meant a lot to me.

“So, when I ran the race (as the third leg), I didn’t even think about it. I just ran hard and I felt that I ran quite a decent leg.”

Singapore finished second of two teams in that race, clocking three minutes 17.52 seconds, behind the Philippines’ 3:11.14.

Playing catch-up at the SEA Games will not faze the eloquent Angus Ross Prize* winner, who shared a lesson he has learnt from his years of racing the 400m hurdles. Raymond said, “You really got to fight for what you want. When I was in Sec 4, the race that I won my first medal (at the National Schools Championships), I actually was behind for the whole race, until about the tenth hurdle, which is the last hurdle. I was a little bit behind my competitor. I remember telling myself that I’ve trained so hard for this, I just had to go for it.

“It came down to both of us diving for the line, and I won by 0.01sec. It’s something that is so marginal that it could have gone either way. But I don’t think it’s about luck. You’ve really got to fight for what you want out there.”

When asked what he will be fighting for when racing on the National Stadium track at the SEA Games, he said, “I’ll be fighting to do my family and friends proud. This journey definitely has not been easy, and there’ve been a lot of people who have been there for me, and running my best would be a good way to repay them for all the things that they’ve done for me.”

The men’s 400m hurdles heats and final are scheduled for Tuesday and Wednesday, June 9 and 10, 2015, respectively. See here for full schedule