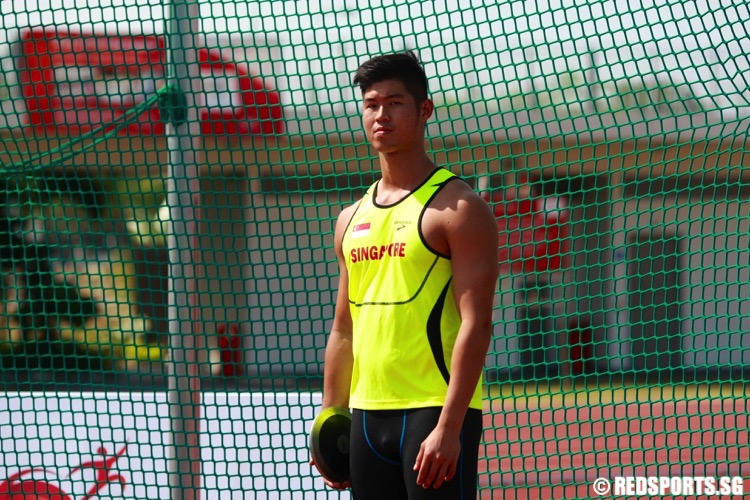 In the wake of the retirement of James Wong, Singapore’s nine-time Southeast Asian (SEA) Games discus champion, Benny Lam has emerged as the Republic’s top discus thrower since taking up the sport slightly more than a year ago. (Photo 1 © Les Tan/Red Sports)

Benny Lam was active in competitive sports from the age of 10, but while he tried out sprinting, the high jump, triple jump, shot put, volleyball, and basketball from primary school to junior college, he did not start throwing the discus until February 2014, one month after he reached his national service operationally-ready date (ORD).

In the span of a year, the Singapore Institute of Management undergraduate has catapulted himself to the top of the men’s discus rankings in Singapore and will be representing the Republic at the Southeast Asian (SEA) Games.

Explaining how he found his way into discus throwing, Benny said, “I’m a relatively new discus thrower. I ORD-ed from the army, and so I wanted to do something because I’ve always been active in sports. Without sports in my life, I would feel that something is missing, so I went to find my basketball coach from Catholic High School and joined a basketball club outside. After awhile, my coach recommended me to (nine-time Southeast Asian Games discus champion) James (Wong). My coach thought that I could make the cut as a thrower.”

The 22-year-old then started training with James every weekday and had his first taste of competition at the Track Series 4 in March 2014, when he recorded a distance of 34.84m. By August the same year, he improved his throw by almost 10 metres to 44.31m at the Singapore Open.

Benny had a quieter second half in 2014, throwing 42.05m to finish fourth at the ASEAN University Games in December. Benny, now coached by Jana Lauren, has progressed in his second year of the discus.

In February this year at the Track Series 2, he recorded a throw of 46.71m before furthering his personal best to 47.11m at the Singapore Open in April.

At 1.93 metres tall and weighing 100 kilogrammes, Benny has always stood out with his physique.

“In Catholic High, I was put into the volleyball team (which won the south zone title and placed third at the national schools championship) in Secondary Two because they needed tall players. Then the basketball team (which won the national schools C Division championship later that year) needed more tall players. I was quite interested in basketball so I just went ahead for training,” said Benny, who also did the triple jump in Secondary One and Secondary Two.

“After Secondary Two I had to focus on just one sport. So I chose to go to volleyball. I didn’t really enjoy jumping and running around the track so much. After I see the track every day, I just got tired of the track. And that’s when I realised I actually hated running quite a lot.”

It took some time for Benny to find out where his interests lay but he decided in time for the first SEA Games on home soil in 22 years.

Benny, who works as a personal trainer at a gym in his spare time, said, “I’ve always been into tests of strength. When I was younger, I liked to arm-wrestle, challenge bench press, and testosterone-laden sort of activities. Throwing is kind of similar although it’s not purely just a test of strength. It allows me to hit the weights rooms very often, which is something that I enjoy. One of the best things is that I don’t have to run a lot. I just need to have a short burst of energy. So it’s a very good combination.”

Making his debut at the region’s marquee sporting event with just over a year’s training under his belt, Benny knows he is up against the odds to win a medal. The bronze medal-winning distance at the last Games in Myanmar was 51.96m by Indonesia’s Hermanto Hermanto.

Benny said, “When I first started I told myself a realistic aim would be for me to participate in the 2017 SEA Games. I’m very privileged to be given this opportunity (at the 2015 SEA Games), so I’m going to try my best. I’ll aim for a personal best.”

And if that personal best is anywhere near 50m, it could bag him a surprise medal and cap off what is already a meteoric rise.