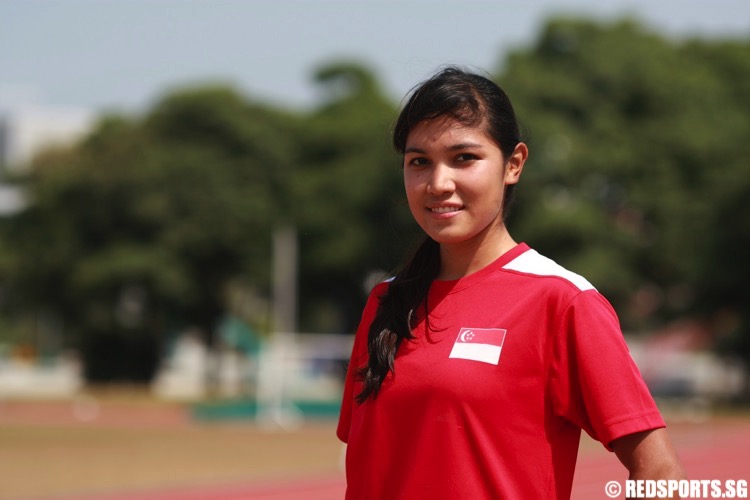 When Nurul Jannah Binte Mohd Zulkifli, then 15 years old, competed in the long jump at the 2007 International Children’s Games in Iceland, a 5.68m effort not only earned the then Singapore Sports School student a personal best, but also ownership of the national age-group records for under-17, under-19, and under-23 girls, and the national junior and youth records.

With arguably her prime years still ahead of her, many observers expected her to soon break the national women’s long jump record of 5.88m set in 1993 by Yu Long Nyu. But the record still stands.

Now 23, Jannah is preparing to make her debut at the upcoming Southeast Asian (SEA) Games, where she’ll meet competition she has for years struggled to find locally.

Then, there is also Marestella Torres of the Philippines, who won gold at the 2011 SEA Games in Palembang, Indonesia, with a Games record of 6.71m. (Marestella also competed at the 2014 Asian Games but bowed out of the competition after fouling on all three of her attempts.)

“Knowing that I will be competing with Asian Games medallists totally blows my mind. I see them as role models but, also, competitors. Even if I lose to them, I lose against the best in Asia,” the Nanyang Technological University (NTU) undergraduate said.

She hit the sand-pit and the long jump at the age of 10, and has been the local standard bearer for the event since her Singapore Sports School days. The opportunity to now compete at the SEA Games has been a long time coming.

“I once had a talk with a Sports School staff member about the SEA Games. I’ve thought about whether I would have a chance to actually represent Singapore at the SEA Games because I know how high the standard is. Now, in 2015, I finally get the chance. Some people might think the SEA Games is such a small competition compared to the Olympics but it’s a big deal to me. Whether I get to compete (at the SEA Games) has always been a thing at the back of my mind,” Jannah said.

Eyes on the national record

Jannah’s 5.68m personal best has become more distant with every competition, although she came within a centimetre of it at a local club meet in 2012. This year, she recorded her third-best jump ever with a 5.54m effort at the Singapore Open a month ago.

She is the third-ranked Singaporean this year, behind Eugenia Tan and the upcoming 15-year-old Tia Louise Rozario. Having been top-ranked in the event for many years (including four of the last five from 2010 to 2014, with the only blip coming in 2013 when her season’s best 5.41m ranked her second behind Eugenia’s 5.47m), this situation is taking Jannah some getting used to.

“Over the years, I think there was a lack of competition. That changed recently with Eugenia’s rise. She’s going to be competing with me at the SEA Games. Now I know there’s someone to push me, which is good,” said Jannah.

That competition might just be the spur she needs to make the progress since her effort in Iceland all those years ago, especially as most of her peers and training partners from the Singapore Sports School have faded from the scene.

This leaves Stefan Tseng from the same group of long and triple jumpers coached by Valeri Obidko as the only other athlete who is still actively competing alongside Jannah. Stefan will also compete at the upcoming SEA Games in the men’s triple jump.

When asked why she has chosen to persevere, Jannah paused for a second to contemplate before answering, “I’m still not satisfied with what I’ve achieved yet. I’ve always wanted to stop but I just cannot let go yet – that ultimate goal, which is the national record.”

Towards that aim, Jannah decided to seek a change of environment in 2013 after close to eight years of training under Valeri Obidko.

“I was training alone. I had to travel from NTU to Woodlands (where the Singapore Sports School campus is), get (the training) programme from him (coach Valeri) then train alone. After awhile, I felt a bit bored, going back to the same environment for so many years and having nobody to train with. I decided it was time for a change,” Jannah said.

Coach Kamarul, as he is known, outlined his aims for Jannah. He said, “I want her to break six metres this year. She must cut down her speed to ensure that she will jump six metres or break the national record … because her technique is there already.”

Speed and technique aside, Jannah envisions something else when she lines up her jumps on competition day.

“When I did that (5.68m) jump in Iceland, they didn’t know who I was or where Singapore was. But the stadium was packed and they clapped for me. For a couple of jumps, I had an amazing feeling. With me getting the chance to jump in front of a home crowd, I just imagine it five times, ten times that magnitude of feeling. That is what I’m hoping for,” said Jannah.

Maybe that is precisely what Jannah has been missing all this while.