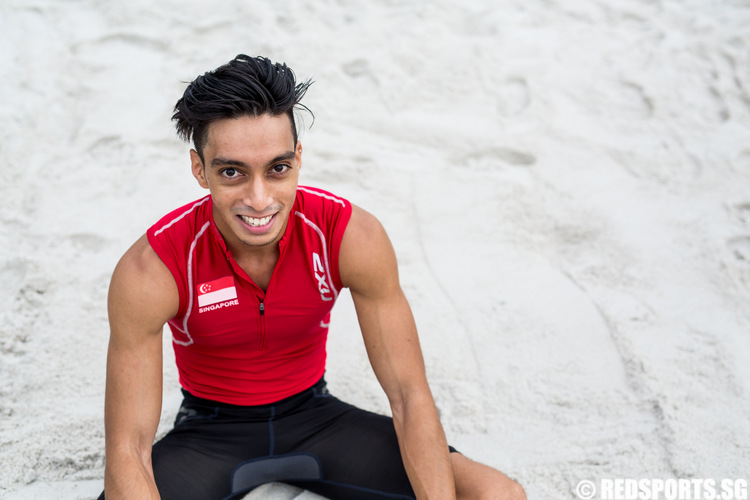 Khan Meng Linn’s first competition after completing National Service was the Institute-Varsity-Polytechnic (IVP) Track and Field Championships in January 2013. Then, he regarded the high jump as his pet event, even making it, in 2009, the focus of an ultimately failed bid to qualify for the Southeast Asian (SEA) Games in Vientiane, Laos.

Meng, as he is better known to friends, was also competent in the triple and long jumps too, having represented Ngee Ann Polytechnic in all three events with varying degrees of success (an IVP long jump bronze, an IVP high jump silver, and a POL-ITE triple jump gold) from 2007 to 2010.

The Singapore Institute of Management undergraduate smashed his then-personal best of 6.32m in the long jump with a 6.80m effort that earned him bronze at the 2013 IVP. That prompted Meng to change his mind about the choice of his pet event.

“That was a breakthrough for me. It (the improvement) was about 50cm. It basically gave me the confidence that, if I can improve by 50cm, (to jump) seven metres would be eventually possible. After that, I just decided to be serious in long jump and then continue and try to qualify for SEA Games,” said the Business Management major.

When asked how that improvement happened, Meng was bemused. He said, “I wasn’t expecting it because, going into that (competition), I was doing a lot of bodybuilding and weightlifting. Not specific to track at all so it was quite surprising for me.

“Basically, I was contemplating if I should even go for that IVP because I didn’t know what were my chances of winning a medal, and I thought that if I couldn’t, what was the point? Eventually, I decided to just go in for the points (that he could earn for SIM in the championship standings), and then I was surprised. So that was the turning point. If not, I might have just stopped (competing). Nobody else in my school was taking part (in the long jump) so I just decided, ‘Why not just take the slot (in the event)?'”

The 25-year-old has since cracked the seven-metre mark, after dealing with injuries that curtailed his 2013 season post-IVP. He first achieved the feat at the Johor Open in April 2014 when he jumped 7.10m, then improving it to 7.26m later that August at the Singapore Open.

As the top-ranking Singaporean long jumper, Meng, the younger half of a pair of twin brothers, snagged himself a spot on the SEA Games athletics team.

While the former secondary school basketballer and footballer hasn’t bettered 7.26m, with his best effort this year measuring 7.13m at a local club meet, he is optimistic of being able to eventually challenge the national record of 7.62m held by Matthew Goh.

Recounting that same IVP Track and Field Championships in 2013 when he made his breakthrough performance in the long jump, he said, “Back then, when I spoke to him (Matthew, who had still been competing and won with a jump of 7.03m), I had not broken seven metres yet. He’s the reason that I believe that all these is possible because he showed the path. If somebody has done it before, you know that it’s possible. It gives you the motivation to try.

“I’m actually expecting to break it, not this year, but, hopefully, somewhere in the middle of 2016. At this point, I’m not ready.”

At this point of time, also, the SEA Games is a month away, and even if Meng feels he is not ready to threaten the national record yet, a medal is not out of the question.

“If I’m at my best, bronze is a real possibility,” said Meng, who may have to jump in the region of 7.53m — the distance Pham Van Lam of Vietnam jumped for third position at the last Games — to mount the podium.

When asked what could propel him to do so, Meng said, “You obviously want a full stadium, a big crowd, but, apart from that, it’s all in yourself. You have to control what goes on in your head rather than what goes on around you. Most of the time, when I am jumping, my eyes are closed, so I don’t really imagine anything. I just try to go as far as I can.”