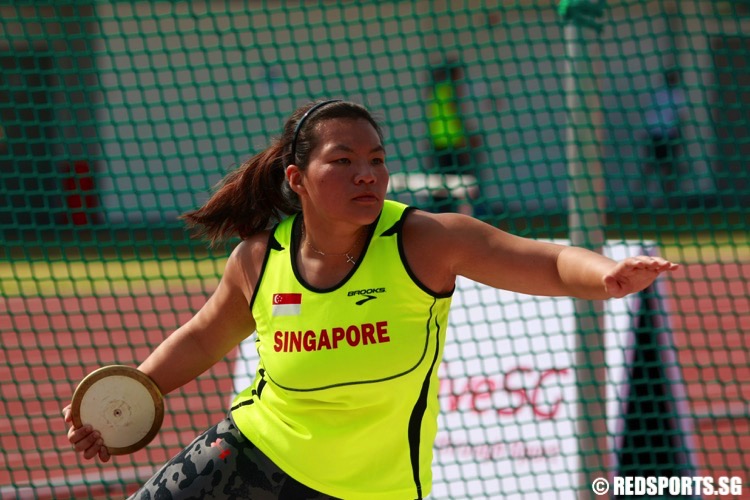 Hannah Lee training at the Kallang Practice Track. She set her personal best of 45.91m in the discus throw at the Jan 2014 Track Series 1. (Photo 1 © Les Tan/Red Sports)

On home ground at the upcoming Games, debutante Hannah Lee is aiming to contribute to a similar haul, while the 37-year-old Guirong is returning for a seventh SEA Games. Both of them will be Singapore’s representatives in the women’s discus and shot put.

With a personal best discus throw of 45.91m (set in January 2014 at a local track meet) and a season’s best of 45.56m (set at the Singapore Open in April 2015), Hannah is well-poised to achieve her goal as both marks beat Guirong’s silver medal-winning throw from the last Games.

If she does so, the 22-year-old will become only the second local-born Singaporean woman to win a SEA Games medal in a throws event after Wan Lay Chi’s 2011 shot put silver in Palembang, Indonesia.

“I’m aiming for a silver in discus and a really good personal best. Shot put, I think I’ll be very happy with a personal best and, if there’s a chance for a medal, I’ll definitely fight for it,” said Hannah, who started in athletics in primary school with the shot put and only began throwing the discus four years ago.

Hannah still regards Lay Chi, who is four years older and holds the national junior, national under-23, and other age group records for the girls’ discus and shot put, as a role model despite the latter’s retirement from the sport in 2013.

The pair even trained together in 2011 under the tutelage of SEA Games discus kingpin James Wong.

The Singapore Institute of Technology undergraduate said, “Lay Chi has always been and still is the athlete that I look up to. I remember when I was in secondary school and she broke the ASEAN Schools record (in 2005 for the discus) and came up with two golds (discus and shot put) to earn the Best Female Athlete award. Since then, I have always looked up to her.

“When I met her at 14 or 15, I was like, ‘She is really my idol.’ And when I trained with her for a period of time, I really respected her because she is what a good athlete is. She is strong, very powerful, naturally athletic, and she really gives her best in every training session. And that is one of my inspiration and motivation when I train now.”

Now coached by Jana Lauren, Hannah just returned from a two-week training and competition trip to Germany. She followed up a 45.53m — three centimetres off her season’s best — effort at the WLV Werfercup in Wiesbaden with a 45.14m at the Halplus Werfertage in Halle An Der Salle.

She feels the higher level of competition she was exposed to there, even when competing in the weaker ‘B’ category both times (finishing fourth and sixth respectively), have helped hone her mental strength.

“Instead of feeling overwhelmed by my inability to fight for a medal or a higher position, I focused on keeping my mentality on the right track, staying relaxed and focused on throwing well. That is the mindset I need to carry into the games and I’m glad for the opportunity to have practised that,” said Hannah.

With Guirong managing only a best of 41.14m last year, way shorter than her own national record of 49.91m set in 2003, the chances of a Singaporean woman breaking the 50m mark in the discus lies with the younger Hannah.

While her personal best is over four metres away from breaching 50m, Hannah knows not to discount herself given the right conditions. She said, “You’ll never know when you get it. My 45.91m (PB) – I didn’t expect it at all but, that day, things just clicked and there was great wind. My physical form now is better than it was last year so, even more, I believe that anything can happen. To say that I’ll definitely break the 50m mark this year – I think it would be honestly a bit far-fetched but one can dream so we just hope for the best.”