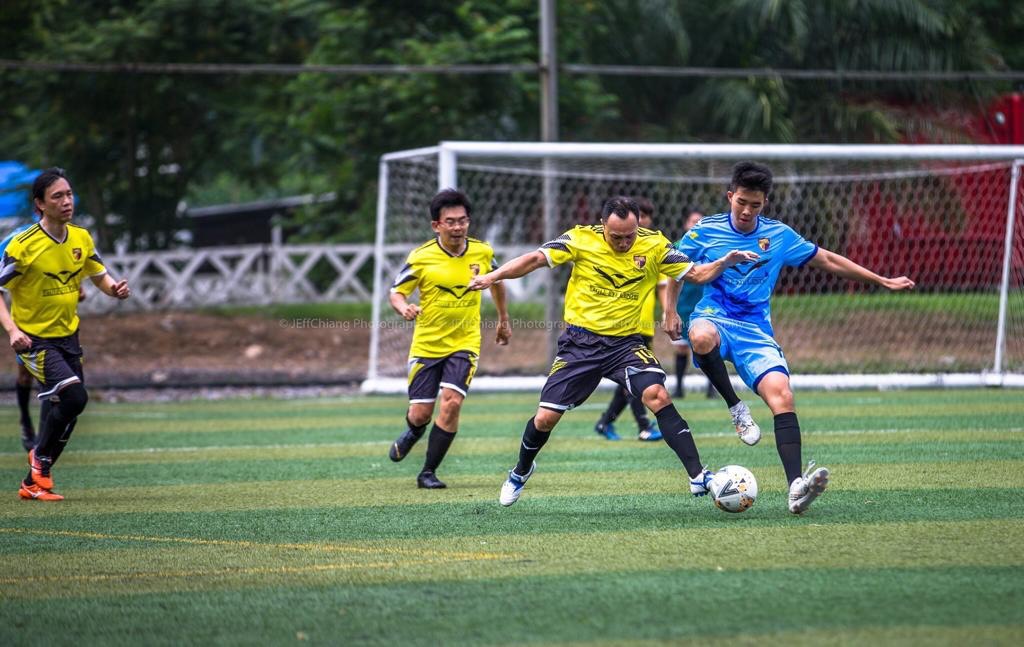 When the boys, who refused to be old, were ticked off by the ever-present prefect of the Old Boys’ Association for being overly rowdy at the annual Founder’s Day dinner in 2015, a wave of inspiration struck an indignant Chng Nai Wee (ACSS1985).

Instead of being straight-jacketed in the grand hall of Shangri-La, and pay through the nose for boring fare – just for the privilege of assembly with our cohort – why not we start an inter-year soccer tournament, where old boys can still be boys, and rough and tumble boisterously in the evergreens?

This was the raison d’être for the inaugural ACS Knights Eagle Eye 8-a-side Inter-year Soccer Tournament, a gathering of years ACS85, ACS89, and the cohorts as defined by the Secondary 4 years of 2000, 2011, and 2015.

Knights has been established earlier in 2018 as a fellowship of core and affiliated ACS alumni who bond through playing the sport of soccer. Its motto is “Our Hearts, Our Hopes, Our Aims Are One”.

Eagle Eye, the tournament sponsor, entered its own team Eagles to inject an element of unfamiliarity and competitiveness. What promised to be a sunny sweet affair by the congregation of a century of players, officials, and audience on the 28th of October 2019 – the Monday after Deepavali – on the full-sized artificial pitches 1, 2, and 3 at Turf City, turned out to be a thriller raining with sweat and tears.

William Kristanto (ACSI2000) was as colourful in his absence as was in his hard work in producing the swanky soccer jerseys, that were by themselves, simply eye-catching.

Once lost, boys like Jesse Chang (ACSP2007) and Derrick Lui Chien Leng (ACSP1988), returned to the warm embrace of the ACS Family as the proverbial loved prodigal sons.

In spite of the chasm between the ages of the youngest team ACS2015 and oldest team ACS85, there was all to play for in the round-robin format. Where the youths were speedy with vitality, the veterans countered with experience and guile.

The tough attitude was epitomised by a body block by Ong Eng Meng (ACSS85), as he shielded the ball but at the same time threatened to decapitate a grinning opponent.

(Ong Eng Meng has immortalized himself in ACS folklore as the flag-bearing ACS boy who was brought down by Rafflesians in the 1985 Rugby B Division Final at the Padang. That incendiary moment galvanised the entire ACS to rush against the RI, and if it wasn’t for restraint and compassion of the ACS boys, war would have broken out. Legend has it that OEM was responsible for having the principals of both schools march to the Minister’s Office.)

Scintillating against the azure sky, the huge silver trophy for the Open Age tournament was up for grabs. The more modestly-sized Veterans Cup was a direct head-to-head winner-takes-all between dark green ACS89 captained by Chen Wen Young (ACSS1989) and yellow ACS85 headed by Kenny Teo (ACSS1985).

Marauding relentlessly, ACS85 just could not nest the ball into the net. A quick counterattack by Aidil Idris (ACSS1989) found himself one-on-one with the goalkeeper, and he cooly slotted the ball in for victory in the dying embers of the game.

The initial burst of rapid-fire games under the blistering sun simultaneously across three pitches involving all teams was halted by an hour of teasing rain and flashes of lightning. The downpour that seemingly came from nowhere gave the teams a restful reprieve while the tacticians evaluated their play and tinkered with the lineups. The convergence of three fields into one made spectators of all players.

Meanwhile, ACS2015, otherwise known as IBDP Cohort of 2017, was sycthing through all opposition with a youthful effervescence akin to lawnmowers running amok on tender blades of grass. Blitzing ACSS85 4-0 within 16 minutes and blinding ACSS89 7-0 in the same spell, IBDP17 grounded the crimson Eagles 2-0, edged out ACS2011 1-0, and shared goalless spoils with ACS2000.

Nonetheless, the possibility of IBP17 being overtaken by ACS2000 in the last round of games ensured a tense nail-biting climax. An all-out assault by ACS2000 failed to shoot down Eagles who bravely forced a late 1-1 equaliser, leaving young blood IBDP17 with a trot towards the Open Trophy.

In the final match, ACS85, lit by Most Inspirational Veteran Player Award receipient Leong Weng Piew (ACSS85), rose to the occasion with a 2-0 upset of ACS2011 that was graced by Most Promising Young Player awardee Ngen Ge Liang (ACSI2011).

Unexpectedly, half-centenarian Chng Nai Wee became the oldest player to score from open play. Wrong-footing the defender, he cut the ball into the box and fired the ball diagonally low into the corner of the net beyond the desperate dive of Mohamed Khairil Anwar Bin Jasman (ACSBR2011).

It was no less fitting a finish to spark the crowd into cheers and bring the maiden tournament to a rapturous end.