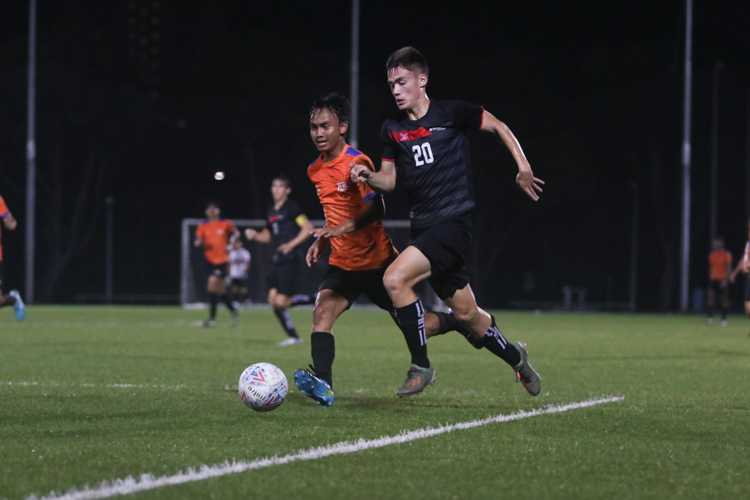 Ngee Ann Polytechnic, January 23, 2020 — Temasek Polytechnic (TP) blitzed National University of Singapore (NUS) in the first half and then held on in the second half to clinch a 2-1 victory, making them champions of the Institute-Varsity-Polytechnic (IVP).

Two goals in the opening 20 minutes by skipper Jacob Mahler (TP #17) and Jordan Nicholas Vestering (TP #4) proved too much for NUS who could only pull one goal back through a penalty as the boys in black celebrated winning their second title after securing the POL-ITE championship in November 2019.

“Finally, after three years, we’ve actually managed to become double champions, it’s definitely a great feeling, credit to all these boys here, they really gave their all in this final,” said the 19-year-old, who plays for Young Lions in the Singapore Premier League.

Jacob, who usually plays in a more defensive role, was a constant thorn up-front for TP and was involved in both of his team’s goals.

Although NUS were able to match TP in the opening minutes of the match, a lapse in concentration at the back allowed Jacob to ghost in between their central defenders in the 17th minute.

Sean Gerard (TP #19) did well to spot Jacob’s run and sent an inch-perfect cross into the six-yard box. With no one marking him, Jacob easily powered his header at the near post to take the lead for TP.

A deep cross from the left by Akram Bin Azman (TP #22) was safely punched away by NUS custodian Gabriel Teo (NUS #18), who was under pressure from Jacob Mahler (TP #17). Jacob was then the quickest to respond to the loose ball as he quickly cushioned it towards a lurking Jordan Nicholas Vestering (TP #4).

With Gabriel out of position, Jordan, who plays professionally for Hougang United, coolly drove a low shot into the bottom right corner to double the lead. But TP was not satisfied with the two goals and continued to harass the boys in orange high up the pitch.

Against the run of play, however, NUS was awarded a controversial penalty despite the linesman initially flagging for an offside. The referee deemed that Esmond Phua (NUS #21) was brought down illegally by Danish Uwais (TP #7) in the box.

NUS’ Shamir Sebastian (#8) stepped up calmly to tucked the resulting penalty away into the bottom right corner to close the deficit to just one. While his side benefitted from that decision, NUS’ coach G Sivaraj wasn’t fully sure about the referee’s call.

“With that penalty, it became 2-1, so I’ll take (the decision) any day, any time but I thought it was a soft call,” said the 37-year-old coach with a laugh.

NUS seemed happy to enter half-time with the scoreline to try and regroup and spring an upset in the second half.

Both sides had chances early in the next half. TP’s Sean Gerard (#19) was presented with an open header just outside the six-yard box but couldn’t direct the header goalwards. Minutes later Shamir Sebastian (NUS #8) also narrowly missed a headed effort.

As both sides battled for possession, tempers flared up between Jordan Nicholas Vestering (TP #4) and a couple of NUS’ players with the former shoving and instigating his opponents. The 19-year-old defender was duly awarded a yellow by the referee.

With NUS happy to soak up the pressure and try and hit on the counter, TP was finding it a little more difficult to get into their rhythm again as their passing was becoming less incisive. Jacob Mahler (TP #17) admitted that the result could have swung to NUS favour had they converted some of their chances.

“The match was very even and we managed to edge it out,” said the TP captain.

“All respect to NUS, a very good team, they worked very hard, they were tireless, you know, they were running the whole game,” he added.

While the boys in orange did well to stifle TP in midfield, they seemed to lack the killer instinct when they do have the ball in the final third. One such instance was in the 77th minute when NUS’ Muhammad Syafiq’s (#19) cross was able to find substitute Jonathan Lim (NUS #15) in the box but he was unable to find the target with his head.

TP, on the other hand, was able to dominate possession but seemed susceptible to lapses in concentration at the back. While TP was technically more gifted, NUS seemed to be the fitter team and was running TP’s defence to the ground in the closing minutes of the match. But the boys in black were able to calmly keep possession and eventually clinched the title.

Despite the loss, NUS coach G Sivaraj said he felt his team did the best they could against a team stacked with professional players.

“I think we could have done better in our attack, but we did our best and of course Temasek Polytechnic has the quality players but as a university team and an amateur team… we have done very well,” said the coach.