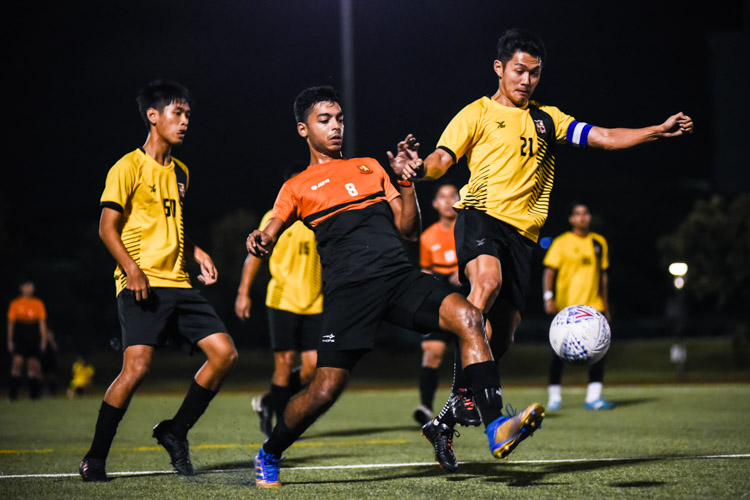 The last three IHG men’s football finals have been contested by the same two halls, with Eusoff victorious in 2018 and Sheares successfully retaining the championship they won last year.

Sheares Hall’s Muhammad Hakim (SH #11), who bagged a goal and an assist during the game, said: “Personally, I think we did very well as a team. From the onset we had a game plan and we stuck to it. Therefore, we were confident going into the game.”

Sheares, in orange and black, obtained a favourable start with the opening goal scored as early as the fifth minute. A corner taken by left-back Richard Kua (SH #17) found Hakim (SH #11) near the far post, who knocked in a clean header to put his team in control of the game.

After the first goal, Eusoff made several efforts to equalize with their best chance coming in the 22nd minute after a series of corners in their favour. Jo Kagitani (EH #47), who has been leading his team’s offense since the start of the game, fitted a through-pass from the right wing into the box, but Tan Kay Shin (EH #74) failed to finish as Sheares custodian Gabriel Teo (SH #13) was alert and quick to the ground.

Then came the highlight that was the goal which killed the game. It came from a misplaced long ball from the Eusoff defense in the 35th minute, with a Sheares counter-attack ensuing swiftly after Hakim (SH #11) managed to intercept possession and assist teammate Shamir Robinson (SH #8) who proceeded with the fatal strike. It was one of those goals, with both sets of players holding their breaths alike as the ball ricocheted off one post then the other and finally crossed over the line.

With a two-goal lead, Sheares were able to play a more paced and controlled game, with midfielder Tang Guang Yan (SH #6) falling deep to collect the ball from his defenders more often and forward long passes being reduced as a result.

Increased possession from Sheares also meant that Eusoff had fewer opportunities to seriously threaten the goal. Besides a few solo efforts from Jo (EH #47), Gabriel (SH #13) was rarely tested between his posts in the second half.

Sheares’ victory can be attributed to their organized teamplay as Hakim (SH #11) was often seen running back to help with the defense despite his attacking role. Towering centre-backs Samuel Kong (SH #5) and Kenneth Chua (SH #4) also provided good aerial defense when facing the several set-pieces from Eusoff.

Speaking post-match, Hakim (SH #11) said: “Defensively, we try to compact the game. We are playing as a team and an additional man in defense always helps.”

It was a thoroughly organised and much improved performance from the Sheares team, who took a while to get into their groove in the group stage (4-1 vs King Edward VII, 1-1 vs Temasek and 1-0 vs Raffles) before dispatching neighbours Kent Ridge Hall 7-0 in the semi-finals.

For Eusoff, an opening 12-0 rout against PGP Hall was followed by cagey encounters against Kent Ridge (1-1) in the preliminaries and Temasek (1-0) in the semis.

Despite the defeat, Eusoff showed great sportsmanship and spirit as they fought until the final whistle. When asked about his team’s performance, Eusoff captain Zhai Wen Hao (EH #3) said: “I think we played well. Two unlucky errors cost us. I just want to tell my team that they did very well, and we will come again next year.”