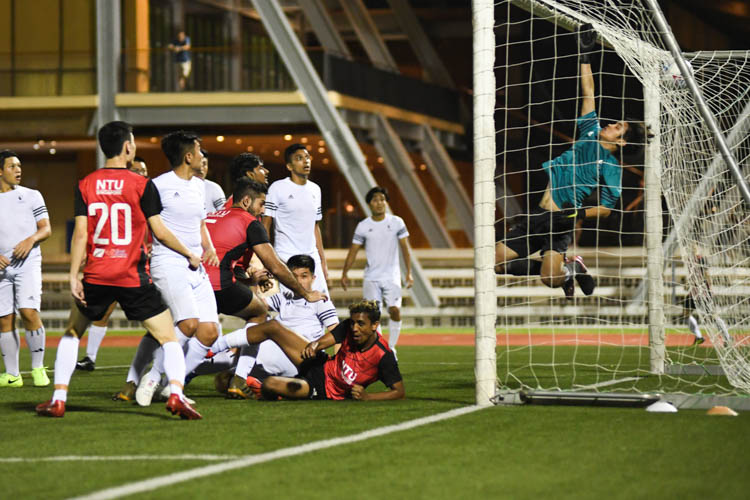 NTU put up an attacking exhibition to win 6-1 against SMU in their opening IVP Football competition. (Photo 1 © Stefanus Ian/Red Sports)

In a dramatic goal-fest, the home side had six different goalscorers and even had their goalkeeper sent off while they were 4-0 up. NTU’s Joshua Tan (#22) and Gautam Selvamany (#17) pulled the strings in midfield in a confident display with the duo being involved in almost all of NTU’s goals.

Joshua (NTU #22), who had three assists on the night, said that the boys in red were eager to put the pedal to the metal especially after going into half-time with just a slim 1-0 lead.

“I think we remembered a game in a previous tournament where we went 1-0 up and because we didn’t score more goals to secure the win, it came back to bite us,” said the 22-year-old undergraduate.

“So we needed the second and third goal to make sure we had the three points in the bag.”

And that they did, scoring a multitude of goals to start their season with a bang. The NTU side, which came in fourth in last year’s IVP competition, took the lead from the third minute.

A piercing lob from midfield was misjudged by SMU’s custodian Ragene Ng (#1) and Niels Wallace Aplin (NTU #9) had the simplest of tap ins to open his account for the home side.

NTU dominated the opening proceedings and had a big chance in the 25th minute when Joshua (NTU #22) found Timothy Chong (#99) all alone in the box but his shot was saved well by Ragene Ng (SMU #1).

SMU grew in confidence and was able to get organised defensively in the first half although they struggled to make any headway in their attack.

While SMU was sitting deep, NTU was allowed to time and space to probe their opponents’ defence with the ball. The plan for the boys in white was to soak up the pressure and use their pace on the counter against NTU, said SMU’s coach Varatharaj.

“We have some pace, now that’s our strength. We don’t have physicality, but we have the pace,” said Varatharaj, 43.

“So I was hoping to create space and then as exploit that, but yeah, that didn’t really work out because the delivery was not good enough.”

SMU started the second half brightly with Leon Sim (SMU #11) capitalising on a free kick from the right. His powerful drive forced Handchard Goh (NTU #1) to palm the ball away at full stretch for a corner. But it was not long before NTU found their groove and got going.

Breaking on the counter in the 58th minute following an SMU corner, Joshua Tan (#22) sped down the right flank and squared the ball to Gautam who had the composure to sidestep the two defenders surrounding him before slotting the ball to the bottom left corner of the goal.

NTU then added a third just after the hour mark through Naresh Singh Dillon (#5) who headed in Joshua Tan’s (NTU #22) corner from close range. The goal, however, came with a price as Naresh landed on the ground clutching his right foot and the injury would end his participation in the game. The fourth goal came on the 68th minute when Gautam (NTU #17) and Joshua Tan (NTU #22) combined quickly for a short corner which led to Timothy Chong (#99) heading the ball into the goal unchallenged.

Against the run of play, the home side’s goalkeeper Handchard Goh (NTU #1) was sent off in the 77th minute after he was deemed to have handled the ball outside the penalty box. NTU’s substitute custodian Alexander Son (NTU #13) was immediately called to action from the resulting freekick as he did well to palm away Gabriel Tay’s (SMU #6) powerful shot.

But he could do nothing about the rebound which fell kindly to Tan Yu Jing (SMU #10) who pulled one back for the visitors.

Even with 10 men, NTU refused to ease off as Faizal Raffi (NTU #10) capitalised on a miscommunication in the SMU defence. With the ball bouncing dangerously in the box, Faizal noticed the onrushing Ragene Ng (SMU #1) who came off his line and calmly chipped the goalie to extend their lead further to 5-1.

NTU then wrapped up the proceedings in the dying minutes of the match with another goal by Douglas Yeo (NTU #11). A quickly taken short corner allowed Gautam (NTU #17) to cross the ball towards Faizal Raffi (NTU #10). His header was brilliantly saved by SMU’s Ragene Ng (#1) at point-blank range but the rebound, unfortunately, fell onto Douglas’ path who tapped in for the final goal of the match.

“I think overall the NTU team had the fitness level, the intensity and aggression, which is something we need to work on,” said the SMU coach.

“We will build back our reputation after losing this game”