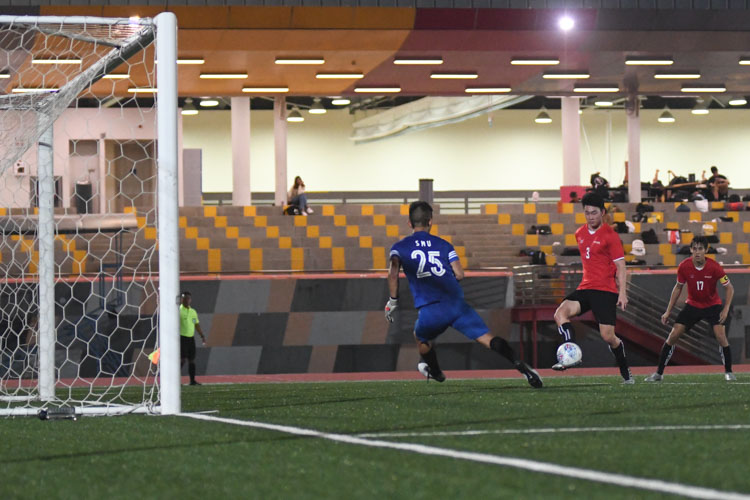 Zakri Ee (TP #3) opening the scoring with a close range tap in. Temasek Polytechnic cruised to a 5-0 win over Singapore Management University to book their place in the semi-final of the Institute-Varsity-Polytechnic football tournament. (Photo 1 © Stefanus Ian/Red Sports)

Having beaten Nanyang Technological University 2-1 in their first game, the boys in red are looking to go all the way to win the title, said their captain Jacob Mahler.

“This is my last year (in school), a few of my boys are also in their last year, we want to make sure to get the gold this year.”

The home side looked comfortable in possession throughout the match but they began the first half with a sloppy performance up front, wasting quite a few opportunities. Many of TP’s players are also plying their trade in the Singapore Premier League and signed to various football clubs. This meant that they are currently in the midst of heavy pre-season training with their clubs, said Jacob.

“You can say we were panicking a bit, you know, we had chances, but at the end of the day we know with the capability of our team, we can definitely get the result,” added Jacob, who plays for the Young Lions.

It took the boys in red about half an hour to break down the organised and patient SMU side through a short corner by Justin Hui (TP #10) and Syukri Noorhaizam (TP #11). The duo combined well with Syukri (TP #11) finding Zakri Ee (TP #3) at the far post for an easy tap in.

TP had a couple more chances in the first half that they could not convert including a penalty in the last minute of the first half. SMU would have been pleased with themselves to go into the break trailing just by one goal.

Coming out of the break, TP immediately took the initiative and scored within the first minute of the second half through Syukri Noorhaizam (TP #11) who finally got on the scoresheet with a powerful drive just inside the box following a goalmouth scramble.

From then on, it was a direct onslaught by the home side as they sent wave after wave of attacks from the wings with Nikesh Singh Sidhu (TP #8) spraying passes to both flanks.

Syukri Noorhaizam (TP #11) would be involved again in the third goal when his cross forced SMU’s Tan Yu Jing (#10) to score a bizarre own goal. As the cross came in, Yu Jing bent down low in an effort to head the ball away but he ended up deflecting the ball as it looped over his own goalkeeper to his disbelief.

“We switched our formation from a back five to a back four… that made us a lot more susceptible to crosses so there were a lot of crosses that made me have to adapt,” said the 23-year-old undergraduate. Yu Jing, who usually plays in centre midfield, said that he also had had to adapt to playing in the centre defence role due to injuries in the squad.

SMU did well to continue to stay compact in defence but their inability to keep possession meant that it was tough for them to get back into the game. Daryl Eng (SMU #25) managed to deny TP a few times with quick reaction saves but ultimately, he could not do much against an irrepressible TP side.

TP then finished the final 20 minutes of the match with another two goals by Akram Bin Azman (#22), who scored following another short corner, and George Ng (#6) who scored with a wonderful long-distance lob over the goalie.

Despite another heavy defeat, SMU’s captain Tan Yu Jing said he is proud of how hard his team played and will be looking to improve by the time the Singapore University Games come around.

“They were better than us in all aspects but we played our hearts out today and I am very proud of the boys,” said Yu Jing after the game.

“We had a lot of injuries but I know that’s not an excuse and this is a very new team as well, so we are working towards our next SUniG.”