“SUniG and IVP don’t have the same level of atmosphere” – What makes the Inter-Hall Games so special? 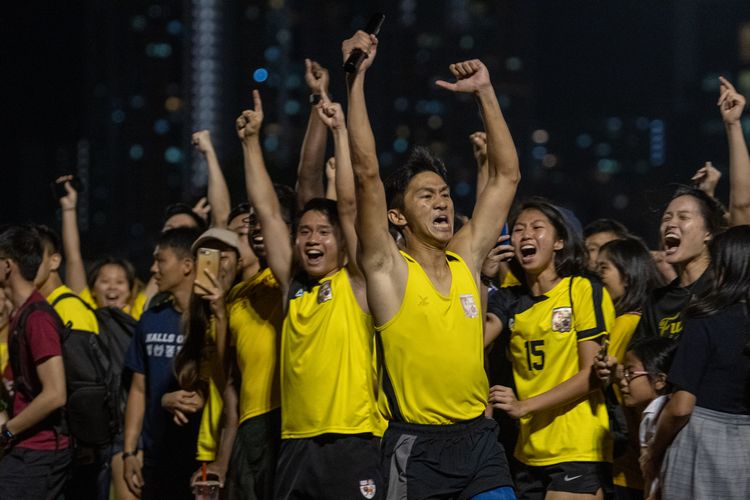 Koh Wei Shien winning the Men’s 4x400m relay for Eusoff Hall at the IHG Track finals, as his hallmates cheer him on. (Photo 1 © REDintern Jared Khoo)

It was the final leg of the National University of Singapore (NUS) Inter-Hall Games (IHG) road relay event.

Shohib Marican’s Temasek Hall teammates had given him a 25-second lead. There was no way he could give it up.

And never in doubt, the two-time A Division cross country individual champion took on the infamous “Central Library Building (CLB) slope” along the approximately 1.8-kilometre race route to anchor Temasek to gold, to thunderous approval from his hallmates who had lined up along the pavements and greeted him at the finish.

“I think IHG has a special sense of camaraderie, because you live with these people,” said Shohib, who was also part of NUS’ victorious Singapore University Games (SUniG) Road Race team this season. The 21-year-old also won the 5000m and 10000m bronze medal at the recent Institute-Varsity-Polytechnic (IVP) Track and Field Championships.

“The support I feel (at IHG) is a little greater than at SUniG and IVP,” Shohib continued. “SUniG and IVP don’t have the same level of atmosphere.”

For a student-athlete in a local university, gone indeed are the days where you had your whole school come down and cheer you on at your National Inter-School final. Sad, but true: sports finals at the annual SUniG or IVP Games will never have that kind of support.

Arguably, the atmosphere — the spectators — is part of what makes sports special.

But for students at NUS or Nanyang Technological University (NTU) who stay in Halls of Residence, such raucous spectator atmosphere and precious sporting moments are recreated every year at the Inter-Hall Games (IHG).

The NUS IHG recently concluded with the track relays on February 11, as Eusoff Hall retained bragging rights and ownership of the overall IHG championship for the third straight year.

Droves of supporters from the six competing halls flooded the fields and lined the perimeter of the track, a far cry from the atmosphere at the IVP Track and Field finals a month ago.

“IHG is one of those events throughout the year that really brings the hall closer together,” said Eusoff Hall’s junior common room committee (JCRC) president and former sports director Matthew Tjoeng. “Even when people don’t understand how a certain sport is played, many still come down to show their support.”

“To be honest, the level of competition is not the highest, especially when you compare the general skill level against IVP or even club teams,” continued Matthew, who played rugby for NUS for more than two years and is also a former captain of the Raffles Institution rugby team.

“But people are still so willing to come down to watch and support, because the people playing are their friends, and are people they’ve been quite literally living with.” 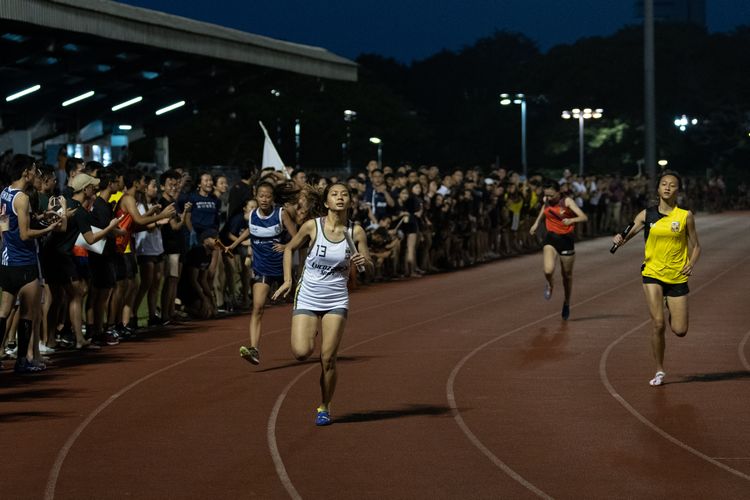 Supporters lining the perimeter of the track at the IHG Track finals, as Daphne Valmonte (in white) anchors Temasek Hall to first place in the Women’s 4x100m relay. (Photo 2 © REDintern Jared Khoo)

A platform for firsts

For many hall residents, IHG serves as a platform for them to pick up new sports and play competitively — the sole reason why some of them want to reside in a hall in the first place. They do not need to be as exceptional as athletes who make the varsity teams, but they still get to experience playing sports at a sufficiently competitive level through IHG.

“I think IHG played a big part in my university life, through which I have made long-lasting friends, followed my passion in running and hopefully influenced my juniors to do the same,” said graduated ex-Sheares Hall resident Nguyen Thu Nga, who had come down to watch her juniors compete at this year’s Road Relay and Track events.

“To be honest, I only started picking up running in JC 2, so I never thought I would have a chance to run competitively,” added the former Sheares road relay and football captain, who played at least four other sports during her undergraduate days.

“I was quite surprised to find that the hall’s sports teams were really welcoming to newbies, so I didn’t only get a chance to play, but also to lead a team in Year 2 and Year 4. I saw a lot of friends picking up sports that they never tried before — like table tennis, tchoukball, floorball — and eventually found these sports to be their new passion.”

Thu Nga, 24, also approved of the competitive level at IHG as having the right intensity, saying: “The competition is really intense, but not to the stressful level — like I’ll still see competitors joking around with each other before a race, for example. Trainings are awfully late sometimes but it adds to the fun!”

As a matter of fact, in some sports, the quality of sporting competition at IHG is comparable to that at IVP — and it is not surprising, given halls do have their share of notable sportsmen and sportswomen in their ranks: former A Division champions, varsity athletes, even national athletes. And of course, the occasional athletically-gifted foreign exchange students. 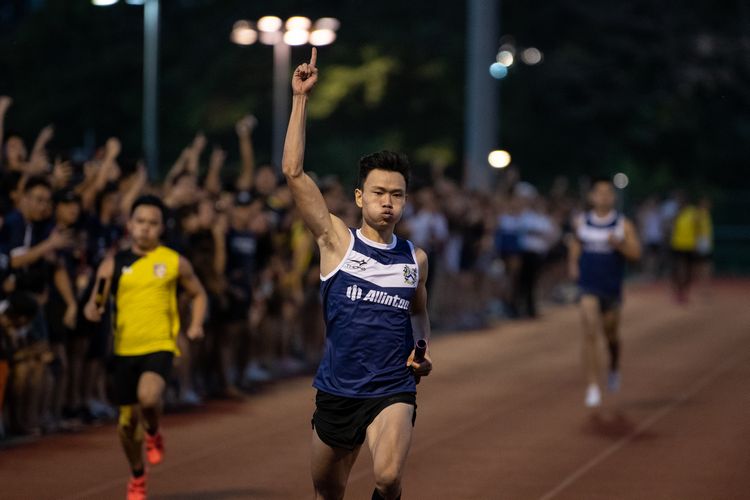 Dr. Ivan Low, a resident fellow (RF) who has stayed in Kent Ridge Hall since his undergraduate days, echoed similar sentiments about the special nature of IHG.

The instructor at the NUS Department of Physiology, who has witnessed and participated in a total of 17 IHGs, said: “During my undergraduate days, I saw it as an opportunity for athletes to represent the hall, and for the hall to support the athletes. IHG literally brings the entire hall together as one during this period — we talk sports, we eat sports, we sleep sports.”

“Today, as a resident fellow, I start to appreciate it more from the angle that it presents students the opportunities to try out new sports which they would not have otherwise been exposed to during their pre-university days,” he continued.

“Yet, it still carries the level of competitiveness that could attract and keep the competitive athletes excited. Such is the beauty of IHG.” 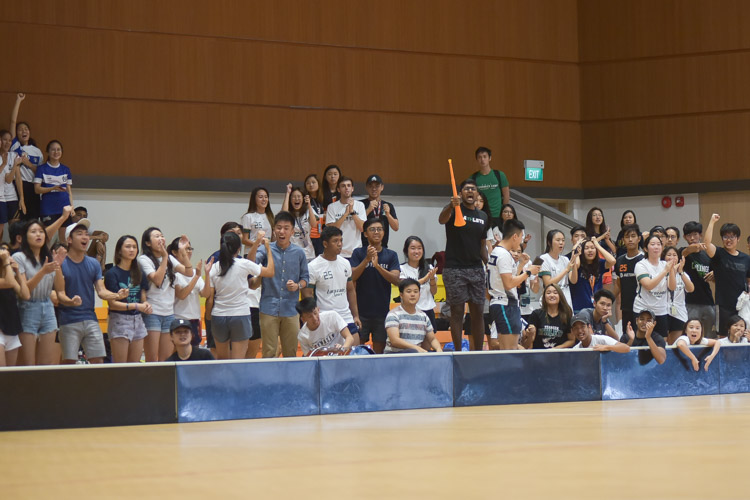 But the IHG is more than just fun and games, it is serious business. Halls actually hire professional coaches for most of their sports teams, as well as procure new sporting equipment every year — Eusoff Hall even procures spike shoes for their track athletes.

According to a hall’s JCRC president, who prefers not to be named, their annual budget spent on coaching fees and sports procurement alone easily reaches five figures.

Sponsors are flashed across most halls’ IHG jerseys, and each hall’s sports management committee spends sizeable amounts to provide welfare for their athletes — such as five months’ supply of 100-Plus isotonic drinks, bags of ice to prepare ice baths for recovery, and renting a van to transport athletes and supporters to and from matches.

Hall sports teams training up to four to five times a week are not uncommon — Sheares Hall’s victorious football boys even held training sessions at 7am on Saturdays and on the second day of Chinese New Year to avoid field usage conflict.

While all halls compete to use the campus sports facilities, varsity teams are still prioritised by the school in terms of venue bookings — which led to some IHG events being pushed back several times.

And with caps imposed on the number of varsity players in each hall team, many athletes forgo the chance to represent NUS at SUniG or IVP — even though they are good enough — just so they can compete at the IHG.

“I see competition as a form of motivation that encourages not only the athletes to train harder, but also as a form of driver for the general supporters to be engaged in sporting activities by which their peers are doing well in. Of course, the degree of competitiveness has to be moderated at a healthy level; it should never be encouraged beyond the point that sporting behaviours and sportsmanship are compromised.” 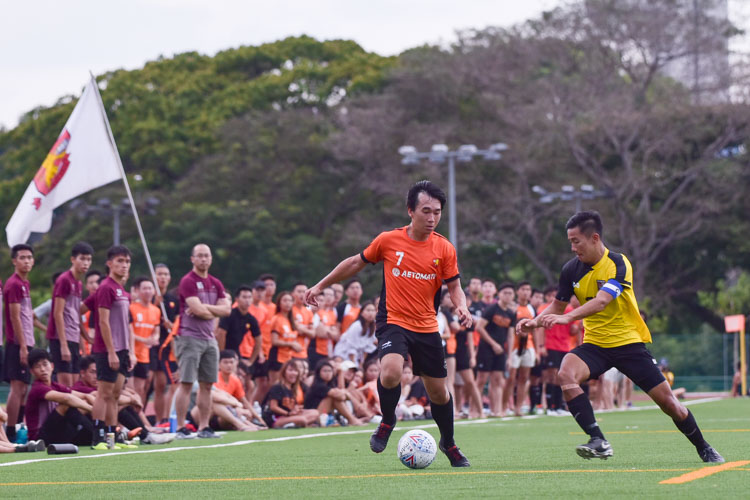 Supporters come with flags and drums to cheer on their team at the IHG Men’s Football final between Sheares Hall and Eusoff Hall. (Photo 5 © Iman Hashim/Red Sports)

In fact the competition between halls starts way before IHG season — it begins annually before the academic year with the recruitment of new freshmen into their respective halls.

And competitiveness is an understatement, with most halls vigorously filtering their annual freshmen intake based on applicants’ achievements in their co-curricular activities (CCAs).

To ease the process, the halls’ sports directors and sports captains already look out for the top A Division athletes matriculating into NUS each year and “poach” them — for lack of a better word — by contacting and guaranting them a spot in the hall, for instance.

Somewhat, this competition is akin to the direct school admission (DSA) exercise in secondary schools and junior colleges.

Temasek Hall’s Shohib Marican can attest to this.

“A few seniors from various halls were asking me on Facebook on where I wanted to go,” said the four-time A Division track champion in the long distance events, who attracted interest from at least three halls.

“I felt it was okay, similar to how DSA works, but yeah I don’t really have much of an opinion about it.”

And with residents of a hall vying to stay beyond freshman year through the accumulation of “involvement points”, the top athletes in each hall usually have an option to do so via the “Master’s List” — which looks at their sporting aptitude and contributions to earn another year’s stay even without racking up enough points.

“For a hall to be successful, there must be continuity,” said Eusoff’s JCRC president Matthew Tjoeng. “Eusoff Hall prides itself on being an all-rounded hall.”

“So incoming residents are filtered not just based on sporting ability, but on talent in many different areas, such as culture, media, and previous leadership roles. Our current leaders will look for their juniors who they believe have the ability to bring our hall to greater heights, but that’s really about it.” 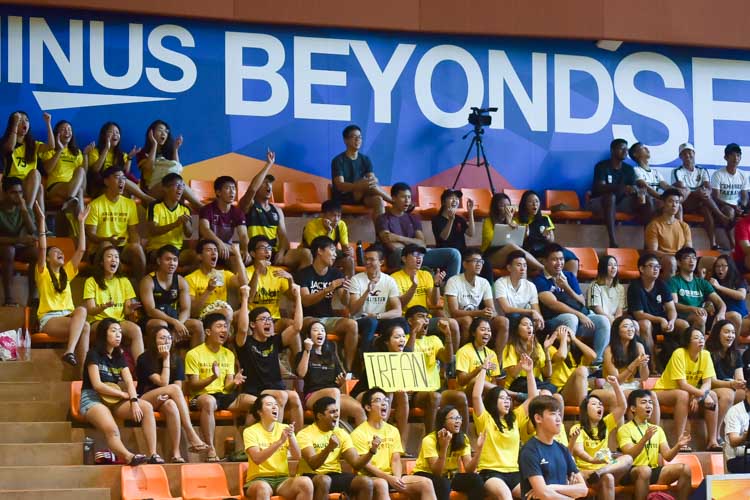 A matter of pride

At the end of the day, there is no prize money, there is no tangible reward apart from medals and trophies. Then why is there so much competition and pride at stake?

According to Matthew, the goal is to bring the hall community together as one.

He said: “IHG brings the hall together. Winning titles, coming together to watch our athletes play, is one thing that we can share as a hall. It’s not often you see different groups from all of hall, despite not always understanding the sport or event, come together to support each other.”

Perhaps, it is because halls are where close-knit communities are bred — the residents pretty much live together, eat together, study together, play together, and have late night chats together.

And hence they have a strong sense of community, sense of belonging, and it is a sense of pride that probably no one can attest to unless you have been part of it all yourself.

It is a sense of belonging much greater than any undergraduate has felt towards their own university at SUniG or IVP competitions, because when they play for their hall they are playing — quite literally — for their home.

And this is what makes the IHG special. 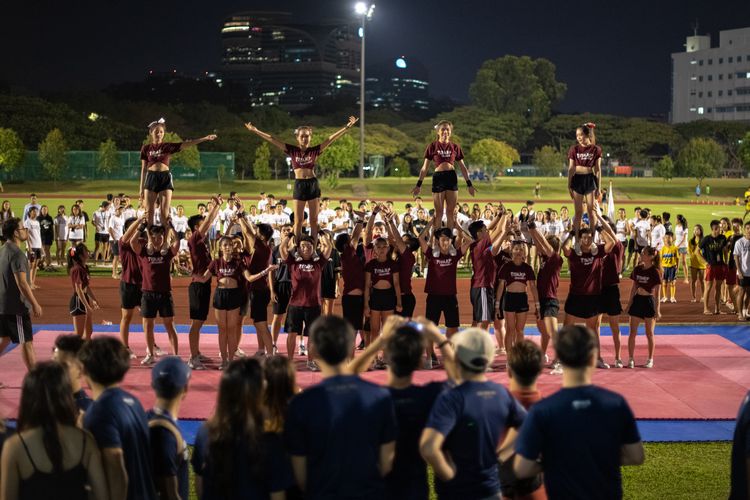