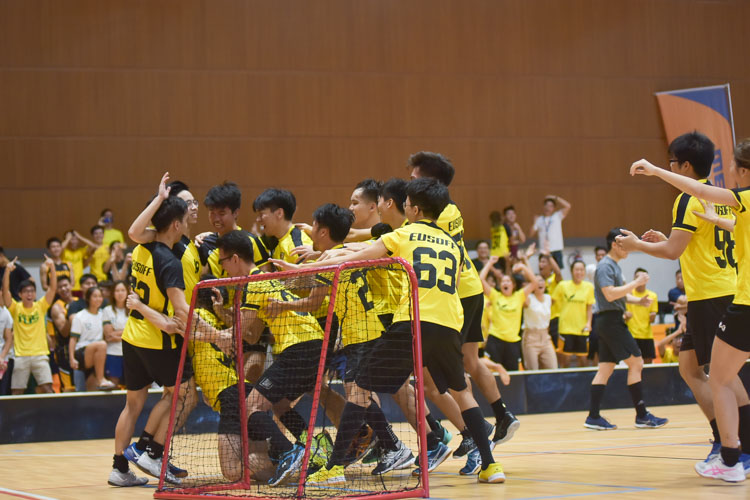 The Eusoff team celebrates after the penalty shootout victory. In a rollercoaster of a match, defending champions Temasek fought from 0-4 down to 4-4 before Eusoff had the final say on sudden death penalties. (Photo 1 © Iman Hashim/Red Sports)

NUS University Sports Centre, Sunday, February 10, 2019 — Eusoff Hall (EH) emerged victorious over Temasek Hall (TH) in a dramatic sudden death penalty shootout in the National University of Singapore (NUS) Inter-Hall Games (IHG) floorball final. The rollercoaster of a match saw defending champions TH fighting back to 4-4 in regulation time despite being down 0-4 in the second period.

The pace of the match started off very evenly at the beginning of the first period, with both teams duelling to gain more possession of the ball. It was not long before EH started to gain dominance of the game, with a powerful shot that hit the board in the fourth minute of play.

Despite EH getting the first two-minute sin-bin of the game, TH failed to capitalise on the power play in order to gain an upper hand, leaving Jaypy Pillay (EH #48) to take the opportunity and score the opening goal in the eighth minute. His wrist shot from the halfway line was unstoppable, landing in the top left corner of the net.

The second goal for EH came not long after, with a cool finish under the keeper by Tung Hao Yuan (EH #71). At this point of the game, TH were struggling to keep up with EH’s quick pace, unable to recover from their defensive mistakes and barely hanging on to the game. In an attempt to push forward, TH lobbed multiple balls over the EH defense but to no avail.

With just five minutes left on the clock in the first period, EH showed their dominance yet again when Jerrell Lee (EH #56) capitalised on a defensive snafu by TH. With the goal left wide open for him, he calmly slotted the ball into the net, to loud cheers and applause from the Eusoff supporters.

Halfway through the second period, Tay Yang (TH #10) almost scored the first goal for his team in a 1v1 with EH keeper Ardy Shaqeal Jefree (EH #90). Despite TH’s valiant efforts to get their first goal of the match, the EH defense was quick to cover, preventing any goal-scoring chances for TH.

With the score at 3-0 to EH at the end of the first period, TH entered the second half with more grit and determination to try and stay in contention for the title.

With a free-hit right in front of the goal one minute into playing time, it seemed the perfect goal-scoring opportunity had been presented. Unfortunately, the ball swerved marginally wide of the goal.

EH almost scored again in the fourth minute of gameplay, the ball rolling an agonising mere centimetres from the post. While TH entered the second period with better gameplay, this did not prevent EH from scoring their fourth goal of the game.

One minute later, Lloyd Teo (EH #44) capitalised on a loose ball from a rebound to score into the top left corner of the net.

“On paper we’re the underdog team so when we were 4-0 up we were quite shocked,” commented EH team captain Terry Tay (EH #61). “We aren’t used to holding possession but rather to fight for the ball. Our team tactic was actually to keep the possession and not to let them score. We were quite surprised but at the same time excited.”

With the score at 4-0 in EH’s favour, this seemed like a clear-cut win. But not quite.

TH still held their composure and proved their desire to stay in the running for the championship with a goal from team captain Tay Yang (TH #10). With a deft wrist shot, he neatly tucked the ball under the ‘keeper to score his side’s first goal of the match.

While it seemed the end of the second period would end rather uneventfully as both sides were evenly matched, TH were awarded a last minute penalty with 30 seconds left on the clock.

Tay Yang (TH #10) stepped up to the occasion, tricking the ‘keeper with a piece of skillful stickwork to slot it into the bottom right.

At the end of the second period, the score stood at 4-2.

With 20 minutes and two goals to score to equalise, TH entered the third half a new team, attacking more and holding their defense much better.

A mere two minutes into the period, Tan Yuan Rong (TH #9) scored his team’s third goal out of nowhere with a spectacular effort. Collecting a rebound, he sent a backhanded slapshot past the EH keeper who stood no chance of saving it.

Afraid of losing their lead, EH started to go into defensive mode, allowing TH more space to play the ball.

This decision ultimately led to TH scoring the crucial equaliser when Lim You Xuan (TH #20) demonstrated a good piece of skill against EH keeper Ardy (#90), sending his wrist shot bottom left of the net. The Temasek supporters were brought to their feet.

Despite the high tension involved in the game, the players still managed to show good sportsmanship. EH player Jaypy Pillay (EH #48) helped opponent Silas Choe (TH #11) stretch out when the latter fell down cramping with six minutes left on the clock.

TH almost had the opportunity for their comeback win when Tay Yang (TH #10) sent a powerful shot towards goal which swerved just wide to the left of the net, drawing groans and gasps from supporters of both teams.

Despite TH’s best attempt to win back the game in its dying moments, their amazing comeback at least kept their shot at winning alive through the penalty shootout.

On his team’s comeback, TH captain Tay Yang (TH #10) said: “We just knew that we had one job to do which was to come back. We knew we had the capability to do so.”

The penalties for both teams started off on a rocky note, as the first two penalty takers on each side missed the mark.

Tay Yang (TH #10) scored his team’s first penalty in the shootout with a deft flick into the top right corner of the net. Not willing to be beaten just yet, EH responded, with Joshua Chin (EH #19) scoring in similar fashion.

Tension mounted when Kenny Goh (TH #7) had his attempt blocked by Ardy (EH #10) yet again. Then, EH’s confidence rose when Ong Jia Jie (EH #76) placed the ball into the roof of the net, leaving Chester (TH #1) with no chance of saving it.

Despite the pressure, You Xuan (TH #20) stepped up for his team’s fifth penalty and calmly put the ball into goal, slotting it under the EH keeper to keep his team’s hopes alive. Then, EH captain Terry (#61) botched his penalty — in what would have ensured a win — sending both teams into sudden death with only two out of five penalties scored apiece.

The entire sports hall dropped into silence as Tay Yang (TH #10) stepped up to take his penalty — his third in the game and second in the shootout. His shot missed the mark, drawing groans from Temasek supporters while the Eusoff crowd started cheering loudly.

Once again, Joshua (EH #19) stepped up to take his second penalty, sending it top left of the net. Sealing the victory for his team, Joshua promptly dropped his stick and saluted the Eusoff crowd to thunderous applause.

“Joshua Chin is absolutely brilliant — I have absolute faith in him so I didn’t think at all about him not scoring. I felt that we had won already even before he stepped onto the court,” said EH captain Terry (EH #61).

Despite losing on penalties, Tay Yang (TH #10) had nothing but good things to say about his team: “I think we really improved throughout the season and I think we really displayed very good mental strength to come back to 4-4 from being down 4-0.”

Similarly, Terry (EH #61) commended his team on a job well done: “We have come a long way since semester one and we have trained quite hard since the early days. I would say that I’m really proud of them and I hope they can bring this fight in them throughout their lives because it was really hard for us to win this final after so many years.”