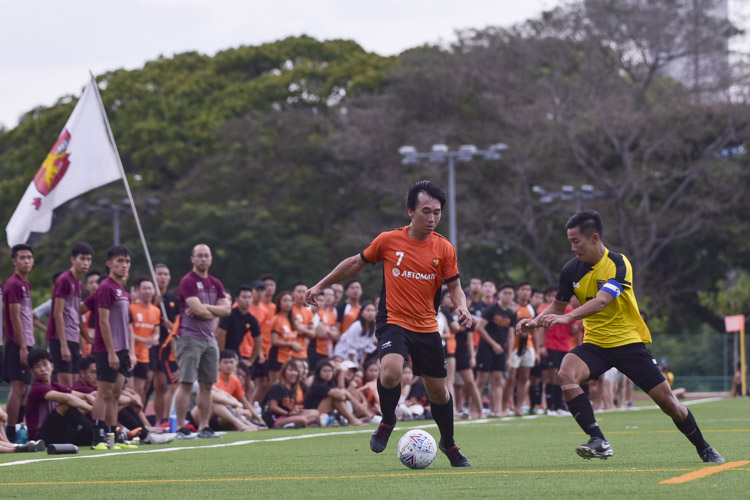 It was a rematch of last year’s final, as Sheares managed to seal redemption after losing to the same opponents 12 months ago.

After gritting it out 2-2 past extra time, the stage was set for a nail-biting penalty shootout. Goalkeepers Chua Cheng Tat (EH #47) and Bryan Quek (SH #81) set out to secure the win for their sides.

Eusoff’s first penalty taker Muhammad Hyrie Alias (EH #9) — who had scored his team’s opening goal in the match — stepped up to the spot.

But to his dismay, his penalty sailed over the crossbar, cueing cheers from the Sheares supporters.

It would then, however, be the Eusoff faithful’s turn to rejoice when similarly, Sheares’ first penalty taker Richard Kua (SH #17) missed the mark as Cheng Tat (EH #47) punched his shot away.

After three penalties apiece, it was time for sudden death.

The turning point came when Koh Wei Shien (EH #13) failed to convert his penalty — his effort flying over the crossbar. Knowing this was their chance at clinching the title, Alexander Chow (SH #5) calmly stepped up and tucked the ball into the bottom right of the net.

It sparked wild celebrations from the Sheares supporters, with some running onto the field. They thought they had won — but not quite. Celebrations continued for at least the next 20 minutes or so, with the Sheares players having already posed for pictures with their friends who came to support.

But this was cut short due to a Eusoff dispute, contesting that the penalty shootout should have been played out of five spot-kicks apiece — as per universal rules and regulations — instead of the three as dictated by the referee.

Sheares and the convening committee conceded and agreed to continue the penalties from where they left off, allowing Eusoff to take their fifth penalty.

“I can understand where they are coming from — it is stated in the rules that it is a five-kick penalty (shootout). In the end someone has to give in, we agreed that it was fair to continue from where we left off instead of starting from the beginning,” said Sheares captain Bervyn Goh (SH #8).

In rather anti-climatic fashion, Eusoff’s fifth spot-kick taker Arun S/O Ganasarajah (EH #35) saw his attempt bounce off the crossbar, sealing the victory for Sheares and leaving defending champions Eusoff to settle for runners-up.

“I think we put up a very good fight, both teams were quite even and it ended up boiling down to just penalties, so at the end of the day they won, but we weren’t exactly the lousier team,” commented Eusoff captain Amos Cheah (EH #31) after the game.

At the beginning of the first half, Eusoff maintained more possession of the ball, resulting in an early goal in the 14th minute when Hyrie (EH #9) tapped in an easy goal from close range into the bottom left corner due to a lapse in positioning on Sheares goalkeeper Bryan’s (SH #81) end.

With ample time on the clock, Sheares fired back with the equaliser four minutes later after a good piece of skill inside the penalty box allowed Hakim (SH #18) to slot the ball past Eusoff goalkeeper Cheng Tat (#47).

Not willing to concede defeat just yet, Eusoff stunned the crowd when vice-captain Zhai Wen Hao (EH #92) passed the ball to Gautham Rajadanran (EH #77) who blasted a shot into the top right corner of the goal from outside the box.

While the second half started off quite evenly, there began to be more action in the Eusoff half with Sheares having greater possession and attempts at goal as they sought to tie the scores.

In the 69th minute, Sheares managed to get the ball into the net via Jonathan Lim (SH #10), but the effort was eventually disallowed for offside.

The opportunity for Sheares soon arose just five minutes before the end of regulation time, when substitute Bleston Low (SH #66) capitalised on a scramble in the six-yard box following a free-kick from Dominique Teo (SH #2) to even out the score at 2-2.

Sheares had the opportunity to clinch the comeback win with the very last kick of the game, but Hakim’s (SH #18) strike from a tight angle agonisingly rebounded off the right post.

With a draw after 80 minutes of playing time, the two teams headed for 20 minutes of extra time, with each half standing at 10 minutes with no break, heightening the pressure and difficulty of winning.

Sheares almost managed to win the game during extra time, if not for a fingertip save by Eusoff ‘keeper Cheng Tat (EH #47) that kept his team’s hopes alive before the penalty shootout.

On their victory, Sheares captain Bervyn (SH #8) said: “I think we tried to stick to what we know and to play to our system. From the first half you could tell that we were having quite a decent game and we were playing pretty well so there wasn’t really a reason to drastically change tactics but to trust in the team and that what we were training for will pull us through.”

“Today a lot of the players showed their fighting spirit and that they really wanted it so I have to give it to them.”

Despite losing their title, Eusoff captain Amos (EH #31) said of his team: “We knew that it was a long second half for us to fight through and hold the game, unfortunately there was a lapse of concentration in the last 10 minutes, and we ended up conceding a goal. However I think the guys did a very good job, everyone fought with heart and never gave up until the very last minute.”