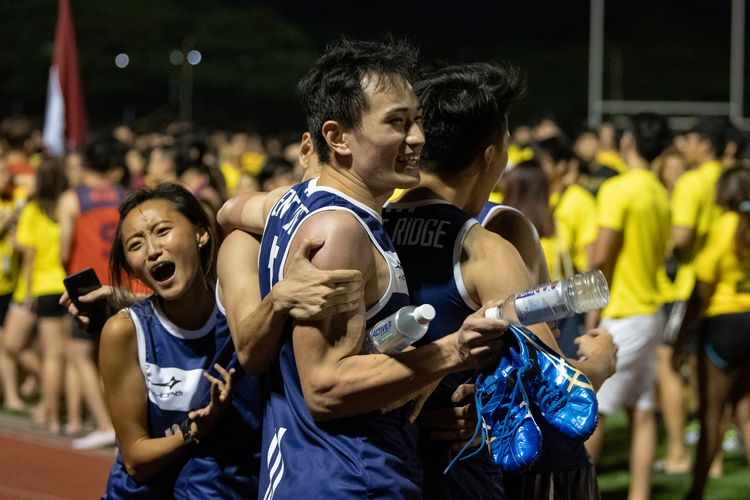 The Kent Ridge Hall team celebrating after the mixed medley. Their win in that event helped them pip Eusoff Hall by one point to clinch the Men’s IHG Track title for the third straight year. (Photo 1 © REDintern Jared Khoo)

Six, five and four points were awarded to the first, second and third placed teams in each relay event respectively and so forth, with sixth place earning one point while disqualifications warrant none.

Kent Ridge Hall (KR) pipped Eusoff Hall (EH) by a singular point to retain the Men’s Track title for the third year running, while Temasek Hall (TH) clinched their first Women’s title in recent years after edging out 2016 and 2017 winners KR by two points, with defending champions Eusoff another one point behind in third.

KR drew first blood in the opening event, emerging as clear victors in the Men’s 4 by 100 metres relay. The quartet of Ng Wei Ming, Lee Hong Yi, Clement Chan and Chan Zhe Ying — all seasoned athletes with competitive experience at the Institute-Varsity-Polytechnic (IVP) Championships under their belt — stopped the clock in a hand-timed 43.84 seconds.

Temasek, King Edward VII and Sheares — who finished the race in third, fifth and sixth respectively — were all disqualified for botched baton handovers in the second exchange zone.

The Women’s 4x100m race was a slightly closer fight, with Temasek pulling away only in the final 100 metres.

Similarly in the Women’s 4x400m relay, Sheares and KR appeared to be the favourites until Audrey Sarah Tan of Temasek surged from third to first place on the third leg.

Sheares’ first two runners Sarah Ting and Karine Leo had given them an early lead, with KR’s Charis Chan and Vanessa Lee following a close second.

Handing off to anchor Alexandra Louise Wee, TH’s Audrey had established a lead of about 20 metres ahead of Sheares’ and KR’s third runners — basketballers Kristerbel Pang and Lee Xin Ru respectively — despite being about an equal distance behind when she started her run.

Even as Alexandra successfully held the lead until the finish for Temasek’s second win, she had her initial worries about KR and Sheares catching up.

“I went all-out as I did not know where the second team was, so I was just fighting hard to make sure nothing bad happened,” Alexandra said. “Audrey did a good job of bringing us into the lead so I definitely did not want to give it up.”

KR and Sheares had gained the early lead once again via first runners Clement Chan and Lai Shu Wei respectively, with Temasek close behind. Eusoff’s Raymond Scott Lee — the 2018 IVP 400m champion — then turned on the heat on the second leg, going from fourth to first.

Eusoff’s Joel Ng and KR’s Ben Ong continued neck-and-neck up until the end of the third leg, with anchors Koh Wei Shien of EH and Chan Zhe Ying of KR even getting their legs tangled and almost tripping each other after receiving the baton.

“Zhe Ying’s an IVP runner, but he also ran the 4x100m earlier, so I took a gamble and waited till the last stretch in the hopes that he would run out of energy,” Wei Shien said. “Luckily the plan worked. I’m grateful for my teammates as well; most of our runners are not experienced sprinters, and they still went out of their comfort zones to run a phenomenal race.”

The battle for third place was also a tight one, with Russell Kam of Sheares overtaking Temasek’s Mitchell Teh.

With KR getting one better over Eusoff in the 4x100m and Eusoff edging out KR in the 4x400m, it would come down to the mixed medley event to decide the Men’s track champions.

Eusoff gained the early upper hand via Chua Cheng Tat on the 200m leg, but by the women’s 800m leg, the tables were turned.

Fresh from her 4x400m run, Vanessa Lee — this year’s IVP 800m, 1500m and 5000m champion and second-fastest Singaporean woman in the 3000m Steeplechase — overtook Eusoff’s Tan Hui Xin by the first lap and helped Kent Ridge establish a gap so dominant that even 2018 IVP 800m-1500m champion Zachary Ryan Devaraj of Eusoff was unable to close.

She clocked a split of approximately 2 minutes 27 seconds for the two laps, handing over the baton to teammate Goh Kwee Yong for the men’s 800m leg with a lead of over 50 metres.

Zachary managed to close the gap to 30 metres after the first lap, but was unable to chase down Kwee Yong, who secured the win for KR in 6:41.48 against Eusoff’s 6:42.06.

Behind, TH’s Alexandra — also doubling back from the 4x400m — passed the baton to IVP 5000m-10000m bronze medallist and four-time A Division Boys’ track champion Shohib Marican, who opened the gap further to secure a safe third-placing for Temasek.

“Honestly I just gave it my all — Zachary’s a great runner but I tried not to let that affect me,” explained Kwee Yong, who plays floorball for NUS. “I just focused on running my own race. The results are a pleasant surprise — if the race lasted for another 100m I would have likely lost the lead.”

The Track relays concluded the 2019 IHG, with Temasek winning the overall IHG Women’s championship and Eusoff both the Men’s and Overall championships.

Note: All timings were hand-timed.