Joshua Evans of Temasek Hall running the second leg of the men’s race. His split of 5:38 — the fastest clocked by an individual that evening — helped Temasek open up a huge lead which they maintained to clinch their first men’s road relay title in at least eight years. (Photo 1 © REDintern Young Tan)

National University of Singapore, Tuesday, January 22, 2019 — In the second week of the annual Inter-Hall Games (IHG), the six halls of the National University of Singapore (NUS) — Eusoff, Kent Ridge, King Edward VII, Raffles, Sheares and Temasek — fielded their six best runners per gender for the Road Relay event, with each runner completing an approximately 1,800-metre route within the NUS campus.

Temasek were aided by Joshua Evans and Shohib Marican, who were fourth and third respectively in the 5000m event of the recently-concluded Institute-Varsity-Polytechnic (IVP) Track and Field Championships.

However, it was King Edward VII Hall that were leading in the first leg, with Temasek close behind and defending champions Eusoff in third.

Temasek soon seized the initiative with Joshua, running the second leg, gaining a lead of over half a minute. His timing of 5 minutes and 38 seconds was the fastest timing clocked at this year’s Games.

“It was our captain’s idea to run two strong legs up front, and have Shohib as ‘insurance’ at the back,” explained Joshua.

Meanwhile, Eusoff had moved up to second place, ahead of King Edward VII and Raffles.

Temasek held on to their lead for the rest of the race, and by the start of the final leg, the results for the top two positions appeared to be a foregone conclusion. Handing off to their anchor Shohib Marican, Temasek had a lead of about 25 seconds.

The gap proved insurmountable even for Eusoff’s Zachary Ryan Devaraj, whose timing of 5:44 was only marginally faster than Shohib’s 5:48. Temasek clocked an overall timing of 36:10, while Eusoff clocked 36:33.

The fight for third place, however, was much tighter. Raffles Hall led King Edward VII by seven seconds, while Sheares Hall were another two seconds behind.

Aided by Jonathan Qhek — covering his leg in 5:47, the third fastest individual of the Games — Raffles pulled away to finish third in 38:07.

Temasek’s victory ends its drought of IHG Road Relay victories of at least seven years. Eusoff had won the Men’s race last year, while Kent Ridge dominated for six straight years from 2012 to 2017.

Joshua and Shohib were quick to point out that their Hall’s victory was a team effort.

“It was a great performance from Temasek Hall. I think we all put in our best effort. This would not have been possible without the support of our team manager and captains who organised trainings since last year and always emphasised fun and safety,” Shohib said.

“Temasek Hall supporters were great out there, so it was a really fun racing experience,” added Joshua.

While Temasek managed to turn the tables on Eusoff, the latter maintained their dominance in the Women’s race by defending their title with an overall timing of 45:29, almost 100 seconds ahead of runners-up Kent Ridge.

While this brought Kent Ridge from fourth to second place, Eusoff still proved too strong. Five out of Eusoff’s six runners covered their leg in under eight minutes, allowing them to lead from start to finish.

In the fight for third place, Temasek’s anchor Alexandra Wee — the 2016 National Schools Track and Field Championships A Division girls’ 800m champion — pulled her team from fifth to fourth, but fell three seconds short of catching up to Raffles Hall’s Melanie Hui.

Raffles and Temasek clocked overall timings of 48:11 and 48:14, respectively. 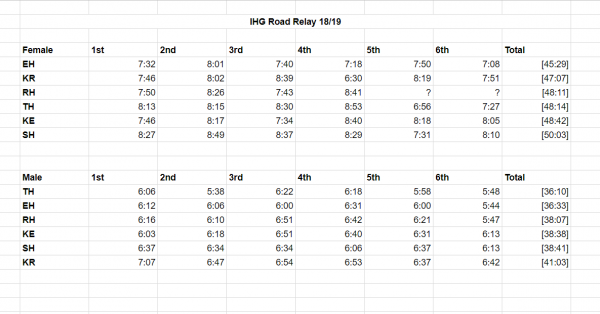