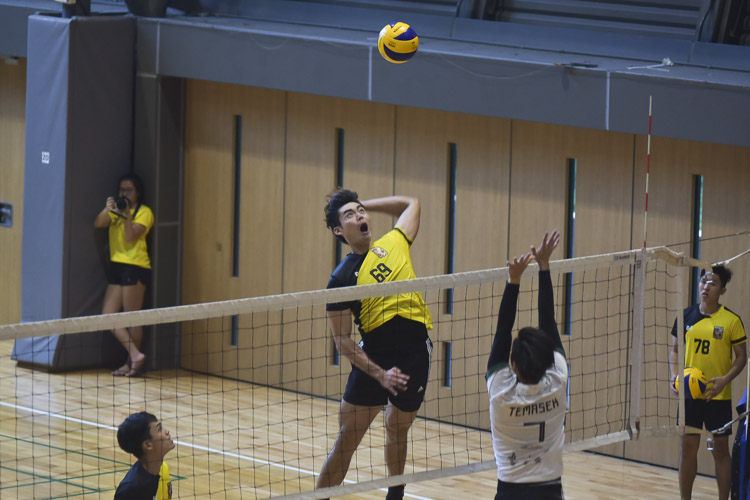 The win served as redemption for Eusoff, who had lost to Kent Ridge Hall in last year’s final.

The first set was a tight contest between both teams. Eusoff set out the pace with a 3-0 lead coming off blocks and spikes, whilst Temasek got their first point as the referee called a ball handling error on Eusoff’s end.

Soo Peng Ru (TH #11) followed up with a dink that caught Eusoff off-guard and scored a point. Both teams were neck-and-neck taking turns with the lead until a TH spike that was called out-of-bounds after some contemplation from the officials, giving EH the lead which they built momentum on.

With their communication on court, Eusoff managed to pull ahead 19-13 before TH called a time-out. This time-out would become crucial as it allowed TH to mount a comeback and build their tempo whilst playing from behind.

They managed to close the gap and tie the score at 23-23 before Eusoff called for a time-out. Although a strong Eusoff spike went out-of-bounds to give TH the upper hand, they were unwilling to back down and fired another spike to tie the game at 24-24, bringing it to deuce.

At this precarious scoreline, it was TH that managed to pull through and secured the set by winning 26-24.

The second set saw a similar affair in the scoreline as both teams hustled hard to gain the upper hand. It was anyone’s game up to 11-11, before a stoic Eusoff defense pulled off several back-to-back blocks against TH’s spike balls to give them the lead at 15-12.

Eusoff pulled further ahead and took the set with a 25-18 win, capitalising on powerful strikes from national beach volleyball player Mark Shen (EH #69) as well as mistakes on TH’s services.

Temasek momentarily held a lead of 3-0 at the start of the third set as a result of Eusoff’s missed spikes and blocks, however Eusoff eventually caught up coming off Mark’s (EH #69) vicious spikes.

Eusoff continued their scoring momentum and led 7-3 before a TH time-out. Eusoff carried on with their rhythm and their good coordination on court allowed them to stretch their lead further to 23-16 before another time-out was called.

They eventually secured their second set with a convincing 25-17 win, putting them one set away from the championship.

Determined to clinch the victory, Eusoff started the fourth set strong to gain a steady lead. They did not allow space for TH to come close, and Mark’s (EH #69) spikes proved too much to handle for TH as he secured a significant number of points.

As Eusoff pushed towards their victory, TH managed to stay in the game with a few misfires from Eusoff that went out-of-bounds, as well as a few dinks and spikes of their own.

A great service by Tan Wen Xiang (EH #4) scored and brought Eusoff closer to victory at 21-14 before TH called a time-out. Both teams scored evenly back-to-back after the time-out, allowing Eusoff to take down the final set at 25-18 and claiming the title with three sets to one.

On the loss, Temasek captain Gareth Lai (TH #12) commented briefly: “It was a good fight, I think we played our best.”

When commended on his performance, Mark Shen (EH #69) humbly replied: “It was more than me, it’s everyone. The team really gave their all, put in hard work and did well. We managed to stay composed despite conceding the first set and hence earned the victory.”