“When you ask children why they quit sports, two things come up: too driven by adults, and pressure to do well” — Sergio Lara-Bercial 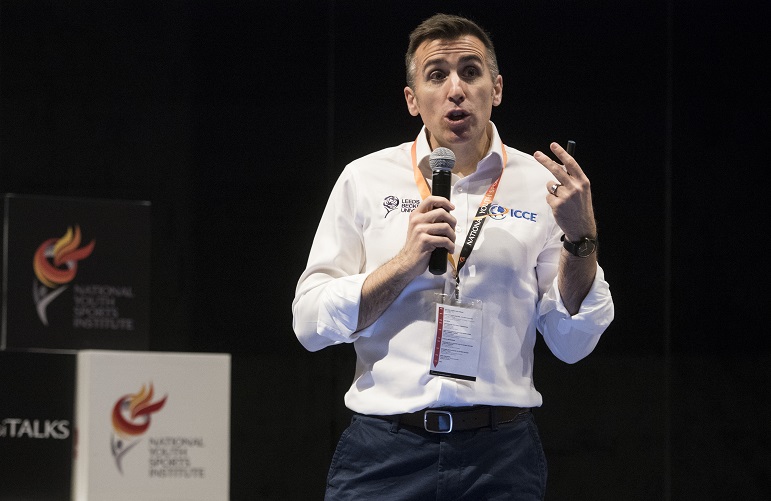 Park Avenue Convention Centre, Friday, February 2, 2018 — Acting Minister for Education (Schools) Ng Chee Meng announced on January 24 at the opening ceremony of the National School Games that all of the 21 Junior Division sports competitions for primary schools will be reviewed. The aim is to provide more tiered competitions to give more student-athletes a chance to compete.

Sergio Lara-Bercial, a visiting speaker at the National Youth Sports Institute (NYSI) Youth Coaching Conference, gave his views on the review on the sidelines of the conference.

Red Sports: What is your view on competition for youth athletes?
Lara-Bercial: There is nothing wrong with competition, but competition has to be suitable for the right age and stage of development of the participants. If you go back to the etymology of the word competition, it is not about winning, but about doing your best. Competing means ‘strive for your best’. I am not saying that children shouldn’t compete. For young children, emphasis should be, whenever they are playing, learning to compete, learning to do their best.

At a young age, is there a need to keep league tables? Is there a need to have top scorers? I don’t think there is. Children, we know this from research, they don’t care about that. They only care about that because the parents and the coaches, the message they get from them is, ‘Oh, this is important’, so I have to care about this. But when they are playing, they don’t care. When you do research and you ask them, ‘Why do they like sport?’, winning doesn’t come into the picture.

So early on, outright competition, I don’t think really helps. I am not saying that we get rid of competitions altogether. I think children should be allowed to go to festivals and have games and learn to compete, but the problem with competition is that once all you value is winning, that conditions so much of everything that happen.

So coaches just want to win, so they will do anything to win, and we know they will do things that are not developmental. So they will take short cuts to win, as opposed to doing what the children need at that point to be the best they can be 10 years later. It really conditions what you do. So I think it is a big issue.

Red Sports: Do children aged 6-12 have the capacity to handle sporting pressure when it comes to winning and losing?
Lara-Bercial: No. From a psycho-social point of view, we know when you ask children why they quit sports, why they stop playing, two things come up: it becomes too adult-like, too driven by the adults, and because of the pressure of having to do well.

So early on, children are not psycho-socially ready to face full on competition. They like competing, but if that becomes the emphasis for everything, we know it takes away from their motivation quite substantially.

Red Sports: If you move away from competition to just participation, would that take away the incentive to win?
Will kids become soft?
Lara-Bercial: That’s a misconception that taking away competition, kids are going to be soft. Kids naturally compete and they like competing and they like doing their best. I don’t think just because we stop having a league winner, the kids are going to be less competitive.

To be completely blunt here, you wait until those kids go through puberty, and hormones come in, and they will be very competitive. As we go into adulthood, you become competitive. But there is no reason to force that upon them before that.

In countries like Belgium, in football, up to under 11, they have eliminated competitions. The kids just go to festivals every weekend. Even when they go to these festivals, they don’t even play with their own teammates. They mix the teams and then they play the games. Belgium football is doing really well with this system and they are producing a lot of talent because they are not losing anybody. All their kids want to keep playing.

So I don’t think it will make kids soft. I think we have to help children to compete but the winning and the losing and the league tables are secondary at that age. But it is a difficult path because parents are used to it, coaches are used to it.

From what I heard, school principals (in Singapore) really value winning at that age. That’s a problem. Then coaches have got their backs against the wall cos even if their philosophy is not around winning but is more about development, they are asking them to win, because that’s the only way to keep your job, or be valued, or be recognised.

Red Sports: So at which age group can we start talking about winning?
Lara-Bercial: From 12, 13 years onward, kids are more able to compete. But again, if you emphasise winning above everything from that age … were you at Stephan’s presentation? Stephan (Widmer) was saying that the kids that are winning races or games at age 12 or 13, they are not the guys winning gold medals 10 years later. There is hardly any correlation between those two.

So yes, competition is good at that point, but if winning becomes the only thing, there is a danger there, because what might happen is that it turns off all the talented kids that might not be able to win at 12 or 13 years of age, but 10 years later, they will be your best athletes.

So again, it’s how we manage competitions rather than the act of competing by itself. So the problem is, if we only value a coach because his or her team of 12 year olds is the national champion, that means that coaches will be trained to win at 12.

So I am not against competition, I am not against winning or losing, but it is doing it in the right way, cos when it gets emphasised over everything else, it has a massive impact on the rest of the system.

For example, in football academies in Spain, where I come from originally, there are a number of football academies, for example the Barcelona football academy, they don’t really value or put a lot of emphasis on winning junior national titles. They evaluate their success on how many players from our junior programme can play for the first team 10 years later. Winning the under-14, under-16, under 18 national championships means nothing to them if those kids don’t progress to the first team. I think that’s a leap of faith organisations have to take.

Red Sports: Do youth athletes learn most from training or competition?
Lara-Bercial: I think they should be learning all the time. They might learn different things in different situations. And that’s why I am not against competitions because you learn a lot in competitions. And with older athletes, you have to create a very competitive environment in training because if you are only learning to compete at the weekend (in games), you are wasting valuable time with them. So I think you can learn in both environments, and every environment gives you something different.

We go back to something that Stephan said before in doing season planning, you need to do career planning, to plan long term. So what is it that the youth athletes need? And if they need to learn some technical skills, some basic tactical skills, how are you going to get them to learn that using the combination of training and competition?

When I am coaching, I use competition in a developmental way. So when I go to a game, my main goal is not to win that game. It’s to use that game so that the kids can keep learning the things we have been working on during the week. There have been times when I have won games and I’ve gone home really unhappy. We had won that game but we didn’t learn anything or we weren’t true to our philosophy of ‘It’s not about winning, it’s about development’.