“High jump may be an individual event, but we don’t have to do it alone.” – Michelle Sng 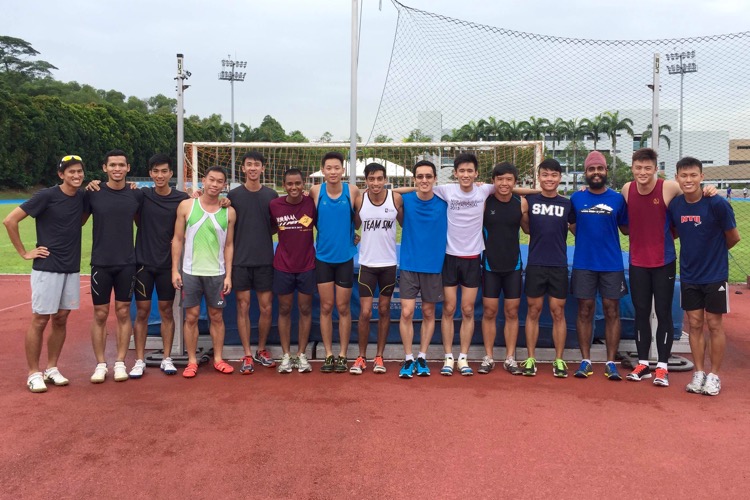 The men’s open category was won by Khan Meng Linn with a jump of 1.75m. (Photo 1 courtesy of Ronnie Cai)

Michelle, who set the high jump national record of 1.84m in March 2015, also won the bronze medal at the home 2015 Southeast Asian Games.

We caught up with Michelle to find out what led to the event.

Red Sports: What motivated you to create this event?
Michelle: High jump has never been one of those popular events for athletes to take up, and to be very honest, the retention rate hasn’t been great in recent years either.

Since the last SEA Games, I’ve been thinking really hard about what I can do for my event to ensure that when I retire (again), there will be some sort of a support system for high jumpers locally.

On my end, I’ve been trying to create a community of high jumpers who are passionate and driven. High jump may be an individual event, but we don’t have to do it alone. Training will always be more bearable when there are others suffering with you! I’d like to believe that this team of high jumpers has grown not just in strength and achievements, but also together as a family.

Together with former national high jumpers Ronnie Cai and David Woon, we decided that we wanted to create more opportunities for athletes to compete throughout the year, and to be able to compete against others not usually in their categories, such as JC students against Polytechnic students.

Last December, Ronnie and David kickstarted the Singapore High Jump series with athletes from a few schools but we decided to have a scissors edition this time to encourage athletes from different events to join us. In the long run, we hope to be able to grow the sport locally as well as regionally.

Red Sports: Did you expect 40 people to sign up?
Michelle: During our discussions, we were aiming to get 30 participants for the competition, which in our opinion was already a feat. High jump is not a popular event and we don’t even see that many athletes at our local meets, so why would they come for ours?

I’m extremely grateful to adidas for coming on board to support the event – they provided us with goodies for all participants and vouchers for the winners – and I believe that that helped boost the participation numbers.

To level the playing field, we decided on using the scissors technique because it is much easier and not all high jumpers are great at it (I’m terrible at it!). I think that may have contributed to the larger numbers as well because it has not been done before and it gave everyone a shot at making the podium.

Red Sports: Tell us about your own sporting journey – how did you get into the sport?
Michelle: When I was in Secondary 1 in 2001, I was the sports captain of my class. During the selections for the inter-class sports day, nobody wanted to participate in the high jump event, for a good reason – it is extremely daunting to jump over a bar.

I decided to take on the challenge and printed out some notes from the internet to learn more about high jump. After that competition where I equaled the school record of 1.51m, I was asked to participate at the National Schools Championships where I won the gold for SCGS.

My journey in high jump from then was rather smooth sailing until 2007 when I sustained a stress fracture to my left shin. Despite undergoing surgery, I could not fully recover from the ordeal and eventually left the sport in 2011.

After some encouragement and a lot of persuasion from my coach, Chan See Huey, I made a comeback in 2014 and I am very glad I had done so.

Red Sports: What keeps you going?
Michelle: Knowing that I can always be better. I want to continue to break my personal best and the national record to attain greater heights.

I’m also very lucky to have my high jump family with me. They have been the most supportive – celebrating my triumphs with me and picking me up when I’m at my lowest. I wouldn’t be able to do this without them.

Red Sports: What has been the most interesting place you have visited as a result of competing?
Michelle: I have to say Mauritius. We do get to travel quite a fair bit with Singapore Athletics, but never too far from home, so Mauritius was an interesting experience. The island was on typhoon alert so we were affected by the strong winds. The athletes didn’t jump so well but it was a good learning experience for me.

Red Sports: What are highlights of your sporting journey that you will remember forever?
Michelle: I’ll pick three of my favourite moments, not in order.

My third national record in 2015 – I was trying to make my come back after having left athletics for three years. Finally, after 16 months of training, I managed to break my previous record with a height of 1.84m, and at the same time, secured my spot at the 2015 SEA Games. My first thought was, “finally.”

Winning the bronze medal at the 2015 SEA Games – I was up against really formidable opponents from the region, with three Olympians in the start list. Stepping on that podium after leaving the sport because of injury was extremely emotional for me.