“Without KPMG’s support, I could possibly have ended my bowling career.” — Jasmine Yeong-Nathan, national kegler 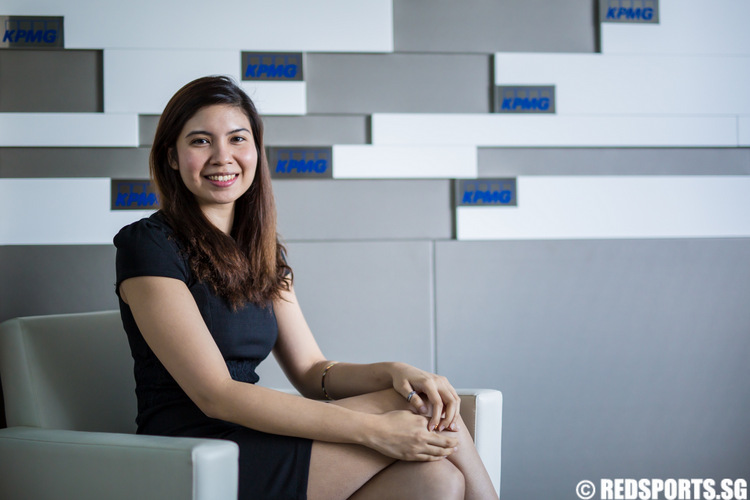 During a lean six-year period after winning the AMF World Cup in 2008, Jasmine was grateful for KPMG’s sustained support, without which, she said, she could have quit bowling. In 2014, she broke her dry spell by winning the women’s open masters crown at the National Bowling Championships. Then, this year, she was part of the Singapore team of five that won silver at the Asian Tenpin Bowling Championships. (Photo 1 © Lim Yong Teck/Red Sports)

Jasmine Yeong-Nathan is a national 10-pin bowler. The 26-year-old was the first Singaporean to win the AMF World Cup in 2008, which led to her earning the Singapore Sportswoman of the Year award in 2009. She is also a two-time (2005 and 2014) women’s national bowling champion, and has represented Singapore at two Southeast Asian (SEA) Games (2007 in Korat, Thailand; and 2011 in Jakarta, Indonesia).

Jasmine works for KPMG, which is one of the largest professional services (audit, tax, and advisory) companies in the world and, also, one of Sport Singapore’s 21 corporate partners under the spexCareer scheme‘s spexBusiness Network for Athletes. Last year, KPMG granted Jasmine a one-year sabbatical to allow her to focus on training to qualify for the 2014 Asian Games and 2015 SEA Games teams.

In this interview, the Singapore Polytechnic and Nanyang Technological University alumnus tells Red Sports about how she started working at KPMG, the support that KPMG gives her as a national athlete, and her sporting journey in general.

Colin Tung, Red Sports (RS): You’ve been with PEAK (Programme for Elite Athletes in KPMG) since 2009. Is this your first job after graduation?
Jasmine (J): Yes, it is.

RS: Could you describe what that journey was in terms of getting on the spexCareer programme, getting in touch with KPMG and, finally, getting this job here?
J: When KPMG first started the PEAK programme in 2009, I just graduated from Singapore Polytechnic actually. That’s when I was given this opportunity to work, with a very flexible schedule while I bowl.

(Jasmine then took a break from working at KPMG when she started university in 2010.)

While in business school at NTU, they gave me the opportunity to come back to do an internship. Then, after that, when I graduated, I came back full-time (before taking a year’s sabbatical last year).

RS: How was that connection made for you to find work at KPMG after graduating from SP?
J: I guess it was very good timing because I had just won the World Cup in 2008, and (Leong) Kok Keong (an audit partner with KPMG and its head of financial services) was starting PEAK up. KPMG approached me and I thought it would be a very good opportunity for myself, and that’s how it all started.

RS: You’re now a management consulting associate. Was this your first position after starting or did you hold other roles as well before this?
J: When I first joined KPMG in 2009, I was in the communications department. Then, after that, I joined the corporate finance department. I got to work with a few management consultants during that period of time, and I found out more about what they did and I really liked it. So, when I graduated, I just went on that path (of management consulting).

RS: Could you describe a typical day for you in KPMG before you went on your one-year sabbatical? To take that further, what was a typical week for you in terms of juggling your sport as well as your career?
J: For a typical day, office hours are 9am to 6pm. Then I head for training from 7pm to 9pm. Then, after that, if there’s a little bit more work, I have to do my part. If not, then the whole day starts again. In terms of gym, I’ll have to squeeze the sessions in at night on Mondays, Wednesdays, and Fridays.

RS: So how has KPMG supported you in your sporting pursuits thus far?
J: The most obvious of them all is the flexible time. So whenever I need to travel for overseas tournaments, I would let them know in advance. But they are very supportive of it.

RS: Is there any one sporting milestone you’ve achieved that you recall KPMG having a big hand in?
J: In 2009, after my World Cup (in 2008), I was having a very quiet time on the lanes because I was making some major changes to my bowling. I was still on the national team but I wasn’t winning anything major until last year, when I won the nationals and, then, this year, at the Asian Tenpin Bowling Championships, we did well and won silver as a team. That was just a solid six years of support for me.

I think, without their support, I could possibly have ended my bowling career. It would have been hard to continue bowling.

RS: What made you take this decision to go on a sabbatical?
J: Last year, it was the Asian Games and it was something that I wanted to train for. In the long run, it is actually the upcoming SEA Games on home ground. We were travelling to quite a few countries, and the amount of leave I was going to take meant I would perpetually not be in the office anyway.

Once the (Asian Games) team was announced (she was not part of the team), there were still so many more tournaments that I needed to go to to be exposed to competition and to just get my game back on track to make the team for the SEA Games.

RS: How do you think corporations can gain from athletes like yourself who are onboard the spexCareer programme?
J: I think we have a very different set of skills and a different kind of world view compared to the people that go to school (and are purely focused on academics). We (athletes) get a very different sort of exposure to the world.

Athletes would also be passionate about their jobs because they would tend to choose to do what they are passionate about. I don’t think I’ve met an athlete who just stops halfway because, if you’re an athlete, you would want to see things through.

Athletes would also need to be very disciplined, handle time very well, be organised, and be very driven so we are very competitive people in that sense. Whatever you do, you want the very best out of it.

We also have many teammates, which teaches us to be team players because this is something that we grew up with.

Also read: “It’s a lot easier for us knowing we have the support of the company so that I can earn my keep and still do what I like.” — Micky Lin, national netball team captain, on juggling sports and work at Deloitte