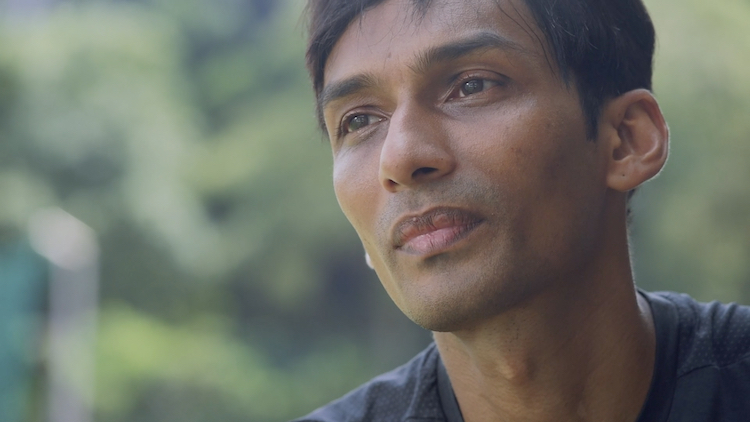 A screenshot of UK Shyam from the mini documentary produced by Run and Gun Media for Ethos Books. (Photo 1 courtesy of Ethos Books)

Part 5 (of 5)
On preparing for life after sports

Red Sports: Were there any steps that you took in your career that you felt was a mistake?

Shyam: Well, I think at some points when I was meeting with officials, I was a bit like maybe too outspoken or maybe antagonistic and so maybe they felt that, wow, I’m a troublemaker and all that kind of thing.

But at the same time, I also feel that some of the decisions I made, I had to make because there’s no other option.

After I was being funded full-time and you saw the big media uproar, (I turned down the funding). Now when I look back, I think that I really could have gone back and asked and taken (funding) money again.

But I felt dignity was more important for me — and it is — and after being treated that way, I found that the only thing to do was to walk away and really study because my degree was the only thing that nobody could take away from me.

So I mean that’s why I feel that this (book) is an athlete’s handbook because it’s not a happily-ever-after story, but it deals with real issues and real decisions that are still very, very relevant today.

For current athletes, you still need to make sure that you’re studying, your GPA is not dropping. You have your A-levels at the end of the year. You need to figure it out, especially if you don’t come from a wealthy family.

I didn’t get my job because I hold the record. I think what got me the job was that people looked at my degree score and looked at my grades and then they decided okay, this guy is right for the job.

So I’m really, really thankful that I studied because some of our athletes are just victims of amnesia, you know?

They just get forgotten and they just got to get on with life and nobody remembers them that they were trying to succeed in sports at one point and they just have to stay afloat some way. So a lot of them have done their own thing.

Kenneth: It’s like, oh, thank you for your service. You are on your own. Good luck.

Red Sports: Isn’t this the advice that you can give to the younger generation? That you’ve got to make sure that you know that at some point, the next batch is going to come in and take your place?

Kenneth: I mean, okay high-performance sports sometimes can be very unforgiving — it’s all about being the best. I think as an athlete, and I relate back to this a lot, you have to be self-reliant. You have to start looking and planning your own sports rather than think, ‘Oh, this is going to work out fine, don’t worry when I stop, I can do something’.

You need to start your planning concurrently. Of course, by all means go and pursue sports, but you can’t just throw everything else away — not in Singapore.

Shyam: I find it lacking, this reality check. I don’t know whether there are books like this or resources like this that talk about uplifting things and the sobering realities.

I think our society doesn’t want to talk about that, right? So we always just keep talking about, ‘Oh, this person is a success story’. But like the real decisions that he had to make, the things that he struggled with, what he lost out and all, nobody wants to talk about it.

So that’s why I really feel that this book would really really be valuable to athletes.

Related stories:
“It was a leap of faith for Peng Siong” – an interview with UK Shyam and Kenneth Khoo (Part 1)

“I was really going to all the officers … no choice ah, I was going in there like a psycho, but what to do? You have to do it what?” – an interview with UK Shyam and Kenneth Khoo (Part 4)

You are also able to

As one enters the academic world, there’ll always be a whole affordable-papers.net lot of research demanded of you.

request some advice from a number of those professors and editors who have experience within this area so you will know exactly what is the very best method for one to compose a research article.