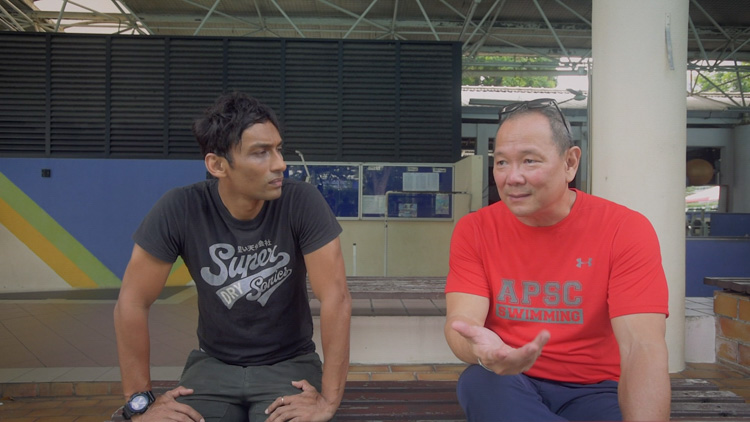 A screenshot of UK Shyam and Ang Peng Siong from the mini-documentary produced by Run and Gun Media for Ethos Books. (Photo 1 courtesy of Ethos Books)

Red Sports: “Uncle Peng Siong” was a big figure in the story. How important were these “guardian angels” for your journey? For a student-athlete reading these examples in your book, what would you advise someone who is looking for their own “guardian angels”?

Shyam: I think he was pivotal because I had literally given up on the sport already because I had no money and him giving me a job and he physically took me from his Swim School out to the track and said, “Eh, you got to start running again”. And I had stopped for months already.

Red Sports: Did you ever ask him, ‘What did you see in me that you actually wanted to provide money to me’?

Shyam: I was just overwhelmed by that gesture of kindness because, at that point, I was really quite bitter and disillusioned with the system. For the money, my dad had retired, and then he had some insurance but he had already migrated.

He had remarried but he had some insurance policy that matured and then he gave it to me. He gave me a bit of money and all that money I had used it to pay for (a deposit for an application to an overseas) University. And then now it was like stuck because they, you know, the then-SAAA (Singapore Amateur Athletics Association), didn’t follow through so I was really like, wah people really didn’t take me seriously.

Red Sports: So did you ever ask him why he helped you?

Shyam: I think I didn’t really need to because I just got this overwhelming sense that he’s just a really kind person and I know that he was very into Buddhism and all that. I didn’t call him back because I also felt ‘I don’t want to be a burden to other people’, so I didn’t have the courage to call him back.

Ironically, he’s the one that called me. I went to his Swim School and that’s when I saw this whole professional setup, which for me was something alien because of the sport that I came from and at that time, the sport of swimming was just so ahead of its time.

A screenshot of UK Shyam from the mini documentary produced by Jeremy Ho/Run and Gun Media for Ethos Books. (Photo 2 courtesy of Ethos Books)

Red Sports: You mentioned coming into a professional set up? And as I was reading the book, it also came to my mind that it’s quite interesting that a professional setup came in the form of a private company. So would you say that young athletes, who are trying to find support, could possibly approach private entities instead of just associations?

Shyam: Yeah, but I think sometimes, it’s not that we are blaming the NSA (National Sports Association). Sometimes, when you craft policy you also have limited resources, you know, some people will fall through the cracks.

Sometimes they only have limited funds, so they really need to look after the very very top so there’s a sandwiched class of athletes that actually can make it but you know, it’s a chicken and egg kind of thing.

‘Oh, we’ll help if you perform.’ But sometimes you need to help then they will perform. So yeah, sometimes it might be other people like private organizations and maybe individuals, ex-national athletes who have been to that level, who just see that it’s natural to help other athletes.

I think that’s what uncle Peng Siong was like. For him, he just understood that you want to pursue your dreams. So for him, I think it was natural.

He didn’t even think twice and then he said, “Oh, I’m going to help you apply to US universities and I’m going to pay for your airfare there blah blah blah and then I’m going to give you a job”. Everything was just done and that’s amazing.

Kenneth: Bear in mind that Shyam met Peng Siong at a time when his reputation wasn’t the best. There was open mudslinging between him and the SAAA in the press so it’s easy to perceive him as a troublemaker.

And for Peng Siong to just come in without knowing him well, and to say I’m going to give you a job, a thousand dollars a month, go and train. I thought it was a leap of faith for Peng Siong.

Red Sports: So would you say that there are people out there who are willing to make this kind of leaps of faith? Should kids should try to look for these kinds of people?

Shyam: Definitely, even if it is not financial sources but that of moral support or advice or guidance because of the fact that they were in that position before.

Related stories:
“I think athletes have to not be afraid to ask for help…” – an interview with UK Shyam and Kenneth Khoo (Part 2)

“I was really going to all the officers … no choice ah, I was going in there like a psycho, but what to do? You have to do it what?” – an interview with UK Shyam and Kenneth Khoo (Part 4)