How do they train youth players at Ajax football club? They learn judo 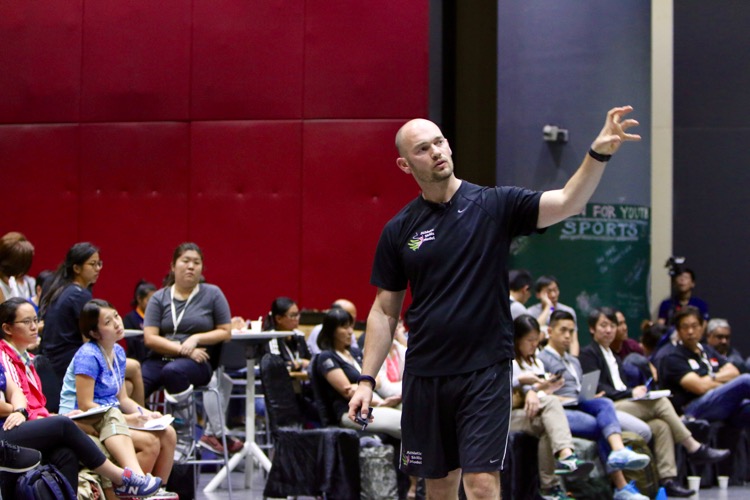 *SCAPE, Friday, November 3, 2017 — An under-10 Amsterdamsche Football Club (AFC) Ajax footballer is pushed by a bigger player. The boy falls over but – to gasps from parents watching in the stands – he does a judo somersault, lands on his feet, and continues his run towards goal with the ball.

At AFC Ajax, youth footballers spend 50 percent of their time on football. The other 50 percent? They learn other sports. Only as they age do they gradually specialise in football.

That’s the Athletes Skills Model that Mr Jan Willem Teunissen was in town to share with over 200 professionals, educators and administrators at the Youth Athlete Development Conference.

“What can we do today? We have to look at the developmental process of young children, rather than look for activities. Create a rich, learning environment for children to find their own solution to movement problems. That will help children to develop their potential the best,” said Teunissen, who is currently a Lecturer and Researcher in Talent Development and Identification at the HAN University of Applied Sciences.

Previously, Teunissen worked at AFC Ajax as a movement scientist and physical trainer. At the AFC Ajax academy, he implemented the Athletic Skills Model and further developed the concept of programming from a biological-age standpoint.

“Jan’s talk was brilliant. A synthesis of sound theoretical basis and practical application, Jan expertly emphasized the importance of acquiring sound coordinative abilities and basic movement skills through a wide range of activities to reduce burnout and injury risk and maximize sports performance. Particularly loved the practical variations introduced and the encouragement for athletes to be creative in finding movement solutions through self-discovery,” said Mr Quintin Roman, NYSI Head of Strength and Conditioning.

Teunissen shared the multi-sport experience of two well known athletes, Zlatan Ibrahimovic and Yelena Isinbayeva, which struck a chord with some in the audience.

“Jan mentioned about physical literacy and the need to have a varied sports exposure and the transferability of skills. Footballer Zlatan Ibrahimovic’s exposure to martial arts allowed him to use some of these skills in football at a high level. These skills are not taught by his football coaches for sure, yet he adapted the martial art skills to be most effective on the field,” said Mr Vincent Ong, NYSI Head of Youth Coaching.

“Another example given was pole vaulting champion, Yelena Isinbayeva, who had previous gymnastics training but was rejected because she became too tall for artistic gymnastics. She was talent spotted for pole vaulting and went on to be a multiple world champion in that discipline by transferring those gymnastic skills to pole vaulting,” added Mr Ong.

To demonstrate what he meant, Teunissen involved some conference participants to show how athletes can adapt to new and stimulating physical challenges.

In Singapore, athletes tend to specialise too early, a situation Mr Richard Seow, Chairman of Sport Singapore, raised in his opening speech at the conference.

“The consequence of a lack of a sport season coupled with the DSA (Direct School Admission) pathway is that our youth athletes tend to specialize in their chosen sports too early. By age 8-9, many of our youth athletes are playing only one sport throughout the year. For a small country like ours, this is sub optimal for generating results in developing a pipeline of talent across all sports,” said Mr Seow.

The conference was organised by the National Youth Sports Institute (NYSI). NYSI is an agency under the Ministry of Culture, Community and Youth and was set up in Nov 2015 to positively impact the Singapore youth sports ecosystem.