Are you picking talented youth? Or just the older player? Beware the Relative Age Effect 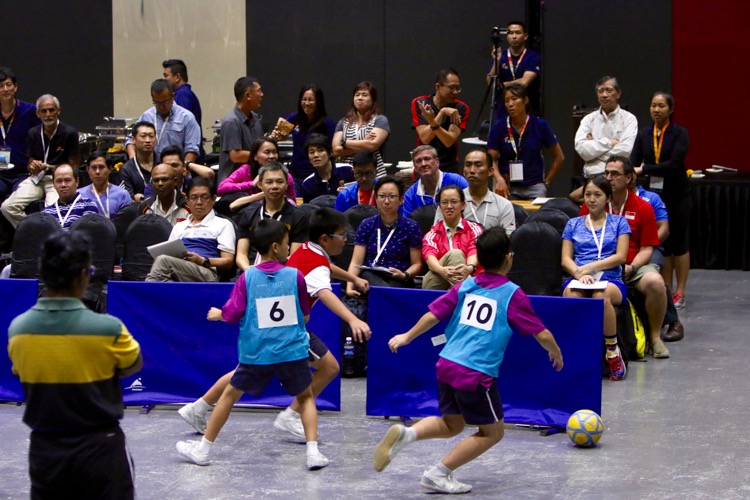 Rosyth School students play a 4v4 football game as conference participants pick who they think are the more talented players. It was a practical session to show the Relative Age Effect bias. (Photo 1 courtesy of NYSI)

*SCAPE, Friday, November 3, 2017 — We see a group of primary school boys playing football. We think we can spot who is more talented. In actual fact, all we may be doing is just picking the older boy.

“Coaches might think they are selecting the most talented players for their teams, but they are often just picking the oldest children,” said Dr David Mann at the Youth Athlete Development Conference organised by the National Youth Sports Institute (NYSI).

Dr Mann looked at the birthdates of the international football players aged 15 to 18 from the Netherlands, Belgium, England, France, Germany, Spain, and Italy. Most of the players were born earlier in the year, and in the case of Germany and England, 50 percent of their players were born in the January-March period.

This selection bias was vividly illustrated by Dr Mann in his practical session that involved Rosyth School boys playing 4v4 football games in front of a large group of professionals, educators, and administrators from the sports industry. When asked to pick the talented players, the players born earlier in the year were favoured.

This phenomenon, also known as the relative age effect (RAE), is further compounded by the influences of maturity. Individuals who are also early maturers physically have a much greater likelihood of being selected into sporting teams.

“Dr Mann provided a practical approach of potentially eliminating the effect of RAE by having athletes wear t-shirts with numbers that were ordered according to his age, thereby providing a more observable method to account for the birthdates of players when making team selections,” said NYSI Physiologist Dr Haresh Suppiah.

“While issues pertaining to RAE are well understood by youth coaches, these issues persist in many talent development environments. The solution developed by David Mann and colleagues at the Vrije Universiteit Amsterdam is so powerful due to its simplicity,” said Matthew Wylde, NYSI Head of Performance Analytics.

“This selection bias can result in potentially talented athletes born towards the end of the year dropping out of a sport before fully developing,” added Wylde.

The effect persists into adulthood because those are identified as ‘talented’ get access to better coaching and facilities, said Dr Mann. He also highlighted that the effect was stronger in sports where performance in part relies on size and strength, giving ice-hockey, American football, and basketball as examples.

In sports that have high cultural importance in the society, there is strong competition for places and talented athletes are identified at an early age, and relative age counts more, the younger the athlete.