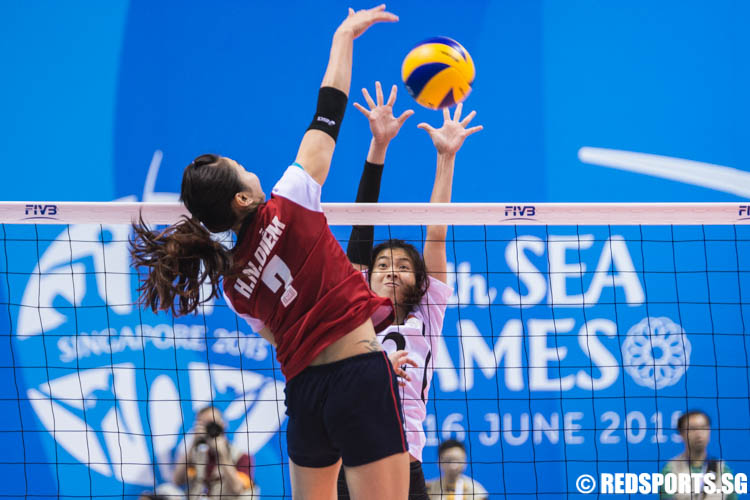 With the defeat, Singapore finish with a bronze.

“I am disappointed,” said head coach Narita Akihiko. “Today’s performance was not good. The fighting spirit was not the same as yesterday’s match. The players were a bit stiff and their heads were down. The team does not have much international experience so this match was good exposure for them. Maybe at the next SEA Games, we’ll do better after more international experience.”

Singapore took a quick 5-1 lead but were soon pegged back as Vietnam tied the game 7-7. The visitors eventually took the lead at 12-11 as clever drop shots deceived the host to rack up the points. Singapore could not find a way past their defence and lost the first set 17-25.

The second set belonged to the Vietnamese. Mistakes by Singapore gifted points to their opponents as they fell behind by double digits. Vietnam took the second set 25-12.

The home side played better in the third set and were able to take an early lead. However, unstoppable spikes by Thi Thanh Thuy Tran and Ngoc Diem Ha proved too much to handle for the home side. Despite saving a couple of match points, Singapore eventually went down fighting as Vietnam took the set 25-14.

“Win or lose, we did our best,” said captain Quek Soo Teng. “Vietnam were a bit rocking at the start, probably because they did not think we’ll play that well. They awaken after the first set. At the start, we did well but we lost our focus. After that, we could not get back the momentum. We slowly got it back, but by the third set, it was too late to catch up.”

Soo Teng, playing in her last SEA Games, added, “When they set up this team in 2012, my goal was to play in the SEA Games and to end on a high with a bronze medal, it is amazing. I hope a bronze medal in this SEA Games would form a base for volleyball in Singapore to progress to the next level.”