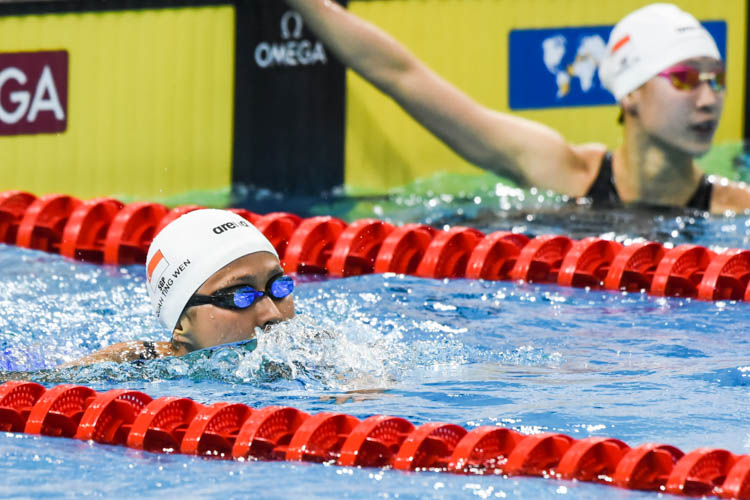 Quah Ting Wen catches her breath after winning the Women’s 50m Freestyle A-final with a time of 25.26 seconds. She had earlier clocked 25.15s in the heats to set a new meet record and be within touching distance of her 25.07s national record. (Photo 1 © Iman Hashim/Red Sports)

OCBC Aquatic Centre, Saturday, June 22, 2019 — The 15th Singapore National Swimming Championships (SNSC) came to a close with two individual and one relay meet record broken on the fourth and final day of competition.

In the final held later in the afternoon, however, Ting Wen’s winning time of 25.26s failed to meet her goal of breaking the 25-second barrier during the meet.

“In the morning, I might have gotten too focused on my dive, which was a bit bad in the 100m Freestlye a few days ago, and my form broke down a lot in the last 15m. For the finals, I was hoping to maintain the high stroke rate for the whole race but the moment I dived in, I could instinctively tell that it was not going to be one of my better races,” said Ting Wen.

“I really hoped to see a 24 on the board, so maybe I am more upset than usual over the result. For the 50m, it is only about 25 seconds. It is the most frustrating part because in the 100m or 200m, you still have time to change things be it your stroke or your mindset, but in the 50m it’s just all-out from the beginning,” she added.

In the Men’s 1500m Freestyle, 17-year-old Glen Lim lowered his own meet record of 15 minutes 56.75 seconds by over 10 seconds; however his 15:45.72 performance was only good enough for bronze as Thai swimmers Advait Page and Aryan Nehra clinched the top two spots. Foreigners are excluded from the SNSC’s meet records.

See the full results of the final day of the 15th SNSC here.