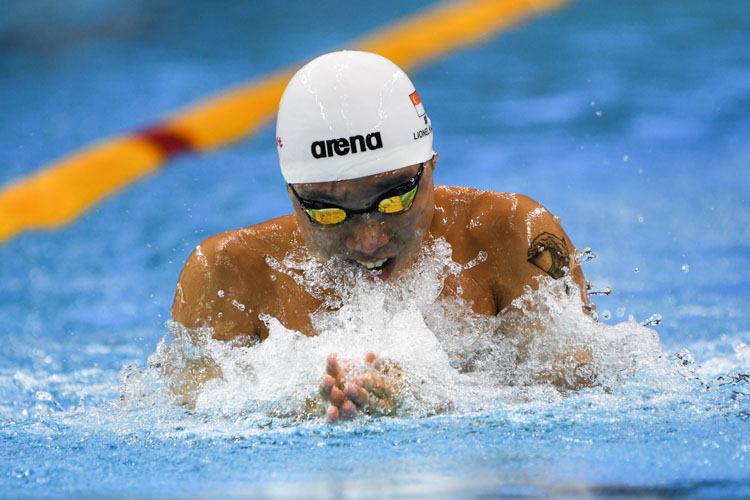 OCBC Aquatic Centre, Friday, June 21, 2019 — Only one meet record was felled by a local on the third and penultimate day of the Neo Garden 15th Singapore National Swimming Championships (SNSC) as Lionel Khoo set a new mark of 28.08 seconds in the men’s 50-metre breaststroke heats.

“Recently I’ve been trying to look at things in a new way, by seeing every meet as an opportunity to do better,” said the undergraduate at the University of South Carolina. “So I would say I came in today very confident of being able to do better (than previous bests).”

The breaststroke specialist also outdid his lifetime best of 28.19s set at last year’s Asian Games in Jakarta, and is now only five-hundredths of a second shy of the 28.03s national record held by Parker Lam since 2009.

“I just come in every day hoping to train at my best, and I guess the results will show in races,” Khoo added, with one eye on the World Championships next month and the Southeast Asian Games later in the year.

On a rather uneventful day of events, the biggest news turned out to be Joseph Schooling’s withdrawal from the 100m butterfly final after clocking a modest 54.63s in the morning heats.

However, National Training Centre head coach Gary Tan allayed any worries regarding illness or injury, saying that it was a “collective decision” between the athlete and coaching staff for the Olympic champion to be in better shape and frame of mind for the upcoming world meet in Gwangju.

In the same event, Raffles Institution student Randall Neo established a new national under-14 record of 56.73s in the heats. The Chinese Swimming Club representative’s time cracked the previous record of 57.15s set by Dylan Koo in 2013.

See the full results of the third day of the 2019 SNSC championships here.