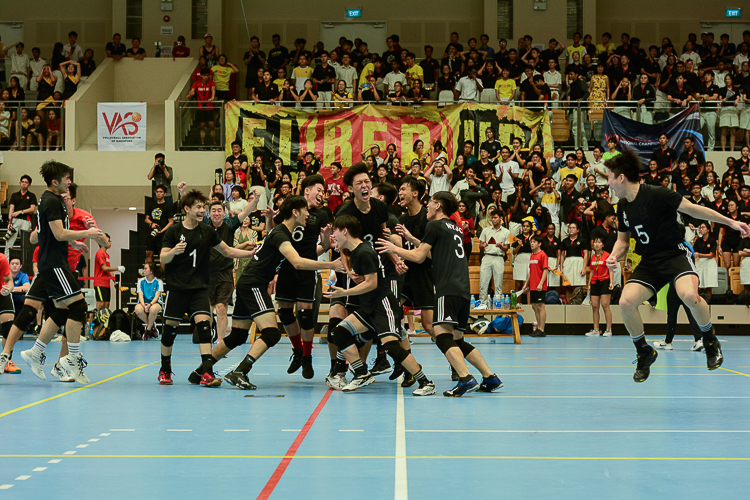 Our Tampines Hub, Wednesday, May 8, 2019 — For the third year running, Nanyang Junior College (NYJC) clinched the National A Division Volleyball championship title. They showcased unfazed resilience and successfully defended their title from Victoria Junior College (VJC). It was a close match of 19-25, 27-25, 25-21 and 27-25, resulting in a 3-1 victory.

“Overall, I am quite satisfied with our performance,” said team captain Lai Boon Yi (NYJC #1). “And I feel very good.”

However, while NYJC’s spikers generated a lot of power, the setters of VJC provided well-timed sets and even managed to score a few points themselves.

Hur Young Gwan (VJC #12) secured a point with a backward set, a move that NYJC blockers did not foresee. The 25th point was earned by Edmund Wei (VJC #5), who sealed the first set with a fake spike that was actually a tip over the two-metres tall net.

The first set thus ended in a scoreline of 25-19, with VJC in a one-point lead overall.

The second set was a closer one, with the schools matching each other point for point. The setters from VJC displayed their skill with carefully calculated sets that rendered NYJC unable to follow. However, NYJC continued to bolster through the set with their unrelenting attacks, bringing the set to a deuce. The point-for-point game extended to 27-25, where NYJC brought home the second set.

Commendable offensive performance by Nigel Wee (NYJC #5) was crucial in reeling in a 25-21 victory for NYJC in the third set. It was the fourth set that required utmost effort from both teams. The game of margins began once again, with special mention to Alastair Chan (VJC #10), who stretched VJC’s defense capabilities.

Libero Lee Zibin (NYJC #9) defended his heart out, often diving beyond ends of the court to prevent the score from fluctuating. The score landed at 23-21, with NYJC down by two points. It took them only a minute to drive the scoreline to a 23-23 draw, displaying their refusal to lose the set and an opportunity to secure a win within the fourth quarter.

The remaining few points were scored alternatively, but a failed serve by VJC drew them level. While VJC had a chance to attack again, impressive blocking play left NYJC one point away from securing the championship title.

NYJC thus defended their title, marking yet again another year — their third in a row — of double gold for both girls’ and boys’ finals.

“In the end, the journey was worth it. Throughout the season, we had good team morale. We cheered for each other, together with the supporters. That was, and still is, our strength.”