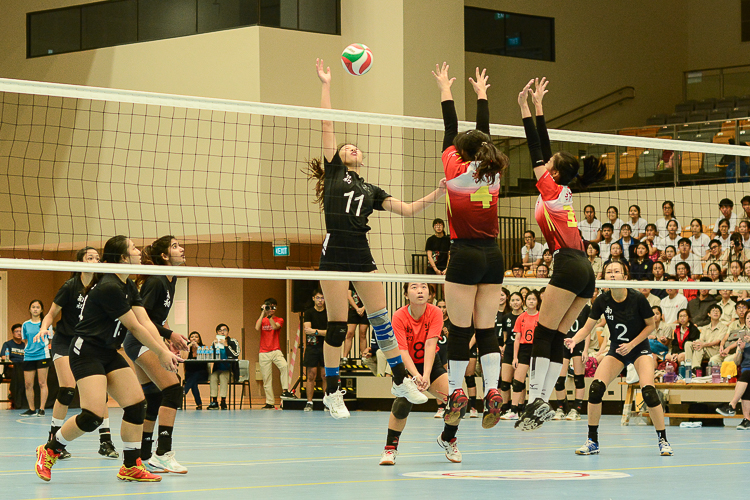 Chloe Koh (NYJC #11) spikes the ball past her HCI defenders on the way to winning the A Division Girls Volleyball Championship. (Photo 1 © Zachary Foo/Red Sports)

“It felt very heartwarming when the game ended. It was worth the six years of our volleyball life, and while there was no pressure when the last point was scored, I’m just thankful that I could contribute to the team,” said Esther Eso (NYJC #4).

“At that moment, I am just grateful that we not only did it, but we did it together as a team,” added team captain Chloe Koh (NYJC #11).

In the first set, Valencia Cheong (NYJC #2) seized the first point against HCI with a strong spike. A three-point streak ensued, broken by a failed serve into HCI’s court.

Nevertheless, NYJC established the offensive upper-hand with spikers Astrid Lee (NYJC #10) and Valencia (NYJC #2). This caused a struggle to return the balls and every attack forced HCI into an immediate defensive stance, preventing much points to be scored.

Midway into the set, there was a strategic difference in HCI’s gameplay as taller players were being substituted into court. Despite an impressive effort by the starting lineup, NYJC had a physical advantage that had to be countered. This made technical elements secondary to the team’s physical capabilities, especially with regards to height.

The abrupt change and current beatdown of 14-4 had HCI’s players shaken up as they began to concede more errors. NYJC eventually dominated HCI in the first set and led to a score of 25-9.

However, HCI were not going down without a fight. The pace of the game began to pick up in the second and third set, as HCI grew hungrier for more points. NYJC took a 14-10 lead in the second set, holding on to their service points. But unlike before, HCI were determined to keep the point difference low. Nevertheless, NYJC remained steady to deliver the second set with a 25-15.

The last set saw the best performance from HCI. While NYJC continued to take a 14-12 lead, HCI showcased their strong refusal to go down without a fight.

Sturdy blocking play and aggressive offense racked up HCI’s points to 16, but NYJC’s hunger and skill won out in the end. NYJC ended the fight with a spike from Esther (NYJC #4), sealing the third set and overall victory.

“I think we went into the game giving our all and knowing that we are going to fight till the very end. We tried, and we did our best,” shared Ang Hui Wei (HCI #1).

“One thing that always motivates us is the mindset to keep pushing, and showing the Hwa Chong spirit. To never give up during the ups nor the downs.”