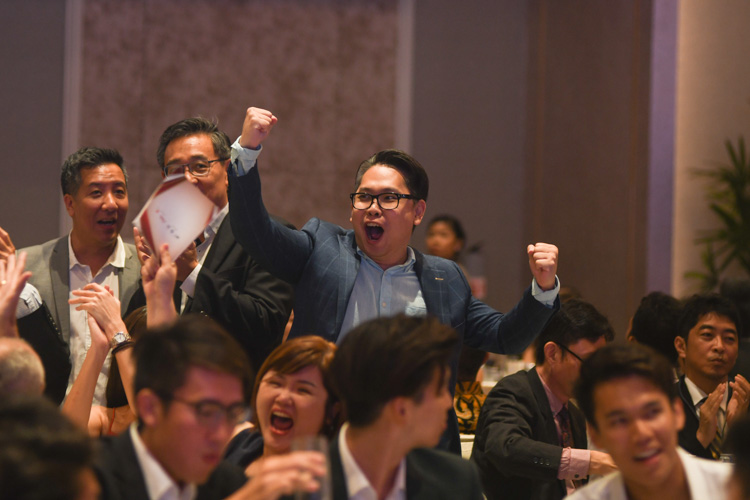 Orchard Grand Ballroom, Tuesday, May 14, 2019 — The 2018 FINA Swimming World Cup Singapore Presented by Yakult picked up the Best Sports Event of the Year (International) accolade at the annual Singapore Sports Awards. This is the event’s maiden win in the category, though it has been shortlisted for the last six years.

In a ceremony held at Orchard Hotel, representatives from the organising team received the award after beating out contenders HSBC Women’s World Championship for golf and the HSBC Singapore Rugby Sevens. The latter had come out tops in this category for the past two years.

“We are totally overjoyed,” said Daniel Tan, communications and public relations manager of the Singapore Swimming Association. “The team behind this whole event has really put in a lot of effort into organising a world-class event, engaging all the participants, getting all the fans to come down and watch the world-class swimmers, so definitely for us this is a vindication and achievement for what we’ve been trying to do all these years.”

The swim event held in November last year saw a total of 387 competitors, with 182 foreign swimmers including Olympic and world champions compete over three days at the OCBC Aquatic Centre. Team Singapore swimmers set four new national records and won three medals, while Singapore — being the last leg of the World Cup — saw the crowning of the overall champions, Russia’s Vladimir Morozov and Sweden’s Sarah Sjostrom.

“People don’t see the hours behind organising such an event,” Tan added. “But there’s a lot of hard work involved from doing the liaison with the international swimmers to having the transportation, and of course we thank our sponsors for chipping in and helping us along the way as well.”

Tan said that for last year’s edition of the meet, the organisers had engaged sponsors to set up a carnival with booths outside the Aquatic Centre for fans to enjoy themselves before they entered the competition arena, and he believes this is the deciding factor that has won them the award.

“Nowadays, we look at the holistic picture — people come to sports events not just for the sports event itself, but also the entertainment around it,” he said. “So I think (the carnival) was quite well-received, and that’s one of the key points we look at to see how we can improve as well.”

This year’s Singapore leg of the FINA World Cup has been pushed forward to August.

Helen Soulsby, chair of the judging panel for the awards’ Events categories, validated the importance of community engagement for a successful sports event.

Outlining some of the criteria the judging panel looked at when deciding the winners, she said: “It revolves around commercial viability of the event, fan engagement, and community impact, which is really important for us here in Singapore because the events industry is really about driving the passion and awareness for sport, but also about driving the local community and making people feel connected to it.”

Soulsby acknowledged the difficulty of choosing the winners, saying: “We had some obvious big events that created an impact and had a big advertising budget, then we also had some events that were a little bit more under the radar, but the community impact and the engagement that they’ve had with the local community, coaches, volunteers and school children had really shone through this year.”

When asked by Red Sports if there is any chance of school sports events getting recognition in the future, Soulsby said: “It is not something that we have ignored. We have looked at how we can potentially incorporate local events whether it’s run by schools or local federations, but we’re not sure if we’ve got the answer to that yet.

For the Best Sports Event of the Year (Local) category, the M1 Asian Netball Championship 2018 clinched the award over the Great Eastern Women’s Run and Standard Chartered Singapore Marathon.

After receiving the accolade, Lye Puat Fong, Netball Singapore board member, said: “I think netball has really grown from strength to strength in terms of the number of people playing the game, the standards, and the organisation. I think we have a very solid organisation and we are continuing to look for people who will support the game. We have good sponsors as well, and that makes a lot of difference.”

Lye added that Netball Singapore has been trying to achieve higher spectatorship and involvement in the sport, and mentioned that for the Asian Netball Championship, they have tried to showcase the players and not just the game.

“Before the game, we profile certain players, and talk a bit about their personal life, not just netball,” said Lye. “And we have managed to bring in families to watch the game — parents, young kids and all that. I’ve also noticed a shift in audience, where there are more guys now. So it’s nice to see families coming to watch the game, and it’s very inclusive, in terms of age as well as race.

“I think we can probably give ourselves a pat on the back to say that, you know, we’ve done a good job, but we’re going to strive even better to make it a more spectacular spectator sport.”

A total of 12 awards were given out on the night, with Olympic swimming champion Joseph Schooling claiming his fifth straight and overall sixth Sportsman of the Year accolade for his 50m and 100m butterfly victories at last year’s Asian Games in Indonesia.

Meanwhile, shooter Martina Lindsay Veloso claimed her first Sportswoman of the Year award for her double gold in the 10m air rifle and 50m prone rifle at the Commonwealth Games, as well as setting a junior world record in the 50m three-position rifle event. 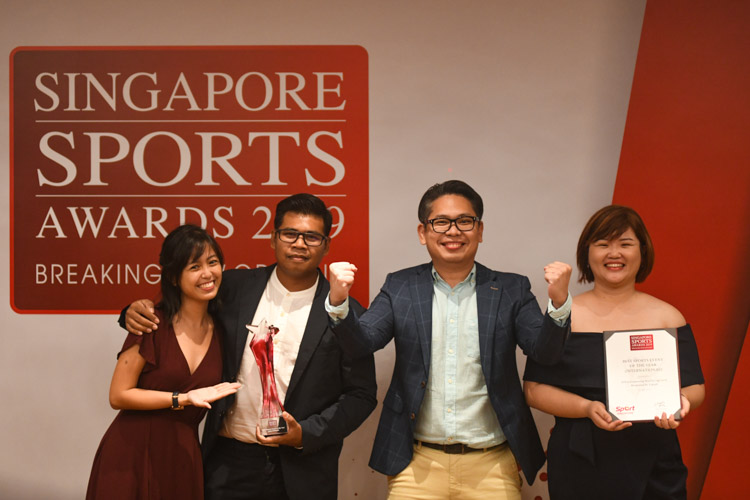 Sports Journalist of the Year: Dilenjit Singh (The New Paper)