Story and photos by Stefanus Ian and Iman Hashim/Red Sports. 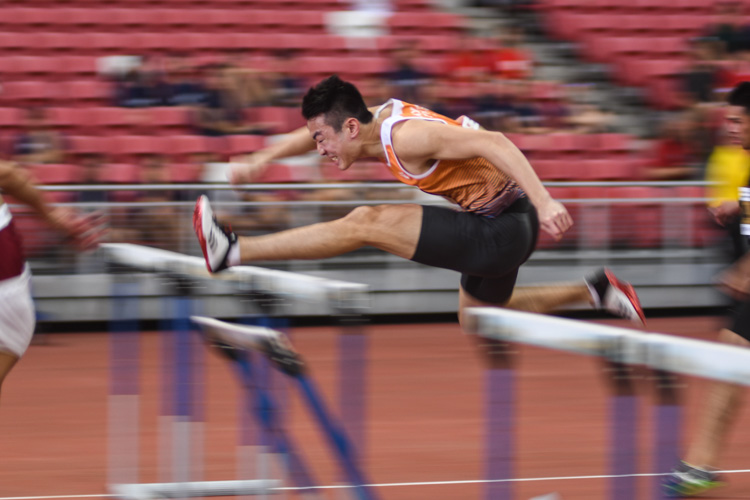 Ang Cheng Xiang rewrote the national record twice in the Men’s 110 metres hurdles event with a time of 14.27s in the heats and 14.26s in the final. (Photo 1 © Stefanus Ian/Red Sports)

National Stadium, Thursday, March 28, 2019 — Going into the final of the Men’s 110 metres hurdles event, Ang Chen Xiang was looking to rewrite the national record for the second time at the 81st Singapore Open after clocking 14.27 seconds in the heats, which bettered his previous mark of 14.36s.

But as he warmed up for the race, he did not even know if his body could make it to the finish line.

“I went to the first hurdle (during warm-up), my calves started cramping so I was like I knew my body was starting to complain,” said Chen Xiang.

“So I didn’t do too much, I just massaged myself a bit, got my body ready for the race.”

And true enough, the warm-up was an early indication of how his race was going to unfold.

Chen Xiang crossed the finish line in sixth place and was anxiously staring at the results board while recovering from the race. When the board flashed 14.26 seconds, he raised his right hand in elation as he bettered his heats timing by 0.01 second.

“You have to control the chaos that happens in a race, things don’t go your way. You just gotta get your job done and do it well,” added the National University of Singapore medical undergraduate.

After setting the national record in the first meet of the season, Chen Xiang will look to build on his performance as he heads to Doha for the 2019 Asian Athletics Championship.

Speaking of having a good start to the season, Shanti Pereira also came in second in her Women’s 200m final race losing by just 0.06 second to Kristina Knott of the Philippines. The Singapore Management University student finished with a quick time of 23.85 seconds.

“It’s a very good start (to the season) for me,” said Shanti.

According to the current Women’s 100 and 200 metres national record holder, she needs to work on the transition going into the final 100.

“My coach said I need to work on (the transition), just getting used to that movement of coming out to the straight,” said Shanti.

The 22-year-old said the plan this year is to peak twice — once in July for the World University Games and once more at the end of the year for the 2019 SEA Games. To end off her race day, Shanti also raced in the new Mixed 4×100 Metre Relay Open, which pitted both men and women runners in a relay format.

“I was very excited to run it but (also) very scary because I need to chase a guy,” said Shanti.

In the other events, Tia Louise Rozario also felled the national record for the Women’s Triple Jump with a final distance of 12.16 metres, which clinched the silver medal for her at the Singapore Open.

The recent Joseph Schooling Sports Grant recipient, who will be studying in Princeton University, broke the previous national record of 12.05 metres, which was written into the books by Wendy Enn.

In the Women’s 100 Metre Hurdles Open, Kerstin Ong clocked a time of 14.94 seconds to clinch the bronze medal, while 17-year-old Reuben Rainer Lee also put in a commanding performance to edge out Brunei’s Mohamad Idris by just 0.01 second in the 200m Men’s Open for the gold medal.

The Ngee Ann Polytechnic student finished with a time of 21.64 seconds, which is just 0.03 second shy of the Under-18 national record he set at the start of the month at the South-east Asian Youth Championships.

In the Women’s High Jump event, Michelle Sng grabbed silver after jumping over a final height of 1.75 metres to equal her season’s best which she recorded in February this year.

Wei Bin’s timing is now the fastest electronically-timed (ET) mark by a Singaporean in the event — only behind Seah Soo Lye’s hand-timed 52.3s in 1983 — while Calvin’s timing sees him enter the top 10 local all-time rankings.