SEA Games Volleyball (Women): Singapore come from behind to defeat Myanmar 3–2 in thriller 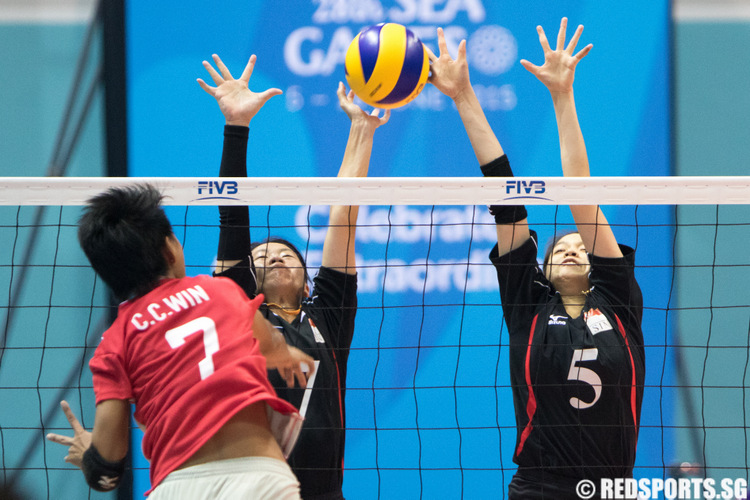 A dismal first two sets put Singapore in a hole and staring down the barrel of defeat. However, they stormed back in the next three sets to win the match and claim a spot in the semi-finals as the runners-up of Group B.

“The players’ hearts are very good,” said Singapore’s head coach Narita Akihiko. “I told them to play with their heart. They know what it takes to win because they have done it in training.”

Myanmar raced to a 5–1 lead to start the first set as Singapore took some time to settle into the match. Once they settled down, the hosts gradually trimmed the deficit, pulling to within one at 13–14, and then again at 18–19. However a late Myanmar surge ensured the visitors maintained their lead to take the set 25–21.

Singapore got going early in the second set, matching Myanmar point for point. Joelle Lim finally gave Singapore the lead with a massive spike down the line at 6–5. However, that advantage did not last long. Myanmar stormed ahead as careless Singapore play allowed them to take the second set comfortably 25–16.

The third was when Singapore attempted a comeback. They were playing more steadily and managed to hold a lead at the midway point of the set at 14–10. Despite a run by Myanmar to tie the game at 15–15, Singapore stretched their lead towards the end of the set. Lenis Phoa eventually secured the set at 25–17 with a spike through the middle as the comeback was on.

Joelle Lim was the star of the fourth quarter. Her powerful spikes from outside arrowed down the line and to the back of the court, proving simply too much for the Myanmar team to handle. Thanks to her, Singapore led 16–7 midway through, prompting a technical timeout from the visitors. Although Myanmar managed to pull one back after that, the outcome of the set was never in doubt as the home side took it 25–18.

With the sets tied at two-all, Singapore came out with guns blazing. At the halfway mark of the final set, Singapore led 8–3. Buoyed by the home crowd, the girls were simply unstoppable and finally sealed the set 15–10 to bag a memorable 3–2 win.

“I am overwhelmed by everything right now,” exclaimed Joelle after the match. “At the start of the match, I did not play well, but we hung in there. I could feel the whole team putting in effort and we finally made it. Our three years of hard work have paid off!”

“‘One after another’, we told ourselves throughout the match. We were told to keep trying and never give up. Coach told us to just keep looking forward to the next play – just forget the last play and get the next point. Challenge hard and challenge heart.”

“We must really thank the crowd today. They motivated us to go all out and try even harder. They were fantastic,” added the 23-year-old student.

Singapore will play Vietnam, the winner of Group A, in the semi-final on Sunday, June 14, 5pm at the OCBC Arena.