“It’s a lot easier for us knowing we have the support of the company so that I can earn my keep and still do what I like.” — Micky Lin, national netball team captain, on juggling sports and work at Deloitte 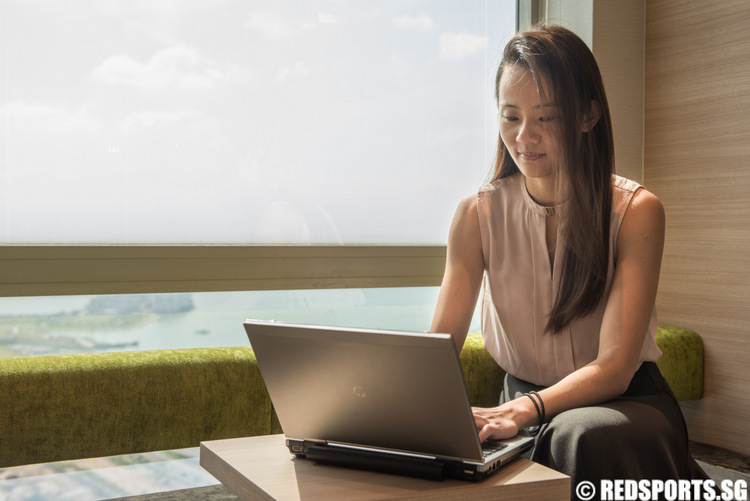 Micky Lin works with a view of the Straits of Singapore from 33 storeys up OUE Downtown 2, where Deloitte’s offices are located. (Photo 1 © Matthew Lau/Red Sports)

Deloitte, 6 Shenton Way, OUE Downtown 2 — Micky Lin Qingyi is the captain of the Singapore netball team and has 82 caps for the country. She can play in several positions including Goal Keeper, Goal Defence, and Wing Defence.

Having graduated from Singapore Management University in 2009, the 29-year-old started work for Marina Bay Sands in luxury retail marketing before recently taking up position as clients and markets assistant manager at Deloitte, one of the world’s largest professional services (audit, consulting, financial advisory, risk management, tax) firm and also one of 21 employers under the spexBusiness Network for Athletes.

In this interview, ahead of the Southeast Asian (SEA) Games in June and the Netball World Cup in August, she tells Red Sports how Sport Singapore’s Athlete Services and Development Department helped her land her current job through the spexCareer scheme, what her job entails, and how she juggles work and netball.

Red Sports (RS): What was your previous job exactly?

RS: How did you get connected with Deloitte?

M: It was actually through the spexCareer programme and Ndi Ng (senior manager, Athlete Services and Development Department, Sport Singapore).

[According to Ndi, Micky found out about the spexCareer scheme in August 2014, through the Singapore Sports Institute’s Job SMS Publicity on job opportunities for athletes. After identifying Micky’s career interests and aspirations, and based on then-existing openings amongst the group of 21 employers under the spexBusiness Network for Athletes, Micky was recommended for her current role at Deloitte.]

RS: How different is your current role as clients and markets assistant manager at Deloitte from your previous job?

M: Very different. In the past (in her former job), it’s probably more focussed on B-to-C (business-to-consumer). In Deloitte, I’m doing more B-to-B (business-to-business). I think it’s a good opportunity for me to learn stuff as well. I had been there (at MBS) for close to five years. The opportunity came, then I met James (Walton, Deloitte Deputy Clients & Markets Leader) at an event. So, I decided to try something new.

RS: In terms of juggling work with sport, how different is it with Deloitte from your previous company?

M: Definitely easier. Where I came from in MBS, they actually didn’t know I was a national athlete. I did tell my (previous) employer at the interview that I probably would have to take leave at some point of time to compete.

This year would be a bit more busy for us because there are the SEA (Southeast Asian) Games and World Cup coming. Usually, I’d go away for like a week-plus for each trip so a lot of coordination (to take leave from work) is required. I did tell my previous boss that I’d need to do that. What happened was that I actually took up a lot of my annual leave.

What is the main difference between them (her previous employers) and Deloitte is that Deloitte has a formal programme for national athletes. So, in the past, many times, when I needed to compete, I’d be like, ‘Will I get my leave approved this time round?’

RS: Tell us more about what you do in your current role.

M: I sit on the industries team at the moment. So what I do is support the financial services industry specifically, training up thought leaderships, and organising events.

RS: What is it about your job that excites or motivates you?

M: I think meeting new people. This is an area that I’m not very familiar with. Well, I learnt it back at the Singapore Management University, but that wasn’t really much interaction with the financial services and related matters. So meeting new people here and learning more about how the B-to-B world works, which was something I wasn’t exposed to previously. It’s quite interesting.

RS: Describe what a typical day or week is for you.

M: From Monday to Thursday, it’s pretty repetitive. Get up, come to work, leave on time for training. We’ve got court training on Tuesdays and Thursdays, and gym on Mondays and Wednesdays. That’s four standard days a week. I get Friday evenings off. It’s one of those days you go, ‘Where should I have dinner today?’ For this week, for example, Netball Super League is starting, so this is the first week we are playing, which means our weekends are taken up as well. Either one or two days, Saturday or Sunday or both days, but it’s a pretty short season. Basically, in a week, we train a minimum of four days, a maximum of about six.

M: 8.30am to 5.30pm. But I do sometimes take lunch hour to run to see a physiotherapist down the road or see a doctor.

RS: Is there any specific example of how Deloitte has supported you in your sporting pursuits and what sort of privileges under the spexCareer scheme do you enjoy that other athletes do not necessarily have under a company that is not on the scheme?

M: I won’t know the other side of the story so I won’t be able to make a comparison. But all I can tell you is that, in Deloitte, everyone knows what commitments you have and, so, they are able to support that. I’ve been here about four months now but, during that four months, I’ve taken leave to do Nations Cup, which was held in December, then there was the Asian Championships before that as well. It means that I could take time off to do those without having to worry. This year, there will be a lot more of that happening and we’re accorded paid special leave.

RS: What’s one significant milestone since you’ve joined spexCareer? How has spexCareer then contributed to that milestone?

M: Actually, my interaction with Sport Singapore and spexCareer, basically, is just the initial phase when I was introduced to Deloitte. So, after that, I dealt with Deloitte.

The expectation (at Deloitte) is you finish your work — try to finish as much of it as possible before you go — and then when you’re there (at training), people (from work) know what you’re doing and you’ll be left alone.

Some of them (colleagues from Deloitte) came down to watch the games as well.

M: I think it’s important that they (athletes) consider: Would they (the employers) be able to support me (in sporting pursuits)? And, with this programme, it just cuts that step out. It’s easier for us to go straight (to the spexCareer scheme) and there’s a list of companies that we know would be supportive of what we do.

RS: Was Deloitte the only company that was recommended to you when you spoke to Ndi or were other companies also in the mix?

M: There has to be a match (of position and person). If there is an athlete who has an ability and if Deloitte or, for example, other companies have a position that suits the ability, then the match can be made pretty quickly. At that point of time, Deloitte had that vacancy (that matched what Micky was looking for and her skills).

RS: How do you think corporations or employers such as Deloitte can gain from athletes like you?

M: There are many athletes who have benefitted…from the support from Deloitte. I think they’re doing a lot for us, especially in terms of the flexibility for us to train. I don’t think I have the busiest schedule. I think there are some other athletes with crazier schedules than us (netballers) and they compete around a calendar that actually requires them to travel every other weekend so, in that respect, it’s a lot easier for us knowing we have the support of the company so that I can earn my keep and still do what I like.

In terms of how Deloitte can gain from athletes like me, maybe we’re just tougher mentally or we know a bit more about teamwork. For me, because I come from a team sport, working with people should be easier since it’s not really different to working with 11 other women (in a netball team). Representing a team and talking to people, I think, also helps me to speak a little bit better to someone else.

I think it’s important that while we enjoy certain benefits from the company, we do as much as possible to return the favour back to them. That, to me, is a priority, and is important.