National B Div Netball: Methodist Girls’ and Raffles Girls’ have different reasons to smile as season draws to close 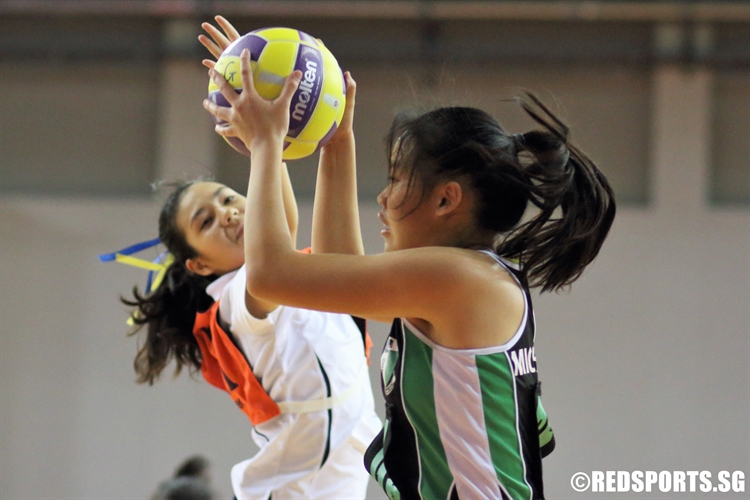 Michelle Ong (GS) of RGS catches a pass over the outstretched arms of her defender. (Photo 1 © Chan Hua Zheng/Red Sports)

OCBC Arena, Thursday, April 19, 2018 — Methodist Girls’ School (MGS) clinched third in the National B Division Netball Championship with a 31–25 victory over Raffles Girls’ School (RGS) as both schools ended their season on a positive note, albeit for different reasons.

RGS might have concluded their season with a defeat, but Emma Morgan (RGS GK) was a proud captain as she reflected on a season that saw her team attain their goal of a top-four finish.

“Throughout the season, we improved with each game we played. Even if we made a mistake, we always try to do better in our next game. Finishing in the top four is a great accomplishment and I am very proud of my team for our achievements,” shared the secondary four student.

Emma, who was playing in her final game for RGS, added: “Two years ago, this team finished in the top four (in C Division). To know that we are here again and to see how everyone has come together to make this happen is a touching moment.”

With the game tied at 7–7 in the first quarter, MGS captain Yu Jia Wei (MGS GS) turned the game on its head with three straight baskets to end the quarter and put her team up 10–7 at the first interval.

MGS led all the way from that point to secure the win, but not before weathering a furious RGS rally in the second half, which saw RGS cut the deficit to four after MGS had built a seven-point cushion.

MGS were determined to end their season with a satisfactory display after a disappointing semi-final defeat to CHIJ Secondary (Toa Payoh).

“After the semi-final defeat, and knowing that this was going to be the final game for the secondary four players, we really wanted to play to our best,” shared Tan Shu Yi (MGS WA), who is the vice-captain of her team.

Yu Jia Wei (MGS GS) credited her team for a job well done after they had to overcome several challenges during the season to get to this point.

“There were moments during the season when we had to deal with injuries and we were not confident if we could pick it up,” said Jia Wei (MGS GS).

With all the struggles that her team has had to face, Shu Yi (MGS WA) believes that this victory was a relief as much as it was necessary for her team to end the season on a good note.

She said: “We were struggling with our team spirit and we were not very confident. But I’m glad we ended the season with a win.”