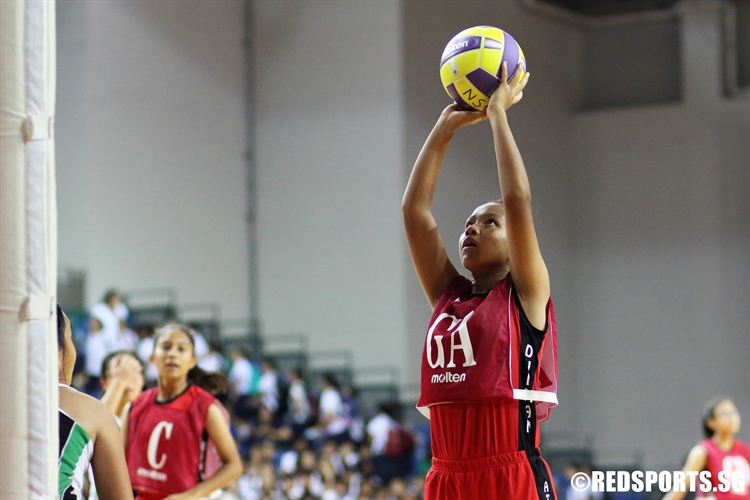 “We progressed a lot from the start to the end. I’m proud of everyone as we played better and showed our spirit as a team,” commented captain Caryn Chew, who started as Goal Defense for RGS.

Dunman started the game strong and hit their stride early as they displayed crisp passes as they were able to move the ball up-court to create scoring opportunities.

RGS had a shaky start where they struggled with turnovers from mistimed passes. However, they soon recovered from their slow start to find their rhythm on offense and make a high percentage of their shots.

The first half turned out to be evenly contested, as both teams headed into the half-time break tied at 16 apiece.

The third period saw RGS start to pull away as they fed the ball to Anna Macinnes (GS), who took advantage of her height and reach to catch lob passes near the basket for scoring opportunities.

RGS would hold a slight 24–22 lead heading into the final period.

The final period would be a tightly contested one, as both teams traded baskets with one another.

A resilient Dunman team constantly kept RGS within striking distance and they would cut RGS’ lead to 30–29 with 2:57 remaining.

However, RGS would seal the game by outscoring Dunman 6–1 over the final 2:57 with Anna Macinnes (GS), who shot 12 for 14 in the final period, scoring all 6 points.

“It was a very enriching and meaningful season. It was fun and worthwhile as our training and hard work paid off,” Caryn Chew added, looking back on this past season for the team.