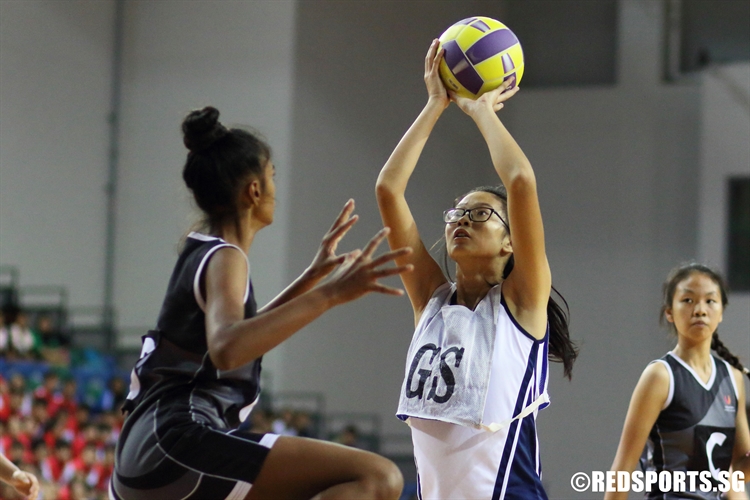 The dominance on the netball court continued for CHIJ Secondary (Toa Payoh) [HIJ] after a 49–26 victory over Singapore Sports School (SSP) in the National B Division Netball Championship final secured the school’s fourth straight national title.

More impressively, CHIJ (Toa Payoh) had won every single one of their games in both the zonal and national rounds during this four-year stretch.

This victory also gave CHIJ (Toa Payoh) the C and B Division netball double for the third time in the past four years.

“It was a very tough season. We started our pre-season during November last year and focused on building stamina and a good chemistry among our players on the court,” shared Tina (HIJ captain).

“To be able to defend the title from last year with a different group of players and having to face unfamiliar and stronger opposition was tough. It was a really good season and for both teams to win (the national title) was overwhelming,” she added.

The opening quarter was a tight affair as CHIJ (Toa Payoh) headed into the first interval with a marginal four-point, 10–6 lead.

CHIJ (Toa Payoh) made key interceptions in the second quarter to fuel a 10–4 run and built a double-digit lead for the first time in the game with 2:39 remaining in the period.

Despite falling short of their title-winning aspirations, Alysson Faith Stewart (SSP captain) was all smiles as she showed her appreciation for her team and reflected on a season that saw them hold a perfect 18–0 record heading into the national final.

Alysson (SSP captain) said: “We were aiming to be national champions and they (HIJ) knew we wanted it really badly. We had a very good season and our staff support was a strong motivation for making us want to do better.”

“I’m very grateful to have led this team. Everyone is so encouraging and we are just a cheerful lot,” she added.

“It was a sad loss but I hope we can come back stronger next year and get the title back,” she remarked.

Coach Kok Mun Wai, who has been coaching the netball programme of CHIJ (Toa Payoh) for the past 26 years, recounted that her teams have had to deal with several injuries throughout the season.

“We managed it (the injuries) by letting the girls play half the game and by toning down the training sessions. Both the B and C girls had injury concerns throughout the season, especially in the nationals, but this is part and parcel of the sport,” shared Coach Kok.

CHIJ (Toa Payoh) reigned supreme once again in a season which saw them bag all four titles on offer — the South Zone title and the national crown for both divisions.

The school has now won 26 national titles across both divisions with Coach Kok at the helm, and it might not be long before the netball programme adds to its illustrious trophy haul.