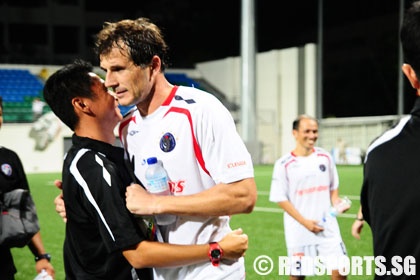 Aleksandar Duric gets a hug from his coach Richard Bok after SAFFC wrapped up the S.League title in early October. Despite rejecting the Sriwijaya offer, it is not certain that Duric will stay with SAFFC. (Photo © Lai Jun Wei/Red Sports file photo)

National striker Aleksandar Duric, 39, may not be playing in the Indonesia Super League (ISL) next year after all.

It is understood that the deal fell apart after Sriwijaya FC did not deliver on the terms. Duric just returned from Vietnam today after playing for Singapore in an international friendly tournament.

When asked why he was not going, Duric said:

“Simple, they try to mess me up with my contract. I agreed to sign when I was there last week and two days ago Sriwijaya sent me the new contract and it had nothing which I had already agreed on. So I told them it’s off.”

There has been a exodus of national players from the S.League in the last few months after the ISL allowed their teams to have three imports and two players from Asian Football Confederation (AFC) countries.