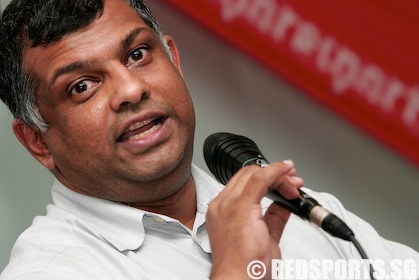 Singapore Sports Council, Thursday, March 5, 2009 – 14 individuals and companies are interested in setting up teams to take part in the inaugural ASEAN Basketball League (ABL), according to ABL chairman Tony Fernandes.

Tony Fernandes, who is also the chairman of budget carrier AirAsia, launched the ABL franchise document today at a press conference.

Prospective team owners will need to furnish a US$1 million banker’s guarantee and each team will be made up of two imports, two ASEAN players, one player with one parent from ASEAN, and seven local players.

The 14 individuals and companies were not named because “they don’t like to lose,” said Chairman Fernandes.

This year’s league is expected to start in September 2009 and run for five months until February 2010. Indonesia and Philippines will probably field two teams because of their population size and in the case of Philippines, tremendous interest in the sport. Singapore, Malaysia, Thailand and Brunei are expected to field one team each. The Singapore Slingers are expected to be Singapore’s representative.

There is tremendous interest in Philippines, Malaysia, Indonesia,” said Fernandes. “This is a product people want. We will provide low-cost, high quality entertainment.”

All teams will be independently owned by franchise owners while the ABL will focus on marketing the league and negotiate league-wide sponsorship and television deals. To qualify for a franchise, team owners will need to develop a youth programme to bring in local talent. The ABL will announce the franchise owners on April 30th.

Singaporean Hong Wei Jian, 23, who suited up for the Slingers last season, is in the frame for one of the spots on the squad given the emphasis on local talent.

“The new set up will mean the team might not be as strong as the former Slingers,” said Wei Jian. “But it is good exposure for Singaporeans. We’ll have more playing time.”