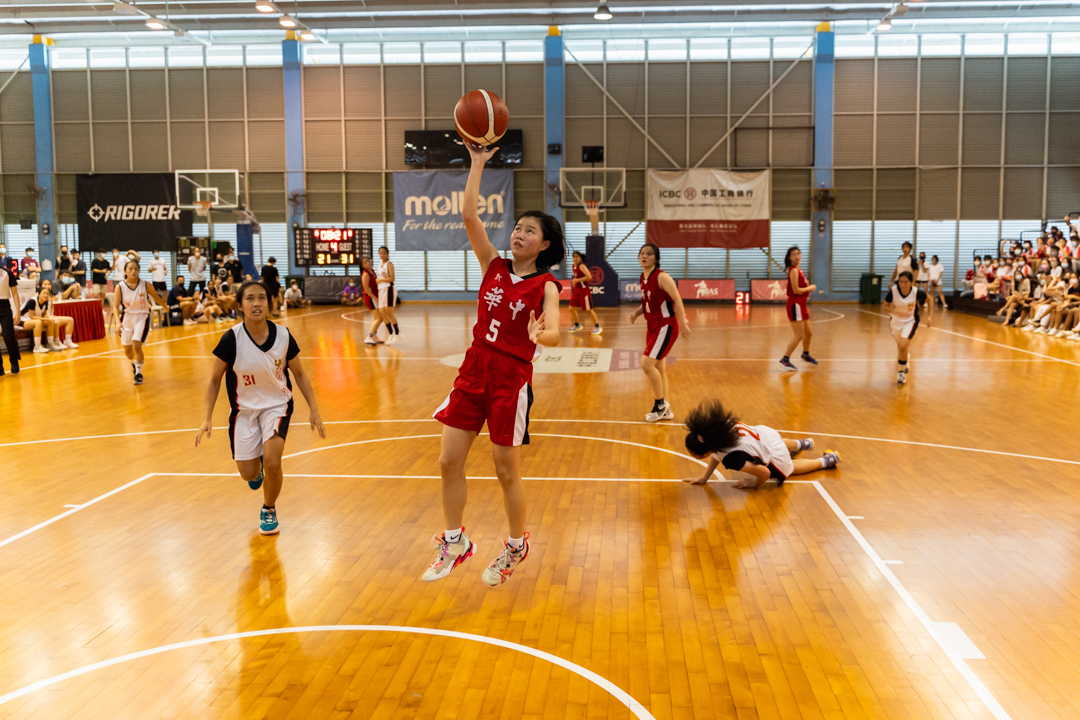 Singapore Basketball Centre, Monday, May 23, 2022 — Chasing their school’s first title since 2015, Hwa Chong Institution (HCI) overcame a spirited performance from underdogs National Junior College (NJC) to clinch redemption on behalf of their seniors and emerge triumphant in the 2022 A Division girls’ basketball final.

With 10 A girls’ trophies since 2003 prior to this year but having come short at the last hurdle in two out of the last four editions of the championship from 2016 to 2019, the HCI class of 2022 made their mark and finally reclaimed the title after seven years with a 44-30 victory over a gritty NJC side, who were making their school’s first final appearance in the girls’ A Division, in the past decade at least.

“Before the season started, we already had that goal in mind… to get (the title) back, for our seniors, for our school, for everybody that worked so hard and put in the effort behind the scenes,” said HCI captain Mindy Peck (#8), who was also awarded the Most Valuable Player (MVP) in the final.

Teammate Huang Kaining (HCI #5), who scored a game-high 12 points, pitched in: “I think that today, everyone played with the same goal, we all wanted to clinch the championship… and I feel that everyone worked hard, went for every ball, so I’m very proud of my team.”

Both sides had gone into the final unbeaten over five games, with HCI narrowly beating Nanyang Junior College 27-23 and NJC edging out defending champs Raffles Institution 31-21 in the semis.

The HCI team, most of whom had played together in Nanyang Girls’ High School (NYGH) colours when they clinched the 2018 and 2019 C Division titles, started the final on the front foot from the tip, going 6-0 up via MVP Mindy (#8), Li Shilin (#24) and Moht Moht Myint Kyaw (#11). Zhang Ruoyi (HCI #7) was also a constant menace to the NJC defence with her barging runs into the offensive paint.

But within a chaotic last three minutes of the opening quarter, NJC’s Jovita Lee (#21) and Lai Rou Yin (#31) first cut the deficit to just one point before Myint Kyaw (#11) extended HCI’s lead again at 8-5, until Jovita (#21) equalised the scores with a three with 25 seconds left on the clock.

The see-saw exchanges resumed in the second period of 10 minutes, with NJC taking the lead for the first time in the game at 10-8, before HCI clawed back with seven straight points to take the advantage at 15-10. NJC hit back, 15-12. HCI responded, 17-12. NJC’s eventual top scorer Jovita (#21) sunk a buzzer-beater three-pointer to reduce the margin to two but Kaining (HCI #5) replied with a three of her own to get HCI a 20-15 lead going into the mid-point interval.

The start of the penultimate quarter saw HCI increasing their advantage to 23-15, but again, the NJC girls refused to back down with two successive lay-ups on the fast break. HCI then pulled away thereafter, as Sarah Goh (#13) capped off the quarter by intercepting possession and keeping her composure on the lay-up to put her side 30-21 up in the last few seconds.

NJC, already on a fairytale run in the competition, gave it their all in the final 10 minutes but their efforts came to nought as HCI defended their lines well to take the game 44-30.

NJC captain Yong Lok Qing (#16) was still all smiles after the final after reflecting on a season which exceeded her team’s own expectations.

“At first we were a bit disappointed, but afterwards, you know, we still made history… we’ve never gotten second for Nationals,” said Lok Qing.

“I think today we fought really hard… if there’s one thing that we have, it’s the fight in us… no matter how big the score, we’re still gonna fight,” she added.

Kaining (HCI #5), who was the NYGH captain when her team won the C Division title in 2019, played down her personal contributions in the final and paid tribute to her team’s resilience throughout a challenging season.

HCI captain Mindy (#8) recalled some of the challenges throughout the season such as transiting from 3v3 to 5v5 basketball as the nation eased measures in stemming the pandemic, as well as some of her teammates contracting the Covid-19 virus which ruled them out of the competition altogether.

“(The challenges) trained us… we really had to refocus and count on the ones that were well,” Mindy said.

On her team’s performance in the final, she added: “We had a strong mindset, and we really fought back in the second part of the game. We worked really hard and defended very well.”